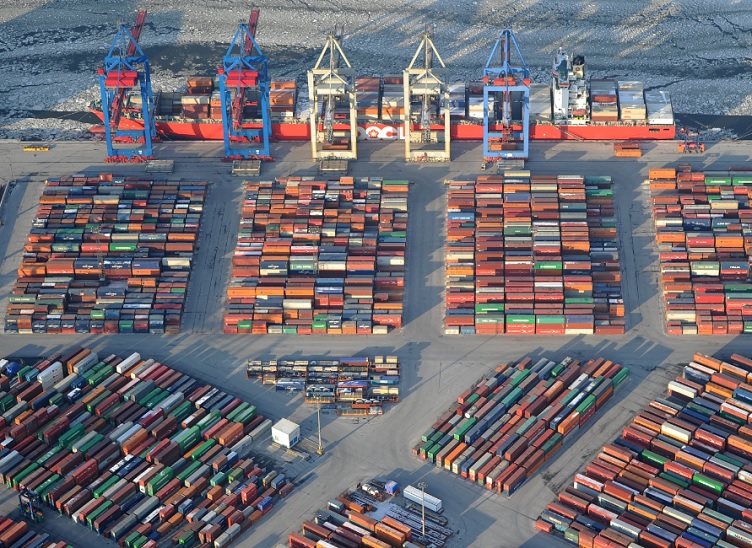 The Port of Rotterdam saw its throughput rise 9.3 percent in the first half to 6.6 million TEU. Credit: PA

The solid increase in container volume being reported by the world’s carriers in the first half of 2017 was mirrored by global port throughput that is on track for its strongest year since 2011.

Container throughput at 250 ports around the world grew by an estimated 6.7 percent in the first half, according to a survey by Alphaliner. The container shipping analyst said it expected global throughput growth to reach a six-year high of 6 percent year on year.

Alphaliner's report and forecast mirrors the outlook Drewry gave last week. The London-based analyst said volume in the first half rose 6.6 percent, after surveying 150 ports, and said growth is building to the fastest pace in six years.

The port strength follows increasing year-on-year container volume transported by carriers in the first half. Hong Kong-listed OOCL volume was up almost 7 percent, and Maersk Line carried 2 percent more volume in the first half.

Container Trades Statistics data reveal that Asia-Europe volume for the first six months grew by 2.7 percent to 4 million TEU, although some individual routes on the trade showed far stronger growth. China to the East Mediterranean/Black Sea, for instance, was up 12.6 percent.

On the trans-Pacific, US imports in August could reach record levels. Global Port Tracker, which is published monthly by the National Retail Federation and Hackett Associates, forecasts that August will be the busiest month ever, with imports predicted to rise 2.1 percent from August 2016. IHS Markit Senior Economist Mario Moreno recently upgraded his growth projection for US containerized imports in 2017, to 6.6 percent from 6.1 percent earlier.

The strength of the container shipping market was reflected in the world’s 20 largest container ports, where only two ports — both in Malaysia — recorded negative growth in the first half. Port Klang was down 3.1 percent and Tanjung Pelepas was 4 percent down compared with the first half of 2016.

Leading the Alphaliner table was the world’s busiest container port, Shanghai, that saw throughput in the first six months of 2017 shoot up just shy of 10 percent to 19.6 million TEU. Singapore was up 6.4 percent to 16.1 million TEU, with Shenzhen third at 11.8 million TEU.

The 250 ports in Alphaliner’s survey have a combined annual throughput of more than 550 million TEU. Total volume growth powered ahead in the second quarter to reach 7.4 percent, ahead of the 5.9 percent recorded in the first quarter of this year.

Positive growth was recorded across all regions in the first six months of the year, led by South Asia ports that recorded the strongest growth rate of 9.3 percent, while the Middle East region lagged behind the rest of the world, growing by only 3.1 percent. Among the main regions, China and the US ports posted the highest first-half growth rates of 8.4 percent and 8.2 percent, respectively.

Alphaliner said the port growth momentum was expected to continue in the second half, with the latest data for July also showing very strong figures. This view was supported by Maersk Line Chief Commercial Officer Vincent Clerc, who said the global market environment was recovering.

“We are seeing increasing demand across all trades, and the fact that we can hold on to our guidance of a $1 billion profit improvement this year on the loss of 2016 is a sign that the fundamentals of the industry are good,” he told JOC.com.

“The second quarter was the first hardcore evidence of a rebalancing of supply and demand. There is much stronger demand and the order book is at its lowest level in a decade.”

“This steady improvement in the supply-demand balance is not a sign of a booming market – we are far from that,” he said. “However, it does mean that for the first time since the onset of the global financial crisis, the supply-demand balance is not worsening year on year. This is a significant shift, and if it holds, then the industry will at least have the chance to start to absorb some of the excess capacity that exists.”