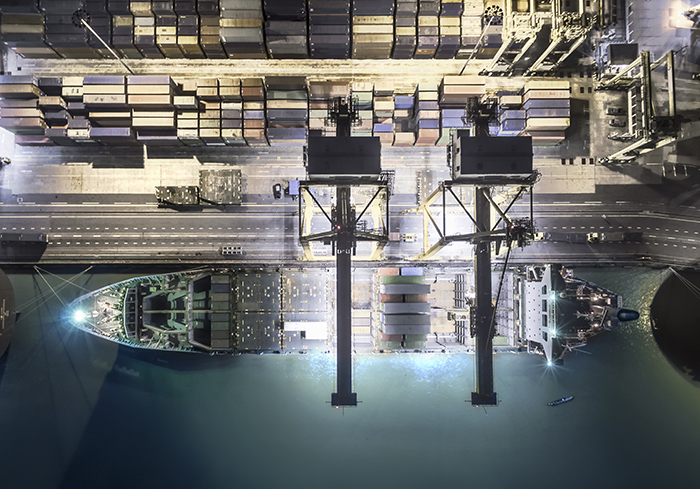 Cranes at ports around the world have been lifting more containers than last year.

Shipping analyst Drewry will be reassessing its volume forecast for this year and 2018 as world container throughput heads for its fastest growth in six years.

The vast majority of that growth is coming from the major east-west trades where volumes are up sharply on the first half of 2016. The year-over-year comparisons are favourable, and data from PIERS, a sister product of JOC.com, CTS, and Datamar show that overall, the east-west trades are up 5.6 percent on the first six months of 2016.

Asia-Mediterranean routes led the recovery with volume up just shy of 10 percent, with Asia-North Europe container volume up 4 percent compared with the first half of 2016. Demand in the first half of last year was very weak, which makes the comparison so favorable, but even so, Drewry said there is little doubt that the final-year figure for 2017 would eclipse anything seen in the past two years.

“All of the available container traffic datasets for this year point towards a much faster-growing environment than was previously forecast,” the analyst said in its Container Insight Weekly. “The surge in container handling has been evident since the back end of 2016, and as it has gathered momentum we were forced into a fairly radical reassessment of our forecast for both this year and the next."

Drewry said it expected the second half of the year to deliver similar volumes as the first half, although because of the tougher comparisons the growth rate might not be quite as strong. How much of a lift there will be in the traditional third-quarter peak-season was debatable as volumes have smoothed out significantly in the past few years, with the surge of online shopping spreading buying patterns more evenly through the year.

Port statistics Drewry compiled from a sample of nearly 150 sites around the world indicated that container handling grew by 6.6 percent in the first six months of the year, and deep-sea and regional trade numbers were showing similar progress.

“World port throughput growth was barely a thing in either 2015 or 2016, and if the current rate for the first half 2017 as suggested by our sample ports holds true for the remainder of the year, it will have been the fastest growing year since 2011,” Drewry noted.

“As expectations brighten, more companies are now willing to build up stocks and call upon the services of shipping lines, having let them dwindle during more bearish times,” Drewry said. “As well as greater business and consumer confidence, there have been recovery plays in a number of economies whose prosperity is tied to the price of oil, while the easing of sanctions in Russia and Iran has also added to the container pot.”

Earlier this year, Drewry predicted that the container shipping industry would close the year with an operating profit of around $1.5 billion, driven by higher freight rates and rapidly growing cargo demand. Drewry in July upgraded that forecast to $5 billion as a result of the uptick in pricing and demand through the first half of this year.

Although the rising demand comes at a good time for carriers taking delivery of large new vessels, another container shipping analyst, Alphaliner, said the steady flow of ultra-large vessels into service on Asia-Europe at the rate of one a week would continue to put pressure on the supply-demand balance.

During the first six months of this year, 26 ships of more than 14,000 TEU were delivered, according to Alphaliner, and a further dozen newbuildings of this size were expected to join the container shipping fleet at a rate of at least one per week before the annual low season begins in October.

Canada Trade and Shipping Outlook
TPM22: What We Learned — Container Shipping in the Crosshairs
Managing E-Commerce From Order to Delivery and Beyond
END_OF_DOCUMENT_TOKEN_TO_BE_REPLACED