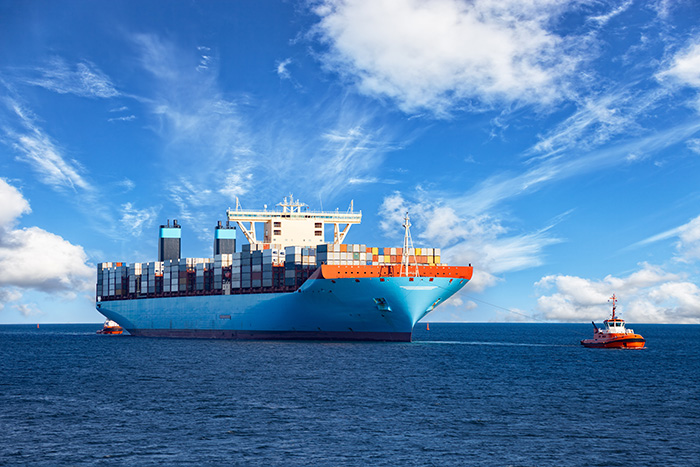 Global container volume increased by 4 percent to 146.4 million TEU, but that was down from the 5.6 percent growth recorded the previous year. Photo credit: Shutterstock.com.

A slowing world economy put the brakes on container growth in 2018, but global volume is expected to reverse this trend over the next two years with a solid increase in throughput forecast on the major trades.

Data from IHS Markit show that while 2018 global volume increased by 4 percent to 146.4 million TEU, it was down from the 5.6 percent growth recorded the previous year.

But the declining growth is expected to turn around in 2019, with demand from the five largest container exporting nations — China, the US, South Korea, Japan, and Thailand — growing at a rate of about 4.8 percent a year through 2025 before slowing to 4.3 percent by 2030, according to the latest IHS Markit Trends in the World Economy and Trade report.

“From a historical point of view, this is a major change compared with the double-digit growth rates the industry became accustomed to, but we must accept that globalization appears to have worked its way through the global sourcing system and that we are now back to depending on straightforward demand,” the report stated.

The Shanghai International Shipping Institute (SISI) released its own report this week that found a slowdown in the world economy, escalating trade frictions, and weak consumer markets in 2018 held global volume growth to 4.7 percent, slightly down on the previous year.

A closer examination of the major trades and the hub ports that handle the majority of international container trade reveals a mixed bag in terms of growth prospects.

IHS Markit has forecast a 3 percent increase in volume on the Asia-Europe trade in 2019, followed by a 3.2 percent bump in 2020 and a further expansion of 3.6 percent in 2021. Volumes of exports from Asia to Europe were essentially flat over the first two months of 2019, according to data from Container Trades Statistics (CTS), rising almost 11 percent year over year in January before falling almost 15 percent in February. European exports to Asia are forecast to grow by 4 percent year over year in 2019, followed by 3.3 percent and 3.4 percent expansion in 2020 and 2021, respectively.

In its report, SISI said an increase in bilateral trade between China and the European Union helped container throughput at major ports in Europe to rise 5 percent year over year to 135 million TEU.

At the other end of the Asia-Europe trade, China’s container throughput growth dipped in 2018, with volume rising 5.2 percent compared with an 8.3 percent increase the previous year. SISI said the still-solid growth was largely driven by domestic demand as a result of China’s strict environmental policy that forced coal and other goods previously transported as dry bulk by truck to be shipped to ports in containers. That contributed to robust growth of container shipping in the domestic China trade, where volume grew 9.2 percent year over year.

Of the 10 busiest container ports in 2018, only two recorded volume declines in 2018 — Hong Kong and Dubai. Container throughput at Hong Kong port slumped 5.6 percent to 19.6 million TEU in 2018 and continued its slide into 2019, recording a 10 percent decline in first-quarter volume compared with the first three months of last year. Dubai posted a 2.9 percent drop to 14.9 million TEU last year that DP World group chairman and CEO Sultan Ahmed Bin Sulayem said was a result of a focus on profitable cargo, rather than low-margin goods. First-quarter volume fell 0.6 percent year over year, but the CEO is expecting an improvement in the second half.

Leading the throughput chart again in 2018 was Shanghai, which handled 42 million TEU, an increase of 4.4 percent. Singapore was the world’s second-busiest port at 36.6 million TEU, an 8.7 percent year over year increase that was a reflection of the strong growth in Association of Southeast Asian Nations (ASEAN) economies.

Container volume in intra-Asia, the world’s busiest trade, grew 3 percent in 2018 to 30 million TEU, and IHS Markit has forecast growth of 5 percent a year beyond 2021.

On the trans-Pacific trade between Asia and North America, IHS Markit said the 5 percent growth in volume in 2018, partly a result of shippers front-loading imports from China ahead of US tariffs, would fall to 3.3 percent growth in 2019 before rising back to 5 percent in 2020. In the first quarter, despite the seasonal Chinese New Year slump in February, US imports from Asia are up by 5.7 percent year over year, according to CTS.

SISI said the strong growth in the US economy in 2018 drove the growth in container volume, but Canada and Mexico saw trade friction and disputes over tariff rate quotas with the US continue to simmer. This dragged on overall North American economic growth, with total container throughput rising 6.1 percent to 67.6 million TEU in 2018.

Statistics from PIERS, a sister product of JOC.com within IHS Markit, show that US exports to China were down 24.5 percent in 2018 as Beijing imposed retaliatory tariffs on US goods. For North America, IHS Markit is forecasting a 4.4 percent growth in exports this year, but US exporters are expecting a dismal year.

According to the IHS Markit trade report, container trade from Europe to North America grew 4.8 percent to 4.96 million TEU last year, with the report forecasting 5 percent growth for 2019 and 3.3 percent growth in 2020. North American exports to Europe surged 14.5 percent year over year to 3.48 million TEU in 2018, more than 400,000 containers above the amount shipped in 2017. IHS Markit has pegged volume growth for eastbound trans-Atlantic containers in 2019 and 2020 at 2.7 percent and 4 percent, respectively.