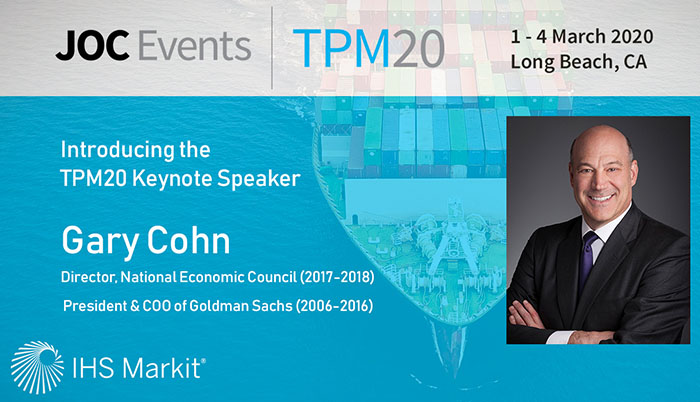 An ardent free trader, Mr. Cohn has a unique perspective of trade policy that will resonate with major retailers, manufacturers, and other shippers of containerized cargo who attend TPM.

Gary Cohn, former director of the National Economic Council under President Donald Trump and former president of Goldman Sachs, was named as the opening keynote speaker of the 20th TPM, the world’s largest container trade conference, organized by IHS Markit.

An ardent free trader, Mr. Cohn has a unique perspective of trade policy that will resonate with major retailers, manufacturers, and other shippers of containerized cargo who attend TPM, as well as the ocean carriers, forwarders, terminals, and other players whose supply chains and operations have been severely impacted by the United States-China trade dispute since the first tariffs were imposed in early 2018.

Mr. Cohn served as assistant to the president for economic policy and director of the National Economic Council from January 2017 through April 2018. As President Trump’s chief economic adviser, Mr. Cohn managed the administration’s economic policy agenda and led the successful effort to grow the US economy through historic tax and regulatory reform. Prior to his White House service, Cohn was president and chief operating officer of Goldman Sachs, where he worked for more than 25 years.

“There is not a single BCO [beneficial cargo owner], carrier, forwarder, or other participant in container trade that was not in one way or another affected by the US-China trade dispute and broader trade policies of the Trump administration. Gary Cohn is a passionate free trader, having cautioned against the use of tariffs in trade policy while serving in the White House and since leaving office,” said Peter Tirschwell, vice president, maritime & trade, IHS Markit.

TPM, the world’s largest container shipping conference with some 2,700 attendees representing every segment of the global containerized supply chain, will be celebrating its 20th edition when it convenes next March 1-4 in Long Beach, California. Over the course of the four days, the event will feature more than 130 thought leaders addressing today’s pressing global trade and supply chain challenges and emerging solutions.