Fuel costs ‘not an issue’ for container shipping industry: Yergin

Fuel costs ‘not an issue’ for container shipping industry: Yergin 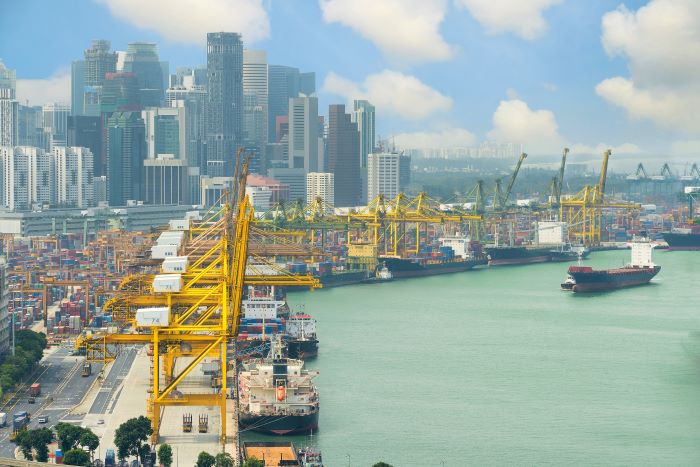 Very-low sulfur fuel oil in Singapore was assessed Wednesday at $270 per metric ton, down 63 percent from $740/mt in early January. Photo credit: Shutterstock.com.

While global freight markets face a host of challenges driven by the coronavirus disease 2019 (COVID-19) pandemic, fuel costs are not one of them, one of the world’s leading energy experts said Thursday.

“Oil prices will continue to be ... more than reasonable, and that will be good for [the transportation] business,” said Daniel Yergin, vice chairman of IHS Markit, parent company of JOC.com. “The challenge will be to get the containers filled with goods.”

Global oil prices have crashed in recent weeks, driven lower by a dramatic drop in demand due to COVID-19 and the collapse of a crude production alliance between OPEC and Russia. Global benchmark Brent crude settled $1.19 higher Thursday to just over $26 per barrel, bouncing off a 17-year low on Wednesday.

“Fuel costs will not be an issue for the container shipping industry,” Yergin said during the JOC webcast, TPM20: What We Missed — The Economic, Trade and Container Shipping Outlook.

For container lines, the drop in bunker fuel prices will provide a cash infusion because fuel surcharges, or bunker adjustment factors (BAFs), won’t be recalculated for another month or two.

In a larger sense, the diminished threat of fuel price spikes removes a headwind for a battered industry, which in the past has seen quarterly profitability plunge after unexpected fuel increases. Carriers have levied emergency fuel surcharges, most recently in 2018, following fuel price spikes with mixed success, because many service contracts include language prohibiting such extra surcharges.

As expected, the collapse in crude prices has had a knock-on effect for bunker fuel markets. Very-low sulfur fuel oil (VLSFO) in Singapore was assessed Wednesday at $270 per metric ton by the Oil Price Information Service (OPIS), a sister company of JOC.com within IHS Markit. That is down an astounding 63 percent from $740/mt in early January.

Prior to the price crash, analysts estimated the liner industry would incur additional costs of $10 to $15 billion a year due to the International Maritime Organization’s low-sulfur fuel mandate that went into effect Jan. 1.

Yergin drew a direct link between the spread of the coronavirus and the collapse in oil prices, noting that the sharp drop in Chinese oil demand as that country went into lockdown eventually precipitated the fraying of the crude output alliance between Russia and OPEC, primarily cartel kingpin Saudi Arabia.

IHS Markit, in a research note two weeks ago, forecast that world oil demand would decline by 3.8 million barrels per day year on year in the first quarter “owing to the unprecedented stoppage of Chinese economic activity in February and the spread of the coronavirus disease 2019 (COVID-19) outside of China.”

It was under that cloud that OPEC met on March 6 in Vienna, with the Saudis pushing for new production cuts to halt the price decline. But Russia balked, not wishing to yield further market share to the US and its growing shale oil output. When a deal fell apart, Riyadh responded by flooding the market with crude, sending prices into a tailspin.

But Moscow has the upper hand, he believes. “Our view is the Russians have more staying power,” Yergin said. “Their economy is more diversified.”

The Saudis may also start feeling the heat from Washington. While low gasoline and heating fuel prices are normally good for the consumer, and helpful to incumbents in an election year, Yergin noted the Saudi strategy of flooding the market has the US concerned that an already volatile economic situation is being further inflamed.

“I think we’ll see increasing pressure from Washington, perhaps aimed more at the Saudis,” he said.

Editor's Note: Parts 2 (El Dorado/LogTech) and 3 (Trucking/Intermodal) of the JOC TPM20 What We Missed webcast series will be held March 26 and April 2, respectively. Information on those sessions, including links to registration, is available at: joc.com/webcasts