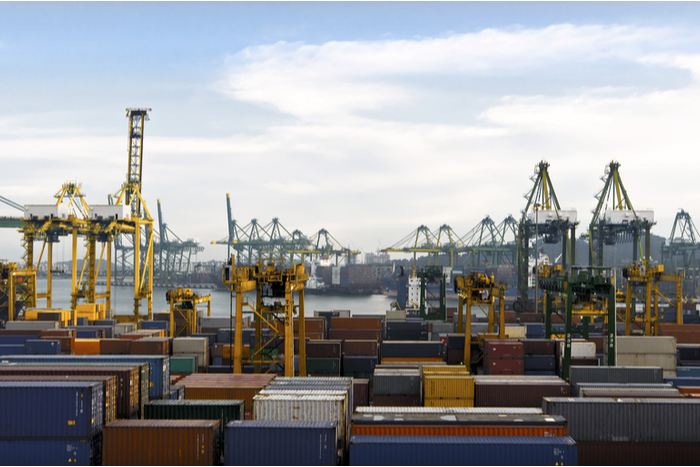 The lack of ocean container shipping space on the Asia-Europe trade is a supply-side issue rather than being driven by demand, carriers say. Photo credit: Shutterstock.com.

Carriers are deploying greater levels of capacity on the Asia-North Europe trade despite relatively flat growth in volume, but the injection of supply is being countered by congested ports delaying vessels and inland logistics bottlenecks slowing equipment turnaround.

This dynamic, also playing out on the trans-Pacific, is keeping spot rates at red-hot levels while heaping pressure on European manufacturers that are struggling to manage supply chain delays and meet regional demand.

Data from container shipping visibility provider eeSea show Asia-North Europe capacity growth in August 2021 increasing 29 percent versus the capacity deployed in July and up 11 percent versus June. August capacity was up 34 percent year over year.

Yet even with the addition of capacity, rates continued their sharp rise through August. The average rate was $7,255 per TEU in August compared with $941 per TEU during August 2020, and around $760 per TEU in pre-pandemic August 2019, according to rate benchmarking platform Xeneta.

The increase in rate levels this year far outstrips the growth in volume on the China-North Europe trade. While volume for August is not yet available from Container Trades Statistics (CTS), the July volume is up just 2.4 percent compared with July 2019. Average rate levels in July of $6,745 per TEU were more than nine times higher than those in 2019.

Capacity deployed on the Asia to North Europe and Mediterranean trade has risen 19.7 percent in the last 12 months compared with the previous year to 5.25 million TEU, said Peter Sand, chief shipping analyst at shipping association BIMCO. But, he said, the additional capacity is being offset by the market disruption.

“Even with these extra ships, carriers are struggling to meet their scheduled departures, which leads to cancellations of sailings or port calls because the supply is not there rather than due to a lack in demand,” Sand wrote in a container shipping update released Wednesday.

“Adding capacity on already congested trade lanes does little to solve the fundamental problems,” he added. “The limiting factor is not capacity onboard ships, but rather how many containers the ports and hinterland connections can manage, as well as storage space in temporary container yards and final destinations.”

Michael Braun, vice president of customer solutions for Xeneta, told JOC.com that there was no real peak in demand on Asia-Europe, but there was so much capacity stuck in terminals and waiting outside ports.

“It’s not that there are not enough ships to handle the demand; it is the congested supply chain that cannot handle the backlogs, and that is causing the disruption all around the globe,” he said.

Poor service ‘outside our control’

Carriers have come under fire from shippers frustrated that soaring rates have come with poor service levels. The latest schedule reliability data from Sea-Intelligence Maritime Analysis for July show carrier on-time performance falling to 22.2 percent compared with 90 percent in July 2019.

However, carriers have defended their poor performance by blaming factors outside their control. A Maersk spokesperson told JOC.com this week that a shortage in capacity and secondary equipment was a result of slow port operations and delays, pushing up rate levels on Asia-Europe despite more vessels being deployed on the trade lane.

The spokesperson for another major carrier who declined to be identified said both peak-season demand and increased turnaround times for containers were largely responsible for the current market issues.

“Even if there is more capacity and equipment deployed by the carriers, the bottlenecks remain at the ports and terminals, which means there is a limitation in the system to what capacity can be handled within a given period of time,” he said. “This kind of capacity is not flexible and cannot be increased overnight, for example by building a new port or adding a new terminal in a congested port.”

Jeremy Nixon, CEO of Ocean Network Express, was on the same page, albeit in a global context, during an Aug. 30 interview with JOC.com. “Landside port and intermodal transport delays, plus additional customer container dwell times, have adversely combined to seriously and negatively impact global network capacity,” Nixon said.

“Without these largely COVID-induced industry root causes, there would be adequate capacity in the system to handle current demand,” he added.

The supply-side disruption continues to make life difficult for European manufacturers, according to Chris Williamson, chief business economist at IHS Markit, the parent company of JOC.com.

“The overriding issue was again a lack of components, with suppliers either unable to produce enough parts or are facing a lack of shipping capacity to meet logistics demand,” Williamson said in his analysis of the IHS Markit Eurozone purchasing manager’s index (PMI®) for August. “These supply issues were the primary cause of a shortfall of manufacturing production relative to orders of a magnitude not previously recorded by the survey, surpassing the 24-year record deficit seen in July.”

The Caixin China General Manufacturing PMI™ for August also saw a deterioration in business conditions, which IHS Markit attributed to the country’s tough measures to curb the spread of coronavirus disease 2019 (COVID-19) that were slowing production.

"Both supply and demand in the manufacturing sector shrank as the COVID-19 outbreaks disrupted production,” Wang Zhe, senior economist at Caixin Insight Group, said in his analysis of the August PMI™ survey responses. "The gauges for output, total new orders, and new export orders all dropped into negative territory. Exports fell amid logistics disruptions and as the pandemic continued overseas.”

Following the partial COVID-related closure of Yantian International Container Terminal for most of June, work at Ningbo-Zhoushan port’s Meidong container terminal was suspended for two weeks in August, with the resultant ship bottlenecks having knock-on effects on the major trades out of China.

Sand said COVID-19 concerns were affecting the China PMI™ because the issues raised by respondents to the survey were very real. “The (COVID-19) measures taken are holding back production and will until adjusted guidelines are implemented that soften the government’s zero-tolerance stance in a way that the economy isn’t harmed, as was the case with the handling of the most recent shipping-related incidents at Yantian and Ningbo-Zhoushan,” he said.

Dominique von Orelli, vice president and global head of ocean freight at DHL Global Forwarding, said the impact of the disruption on Chinese orders was also being seen among the forwarder's customers. “The fact is that customers are reluctant to order due to the uncertainty, and order very early or not at all,” he told JOC.com.

McKinsey and Co. put a figure to the global capacity effectively being tied up by the disrupted container shipping markets, estimating in a recent market update that global container carrying capacity has dropped 11 percent since September 2020 as a result of port congestion in Asia, Europe, and the US.