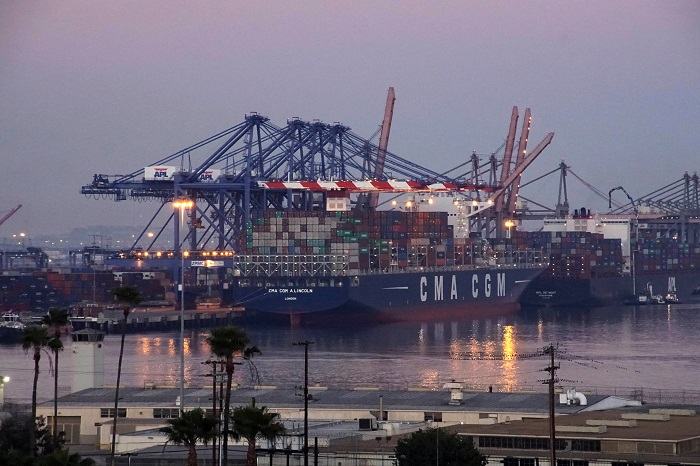 The fact that ocean carriers have been able to achieve modest profits since late 2017 could embolden them to seek increases in their service contract rates compared with last year’s low rates. (Above: the Port of Los Angeles.) Photo credit: Shutterstock.

US importers are entering Lunar New Year paying some of the lowest spot rates of the past six years in the eastbound Pacific at a time in which they historically had to pay a premium to get goods before Asian factories close.

The average range of what the spot rates have been during Lunar New Year compared with six weeks prior has been 15 percent to as much as 30 percent higher, according to Drewry Maritime Research’s analysis of the World Container Index. This year the West Coast rate one week before the start of the new year was only 1.4 percent higher than six weeks ago, and the East Coast rate was 14.4 percent higher, according to a JOC.com analysis of Shanghai Shipping Exchange spot rate data.

“BCOs [beneficial cargo owners] and [NVOCCs, non-vessel operating common carriers] have grown used to rates at or below steamship costs and could face tougher negotiations in the spring should the carriers maintain their disciplined appetite for new capacity,” Baltimore customs broker Samuel Shapiro & Co. stated Monday in a customer advisory.

With industry analysts projecting growth in vessel capacity of about 5 percent in 2018, to be matched by 5 percent growth in imports from Asia, carriers appear poised to seek compensatory rates from their steady BCO and NVOCC customers in the 2018 service contract negotiations that will begin soon.

Spot rate spikes during the peak shipping season in the autumn and the weeks leading up to Chinese New Year generally are higher than the rates that steady customers pay all year long in their annual service contracts. Although strong spot rates during the peak periods do not guarantee increased service contract rates the following year, they usually give carriers some leverage in their contract negotiations each spring.

Individual carriers in recent weeks have announced modest profits in 2017. The Japanese lines NYK, “K” Line, and MOL are preparing to merge into the Ocean Network Express company this spring after announcing 2017 profits, and Maersk, the largest global carrier, announced 2017 profits of $541 million. The liner industry as a whole is projected to have earned operating profits of about $1.5 billion in global operations, according to Drewry Shipping Consultants.

However, the current state of spot rates in the Asia-US trade as the annual Lunar New Year celebrations kick off on Friday seem to contradict these somewhat rosy financial announcements. Many factories in Asia close for a week or two each year for Lunar New Year, prompting BCOs to rush their shipments into the United States and giving carriers leverage to raise the spot rates each week as the holiday approaches.

These spot rate levels are even more perplexing when the shipping industry’s profitability is concerned. The liner industry as a whole reported losses every year from 2011 through 2016 despite relatively high spot rates in the pre-Lunar New Year periods. Last year’s especially strong pre-Lunar New Year spot rates pulled the carriers into profitability despite low service contract rates for the period beginning May 1, 2017.

A healthy string of spot rate increases leading up to Lunar New Year, which falls in late January or in February, normally gives carriers leverage in their service contract negotiations that begin in March. Even though spot rates the past several weeks have been lackluster compared with previous years, carriers have apparently achieved better control of their operating costs.

This could be due to the introduction of large vessels of 10,000 to 14,000 TEU capacity into East and West Coast services the past two years. The large vessels reduce per-container costs by up to $600 per slot, according to David Arsenault, former president of the Americas at Hyundai Merchant marine, who is now chief strategy officer at Direct ChassisLink, Inc.

One factor that is almost certain is that spot rates in the eastbound Pacific will drop, possibly sharply, during the Lunar New Year week when Asian factories are closed, and in the weeks immediately after that as the factories take some time to ramp back up to full production. The spot rates numbers for the years 2012 to 2017 show that the spot rates six weeks after Lunar New Year were generally 5 percent to more than 20 percent lower than the week before Lunar New Year.