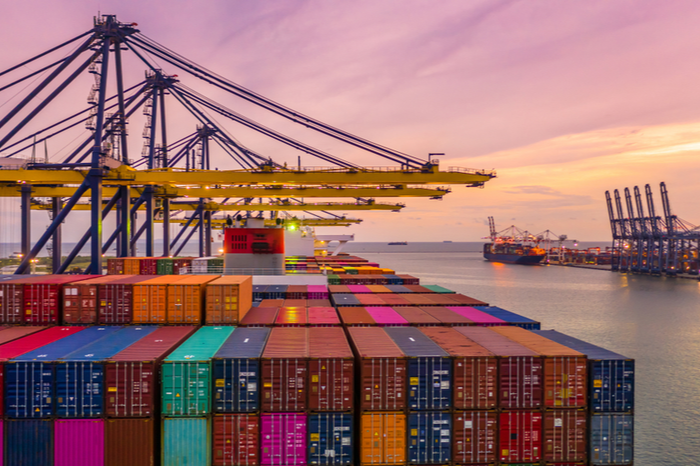 US and European imports are growing and keeping pressure on container equipment in Asia that is struggling to return to balance after COVID-19's impact on cargo flows. Photo credit: Shutterstock.com.

Shanghai, Singapore, and Port Kelang are among the Asian hubs facing a growing shortage of container equipment amid strong peak season demand, according to box availability data from online platform Container xChange.

Shanghai has limited supply of TEU, while in Singapore, both TEU and FEU are in short supply, data from the platform’s Container Availability Index (CAx) shows. Port Kelang in Malaysia is also showing a shortage of 20-foot container equipment.

“The lower availability of containers across Asia has caused concern in the industry with the upcoming peak season that is expected, meaning an increased need for containers in Asia to be able to keep up with an increasing demand for cargo and goods shipped from the region,” Container xChange noted in a blog posted Monday.

JOC.com highlighted worsening container shortages in Asia earlier this month as importers in the United States and Europe struggled to return empty containers to China and other Asian manufacturing hubs. The container imbalance was caused primarily by the spike in imports to the US and Europe in July and August following the reopening of their economies after lockdowns put in place in the early days of the coronavirus disease 2019 (COVID-19).

Container xChange expects the equipment shortage to tighten further as shippers race to get their cargo on the water before the Golden Week holidays close China’s factories from Oct. 1-7.

A recent update by US-based Worldwide Logistics Shanghai, and shared by Jon Monroe Consulting, noted the container shortage was more widespread, affecting most carriers calling in Shanghai, Shenzhen, Ningbo, Dalian, Tianjin, Qingdao, Xiamen, and Fuzhou. Apart from Cosco Shipping, most of the carriers were experiencing shortages in finding equipment, the logistics provider said in the Sept. 9 update.

While in early September containers of all sizes were in short supply — 20-foot, 40-foot, and 40-foot high-cube — Container xChange said its data indicated the shortages now appeared to be more acute among 20-foot boxes, with 40-foot high-cubes increasing in availability at port hubs such as Shanghai and Port Kelang.

The surge in Asia exports was also highlighted by Olivier Ghesquiere, president and CEO of container leasing company Textainer Group, who said in a mid-August earnings call that the significant uptake in demand for containers has extended through the third quarter.

“The existing container inventory at [Chinese] factories held by lessors, which should be at a level of about 600,000 TEU, has by now been almost entirely committed,” he told investors in the Aug. 13 call.

“This change in market dynamics is driven by the cyclical increase in trade over the summer season in North America and Europe, and is compounded by the restocking of inventories following the easing of quarantine measures in most developed economies,” Ghesquiere added. “COVID-19-related disruptions to supply chains have also caused a dislocation of containers for shipping lines. The impact of these factors has been amplified by the fact that for most of the past six quarters, shipping lines remained focused on cost optimization, thereby limiting their container fleet sizes.”

US imports grew strongly in August. Containerized imports from Asia increased 13.4 percent from August 2019, and imports from mainland China were up 16.5 percent, according to PIERS, a JOC.com sister company within IHS Markit.

“Carriers have cut per diem times to turn boxes quicker to get them back to Asia to be loaded with the now priceless eastbound cargo,” Monroe said in his latest weekly import update. “Get it while you can seems to be the carriers’ new mantra of the day.”

Asia-US West Coast rates last week hit a new record of $3,813 per FEU, a 163.5 percent increase on the same week last year, according to the Shanghai Containerized Freight Index (SCFI). Asia-US East Coast rates were up 8 percent year over year to $4,534/FEU. The weekly rate movements are tracked at the JOC Shipping & Logistics Pricing Hub.

In Europe, the latest volume data available is for July, when Container Trades Statistics (CTS) reported a 1.9 percent increase in volume on Asia-Europe compared with the same month last year, with 1.52 million TEU being moved on the headhaul routes.

Rising rate levels on Asia-Europe support forwarder reports that volume remains strong on the trade. SCFI average spot rate levels from Shanghai to North Europe last week stood at $1,054 per TEU, 56 percent above where they were at this time last year.

Dominique von Orelli, executive vice president, global head of ocean freight at DHL Global Forwarding, told a JOC Container Shipping Outlook webinar last week that container equipment was currently deployed on the highest yielding trades, the trans-Pacific and Asia-Latin America. “So is there going to be enough equipment for the Asia-Europe trade?” he asked.

However, Andreas Bütfering, senior director trade management/Far East at Hapag-Lloyd, said he was not seeing a shortage in container equipment on the Asia-Europe trade at the moment.

“The extra capacity deployed in August is returning from Asia, so the trade should be much more balanced now,” he told the webinar. “I do not think we will have massive overstock in Asia, but I expect the pressure on equipment availability will come down.”

Global Shipping Outlook: A Sneak Peek at 2021
Port Performance North America: Managing Cargo Flow During a Pandemic — and Beyond
END_OF_DOCUMENT_TOKEN_TO_BE_REPLACED