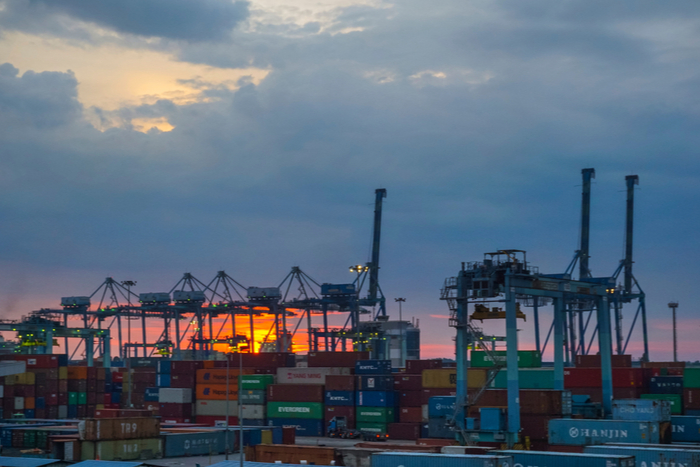 Cargo rollovers at Asia’s main hub ports rose sharply through December, as rising container demand from the US and Europe overwhelmed terminals and carrier capacity, despite the deployment of all available vessels and extra loaders on both trades.

The latest sequential container tracking data for December from supply chain visibility provider Ocean Insights show the world’s busiest port of Shanghai rolling 37 percent of all containers, an increase of 7 percent over the previous month. The rollover ratio at Port Klang was up 9 percent to 55 percent of all containers that were handled by the Malaysian hub, while Singapore rolled 2 percent more boxes in December than during the previous month at 42 percent.

The data provider said rather than the traditional seasonal decline in cargo flows, there were growing levels of demand at a time of usually lower volumes, and the sustained demand was creating rising delays and increasing container rollovers. Ocean Insights calculates the rollover ratio for carriers as the percentage of cargo carried by each line globally that left a port on a different vessel than originally scheduled.

“Of the 20 global ports for which Ocean Insights collates data, 75 percent saw an increase in the levels of rollover cargo in December compared to the previous month,” Josh Brazil, chief operations officer at Ocean Insights, said in a statement Tuesday.

A market out of balance

The strength of the recovering demand from the US and Europe following second-quarter 2020 economic lockdowns surprised the container shipping market. Carriers reinstated all available capacity to cope with the rising volume through a peak season that began in July and August on the trans-Pacific and Asia-Europe trades and has continued into 2021.

Several carriers also deployed extra loaders or sweeper vessels to cope with the rising demand, but it was not enough to reduce rollover ratios. “This indicates that the levels of cargo are still rising while the extra loader capacity, which has been deployed to meet the raised levels of demand, appears to be having little effect,” said Brazil.

The carriers saw their overall increase in rollover values rising from 35 percent in November to 37 percent in December, with five carriers leaving more than 40 percent of their containers at the departure port.

In December, CMA CGM had the worst rollover rate of transshipment cargo at 51 percent, up from 48 percent in November. Ocean Network Express (ONE) was next at 50 percent of all cargo rolled (45 percent in November), followed by Hapag-Lloyd at 46 percent (42 percent), Evergreen at 44 percent (37 percent), and Cosco Shipping at 43 percent (37 percent). The cargo rollovers at Maersk and Mediterranean Shipping Co. in December remained unchanged from November levels at 30 percent.

Brazil said industry experts believed the cargo surge could last deep into 2021, with a “strong likelihood” the prevailing conditions will continue throughout the first half of the year.