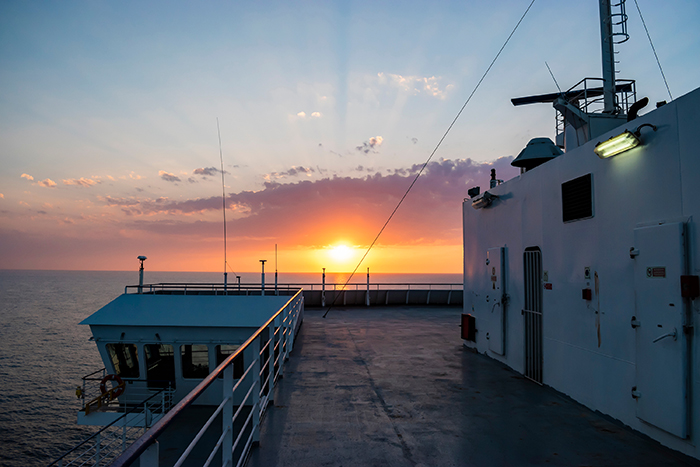 The Getting to Zero Coalition has set a goal of developing and deploying a commercially viable zero-emissions cargo vessel by 2030. Photo credit: Aldo91/Shutterstock.com.

Members of the maritime, energy, infrastructure, and financial sectors have formed a new coalition that aims to lead commercial efforts to decarbonize international shipping and have set a goal of deploying a zero-carbon vessel by 2030.

Supported by more than 70 public and private organizations, the Getting to Zero Coalition has committed to the development of commercially viable zero-emission cargo ships in order to meet the goals set out in the International Maritime Organization’s (IMO's) initial strategy on greenhouse gas (GHG) emissions reduction. The announcement coincides with the leaders of 14 countries — Australia, Canada, Chile, Fiji, Ghana, Indonesia, Jamaica, Japan, Kenya, Mexico, Namibia, Norway, Palau, and Portugal — calling for ocean-based climate action, including decarbonizing ocean industries. The group of countries represent 30 percent of global coastlines and one-fifth of the world's shipping fleet.

Released in 2018, the IMO strategy calls for a minimum 50 percent reduction in global GHG emissions from the container shipping industry from 2008 levels by 2050. Equally importantly, the IMO requires finalized short-term measures by 2023 and mid-term measures to achieve a carbon dioxide (CO2) emission decline of 40 percent by 2030 and encourages efforts to phase out GHG emissions completely. Ocean freight currently accounts for 2.4 percent of global GHG emissions, and those emissions are projected to grow between 50 and 250 percent by 2050 if no action is taken, according to industry estimates.

To reach the reduction goals, the Getting to Zero Coalition has set a target of 2030 for the deployment of commercial vessels that run on zero-emission fuels.

“Achieving the 2050 target requires immediate action,” the coalition said in an “ambition statement” released Monday at the UN Climate Summit in New York. “Ships can be operated for 20 years or more, which means that the ships entering the world fleet around 2030 can be expected to be operational in 2050.

“Similarly, infrastructure associated with fuel supply chains can have a long economic life of up to 50 years, and reconfiguration to new fuels can be a lengthy process. As a consequence, there is a need to have technically feasible, commercially viable, and safe zero-emission deep sea vessels entering the global fleet by 2030, as well as a clear path to provide the large amounts of zero-carbon energy sources needed to allow the rapid uptake of ZEVs [zero-emission vessels] in the following decades.”

Industry experts tell JOC.com alternative fuels such as biofuels, liquefied natural gas (LNG), and hydrogen could play a major role in the decarbonization of international shipping, but there is insufficient research, development, infrastructure, and availability — as well as high production costs and issues with compatibility with “legacy” ships — to employ low-carbon fuels in the short term.

All-electric, hybrid, and renewable energy-powered ship designs may be the key to achieving a carbon-neutral shipping sector in the long term, but there are significant impediments to adoption, namely the industry’s global fleet of over 50,000 vessels that cannot simply be replaced or retrofitted overnight.

“The challenge for a ship built today is that this change will take place within its lifespan,” a spokesperson for DNV GL, a provider of risk management and quality assurance services to the maritime industry, told JOC.com in a July interview. “Failure to account for foreseeable regulatory and technology developments may render a ship built today uncompetitive at best; in the worst case it may end up being prohibited from operating altogether.”

In addition to reducing emissions in international shipping, the group hopes that the creation of industry-scale demand for alternative fuels will serve as a “catalyst” for a broader transition to clean energy. “This can increase confidence among [fuel] suppliers and translate into an increased supply of feasible zero-emission fuels and thus be an important point of leverage for change across other hard-to-abate sectors,” the coalition said.

Søren Skou, CEO of A.P. Møller Mærsk, said in the coalition’s statement that efforts to improve operational efficiency have resulted in a 41 percent reduction in Maersk’s CO2 emissions in the last ten years, but “efficiency measures can only keep shipping emissions stable, not eliminate them. To take the next big step change towards decarbonization of shipping, a shift in propulsion technologies or a shift to clean fuels is required, which implies close collaboration from all parties.”

“Getting to zero is about more than the delivery of zero-emissions vessels into the world fleet by 2030,” added Alastair Marsh, CEO of Lloyd’s Register. “As an industry, we need to ensure that the infrastructure and supply chain is in place to support this change.”

The 2030 deadline for deploying zero-carbon vessels has been on the industry's radar for the past year, after Maersk announced in late 2018 that it would deploy a fully decarbonized fleet by 2050. “Due to the 20-25-year lifetime of a vessel, Maersk must have carbon neutral vessels commercially viable by 2030 to realize the 2050 target,” said an article published in June on the Maersk website. At the same time, Maersk said that it could not achieve the 2030 goal without a broader industry effort.

There are nuclear powered ice

Permalink Submitted by mark.bennett@su... on Sep 24, 2019 5:13AM EDT
There are nuclear powered ice-breakers, submarines and aircraft carriers. One way to get zero carbon emissions from large container vessels would be to use nuclear power... for all vessels above a certain size. Contraversial maybe but then the challenges to reduce carbon emissions from ocean transport are significant.

Good article JOC.COM, but I

Permalink Submitted by Louis.Notley@Ne... on Sep 30, 2019 3:17AM EDT
Good article JOC.COM, but I really don't like the graphic: it's misleading. Its headline 'Sailing towards zero-emission container shipping' suggests that the industry is on track to achieve zero carbon, while the graphics show a shipping industry emitting zero smoke by that date, not a 50% cut. Really, it should have a smoke cloud half the size of the first one on the left. This may seem trivial, but it's exactly this kind of smoke and mirrors which gives the public the impression that the shipping industry is not trying hard enough.
Maritime News
Maritime News›Container Lines
Maritime News›Container Lines›Maersk Line
Maritime News›International Freight Shipping›A.P. Moller-Maersk Group
Regulation & Policy›Transportation Regulations›International Transportation Regulations