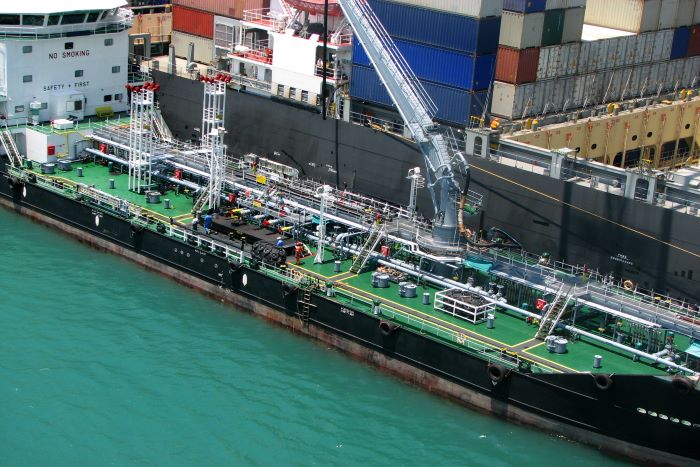 The price of very low-sulfur fuel oil in Houston was assessed at $437.50 per metric ton on Mar. 2; by the end of the month, it had cratered to just barely over $200/mt. Photo credit: Shutterstock.com.

The coronavirus disease 2019 (COVID-19) has managed to fully erase one of the primary concerns of IMO 2020 — the availability of compliant low-sulfur fuels — but not necessarily because of any significant drop, real or perceived, in marine bunker demand, analysts said.

With the world’s air and surface transportation coming to a near halt in mid-March and only now taking some tentative steps toward recovery, the global oil refinery complex has been awash in low-sulfur feedstocks used in the production of gasoline and so-called middle distillates — diesel and jet fuel. With nowhere to go, those feedstocks have flooded the bunker market as a last resort, raising the possibility the container shipping sector will enjoy relatively cheap low-sulfur fuel for at least the next year.

“There’s a lot of oil. There are refiners with a lot of oil,” said Tom Sosnowski, managing editor for Americas marine fuels at the Oil Price Information Service (OPIS), a sister company to JOC.com within IHS Markit. “Oil needs to be disposed of, and the bunker market is a great place for it right now.”

Sosnowski, speaking on an OPIS-sponsored webinar last week, said the need to move excess oil via bunker sales has resulted in some desperate suppliers resurfacing in regional markets after being absent for years. That is particularly true along the US Gulf Coast, he noted, where an excess supply of very low-sulfur fuel oil (VLSFO) has resulted in a sharp decline in prices since early March. The fact that bunkers are a ‘retail’ market where sellers need to compete heavily to move product amid falling demand has only exacerbated the price drop.

Bunker prices globally began to slide within weeks of the Jan. 1 IMO 2020 mandate, once early logistical woes and supply issues were sorted. The declines accelerated in early March after OPEC and Russia initially failed to reach a deal to curb crude production, and then went into freefall as crude prices plummeted when energy demand vanished amid the global COVID-19 lockdown.

The plunge in low-sulfur prices has focused attention on whether the bunker adjustment factor mechanism can still truly capture abrupt changes in fuel costs or just causes confusion for shippers. CMA CGM and Maersk Line are the only carriers to suspend low-sulfur fuel surcharges, with most liners deciding to leave the fees in place despite the freefall in bunker prices.

Under the IMO’s new low-sulfur rules, ships must burn fuel with a sulfur content of not more than 0.5 percent, down from the prior cap of 3.5 percent. Vessels can still burn cheaper high-sulfur fuel oil (HSFO) if they install costly emissions-cleaning scrubbers.

IHS Markit noted that COVID-19’s impact on marine fuels has manifested itself more on the supply side than on demand. Indeed, while the early worries of finding enough compliant low-sulfur fuels in the wake of IMO 2020 have disappeared, marine fuel consumption globally is down only about 5 percent since early March, according to IHS Markit. That decline has been driven mainly by scores of blanking sailings in the container shipping sector and what Rob Smith, director of global fuel retail at IHS Markit, referred to as a “decimated” cruise ship industry.

The global fleet typically consumes about 3.2 million barrels per day of bunker fuels, according to IHS Markit. Demand in the container shipping sector specifically is down about 10 percent so far this year, it said.

“Obviously, the ‘big story’ of 2020 is no longer a bunker fuel specification change,” Smith said in a research note. “Coronavirus' impact on bunker fuel demand has been limited compared with the toll it has taken on road and aviation fuels.”

Smith said VLSFO currently accounts for “well over” 60 percent of current bunker demand, with low-sulfur marine gasoil, another IMO-compliant fuel, at 20 percent, and HSFO at 15 percent for ships using scrubbers.

The rush to install scrubbers, meanwhile, has eased amid the collapse in the closely watched spread between VLSFO and HSFO. With plentiful — and relatively cheap — VLSFO available, the economic incentive for shipowners to spend millions on an exhaust-cleaning system in order to continue burning high-sulfur bunkers has been dampened significantly.

“I know there are a number of shipping companies that have delayed their [scrubber] plans,” OPIS’ Sosnowski said. “They haven't scrapped the plans, but there’s no rush [now]...I think scrubbers are still viable going forward, but it’s a challenging picture for them right now.”

The VLSFO-HSFO spread in Houston — almost $300 in early January — was $54 on Friday, according to OPIS data. “For all the scrubber people out there, that’s bad news,” Sosnowski said. “That lengthens the payback time.”

Hedi Grati, director of refining and marketing at IHS Markit, said the collapse in the spread has forced the company to revise its forecast for global scrubber installations. Whereas IHS Markit had expected a total of 3,900 vessels to be fitted with scrubbers by the end of this year — almost double the 2,000 at the start of 2020 — it now sees that number at 3,300 to 3,400.

Grati called the figure a “rough estimate” that is highly dependent on how long the COVID-19 crisis lasts.

Alphaliner, in its newsletter for the week ended May 12, said scrubber installations accounted for 716,000 TEU, or 30 percent, of the total inactive fleet as of Apr. 29. That is down from 68 percent of the inactive fleet at the end of December, it noted, when the rush to install scrubbers was fully on.

As bleak as the scrubber picture looks now, it will improve, according to experts, because the VLSFO-HSFO spread will begin to expand when oil prices and demand eventually recover once the worst of the coronavirus hit passes.

“I don’t think the business case is dead,” said Jan Christensen, senior director of purchasing and supply at Hapag-Lloyd. Christensen told a late-April webinar hosted by maritime consultancy BLUE Insight he believes the pay-back time for scrubber installations has been extended from one to two years to a “handful” of years owing to the spread collapse. “In my opinion, [the business case is] not entirely dead, let me put it that way,” he said.

Adrian Tolson, a bunker industry veteran and director at BLUE Insight, agreed the case for scrubbers will again make sense, particularly for the container shipping sector. “The spread will widen out as prices recover, and they will recover at some point,” Tolson said. “The [scrubber] model works to a certain degree if you've got the right model of shipping, as Hapag-Lloyd certainly does.”

Just when that recovery really begins — and sustains — is unknown. IHS Markit’s Smith said the current dynamic between COVID-19 and the global bunker fuel market will be in place for a minimum of another 12 months.

He said, “...the narrower VLSFO-HSFO differential, and overall lack of a supply crunch for low-sulfur bunker fuel, is not likely to change anytime soon. Refinery throughput and global demand will be negatively affected by COVID-19 for at least another year, effectively giving the refining and shipping industries time to ‘ease into’ the new (IMO 2020) specification.”