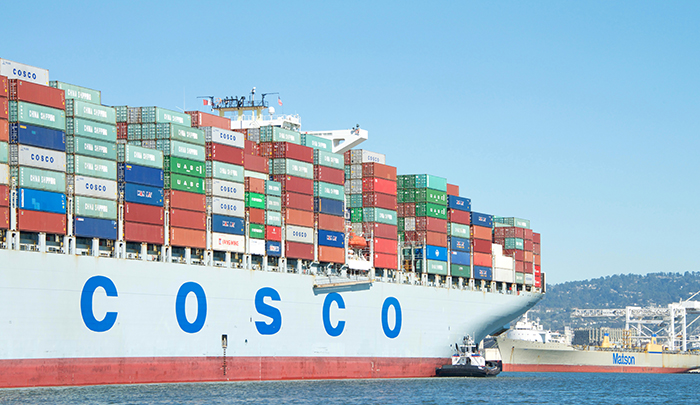 Trading in Cosco Shipping Holdings Stock had been suspended for nearly three months.

Cosco Shipping Holdings began trading on the Shanghai Stock Exchange today after being suspended for an eventful 10 weeks that resulted in the carrier’s $6.3 billion takeover offer for Orient Overseas (International) Limited (OOIL), the parent of Orient Overseas Container Line (OOCL).

Trading in Cosco Shipping shares was halted on May 17 for what the carrier said was “material asset restructuring”, reigniting speculation that China’s largest shipping line was preparing to make a bid for OOIL. After months of firm denials by OOIL that it was for sale, the Hong Kong-based carrier announced on July 9 that it had accepted the enormous offer from Cosco Shipping and Shanghai International Port Group.

However, following the takeover bid, Cosco Shipping was asked on July 18 to provide clarification on several issues by the Shanghai Stock Exchange, with trading resuming once the information was made available to the exchange.

Some of the issues Cosco was asked to elaborate on were highlighted by container shipping analyst Alphaliner. They included whether there was a possibility that the deal might not pass the anti-monopoly review, and what the impact and risk of that would be.

In its revised summary of the acquisition report submitted to the Hong Kong and Shanghai stock exchanges on July 25, Cosco said the transaction was subject to regulatory review in the US and EU. While the carrier said it remained positive, it acknowledged there was a “certain degree of uncertainty” for Cosco to pass the review.

The combined Cosco-OOCL carrier will be the largest line on the Asia-North America route, but the market remains highly competitive. No individual carrier on the trade will command more than 20 percent of overall market volumes.

The Shanghai exchange also asked for information on how Cosco and SIPG planned to keep the OOIL listing on the Hong Kong Exchange with less than 25 percent public ownership planned to be retained, as the lowered stake would not meet the HKSE’s listing criteria.

Competition regulators around the world have been kept busy over the last 18 months as a wave of mergers and acquisitions has rolled over the container shipping industry, the result of carriers’ drive for scale to lower unit costs amid intense competition between the alliances — 2M-plus HMM, (Maersk, MSC, and Hyundai Merchant Marine); Ocean (CMA CGM, Evergreen, OOCL, and Cosco); and THE (Yang Ming, MOL, NYK, “K” Line, and Hapag-Lloyd).

This has placed the smaller carriers under pressure, with transport analysts convinced that to survive in such a size-dominated market, PIL, Yang Ming, and Zim Integrated Shipping Services will have to be acquired by a larger rival at some point.