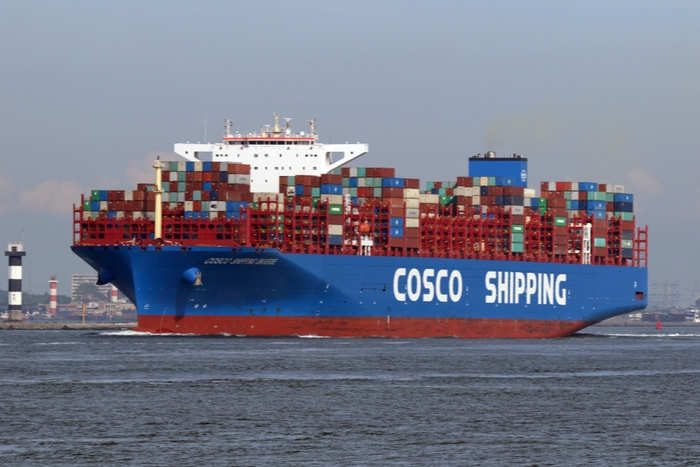 It was a relatively good start to the year for Cosco Shipping, with tight capacity management fending off the impact of a worsening business environment. Photo credit: Shutterstock.com.

Cosco Shipping was able to maintain pricing power in the first quarter even as container volumes began dropping due to the fallout from the coronavirus disease 2019 (COVID-19). As one of the first carriers to declare first quarter results, the Cosco report bodes well for the wider liner industry's ability to weather COVID-19 by quickly adjusting supply to demand.

Group revenue of $5.1 billion was up almost 3 percent in the first quarter year over year, with revenue per TEU across all trades improving by $43 to $949 per TEU, Cosco Shipping Holdings said. But overall volume fell across the group’s container shipping business, with the 5.6 million TEU handled in the first quarter representing a decrease of 4.67 percent year over year.

Cosco Shipping reported revenue of $3.1 billion in the first quarter, up 1.1 percent. Volume fell 6.2 percent to 4 million TEU, with much of the loss incurred on domestic China routes that were down 16 percent as the country shut down to limit the spread of the coronavirus. The carrier grew its intra-Asia volume to 1.14 million TEU in the first quarter, up almost 2 percent year over year, and improved its revenue 17 percent to $817 million.

Lars Jensen, CEO of Sea-Intelligence Maritime Consulting, said the decline in the overall volume of the group was to be expected given the coronavirus pandemic, but he said what stood out in the Cosco Shipping result was the development in unit revenue by the carrier.

“Using the US dollar revenue data, only the trans-Pacific saw rates decline and that was by just 0.7 percent,” Jensen said. “Other trades saw rate increases. Despite the large drop in intra-China volume, rates here also increased 7.6 percent.”

The overall increase in Cosco Shipping’s unit revenue of 7.9 percent in the first quarter reaffirmed a trend Jensen said could be seen with OOCL and Ocean Network Express (ONE).

“Despite the negative volume impact from the virus outbreak in China, and the early effects of the pandemic in end-March, carriers have managed to maintain a strong grip on the freight rates through their swift action in cutting capacity,” he said.

Data from Sea-Intelligence shows that more than 400 sailings have been blanked on deep-sea trades. On the Asia-Europe and trans-Pacific trades alone, the amount of weekly capacity removed in the past week increased from 3.1 million TEU to 3.4 million TEU. The analyst estimates that the total lost volume in 2020 could reach 7 million TEU.

Hong Kong-based Cosco Shipping subsidiary OOCL reported a strong operating performance in the first quarter, increasing total revenue 5.5 percent to $1.54 billion, with volume marginally up 0.4 percent to 1.59 million. The carrier’s average revenue per TEU was $963, an increase of 6 percent.

Alphaliner noted that OOCL’s average rates on the Asia-Europe and intra-Asia routes were particularly strong, although this was tempered by lower rates on trans-Pacific and trans-Atlantic routes. The analyst said average rates were already starting to come under pressure as volume has been negatively affected by the coronavirus lockdowns across all key markets that will hit second quarter earnings.