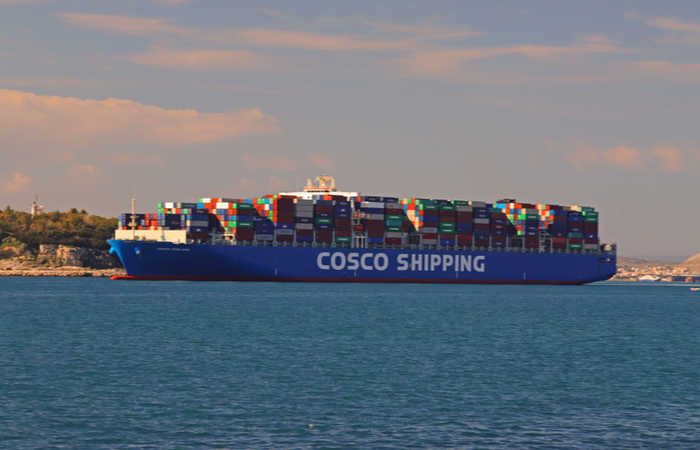 In response to shifting cargo flows in Asia being driven by the United States-China trade war, Cosco Shipping Holdings has altered its network to capitalize on increased sourcing from Southeast Asia, helping it report a $161 million profit.

The China state-owned company, parent of Cosco Shipping Lines and OOCL, posted a much-improved operating profit of $499 million in the first half against year-over-year earnings before interest and taxes (EBIT) of $80 million.

To capture the shifting cargo flows in Asia being driven by the US-China trade war, the sister carriers introduced new intra-Asia services and expanded capacity on routes from Southeast Asia to North America. In the first half, the carriers’ non-China volume of US shipments increased by 7.8 percent, according to the group’s interim results statement.

Trans-Pacific data shows how the trade flows are being influenced by the US-led trade war. According to data from PIERS, a JOC sister company within IHS Markit, US imports from China declined 5 percent in the first six months of the year against the same period in 2018, while imports from Vietnam were up 30.5 percent. US imports from Southeast Asia reached 1.6 million TEU in the January-June period, up almost 300,000 TEU, or 23.1 percent, over the first half of 2018.

China is by far the US’ largest trading partner — 5.1 million TEU crossed the Pacific eastward in the first half of the year. Vietnam, long a favored alternative to manufacturing in China, exported 705,246 TEU to the US in the period.

Other Southeast Asia nations have also experienced robust growth in the first half compared with the same period in 2018. US imports from Thailand rose 19.6 percent, Malaysia 22 percent, Indonesia 11.5 percent, and Cambodia 38.8 percent.

The world’s major carriers are increasingly deploying larger vessels to take advantage of economies of scale, but these ships cannot typically call at ports in Southeast Asia outside of the major hubs. That means any increase in volume from countries outside China will need to be served by feeder vessels transferring the containers to hubs such as Singapore or Hong Kong.

Sea-Intelligence Maritime Consulting found that compared with the 2018 peak season, the 2019 peak season has seen an increase from 14 to 18 weekly Southeast Asia-based trans-Pacific services.

“We also found that the number of Southeast Asia port calls on trans-Pacific services per week increased substantially, from 33 per week in the 2018 peak season to 38 in the 2019 peak season,” said Alan Murphy, Sea-Intelligence CEO.

Cosco Shipping and OOCL have adjusted their networks to support the sourcing shift. In the first half, the carriers raised the total number of intra-Asia service routes to 42, Cosco Shipping said in its earnings statement. Although the carrier did not give an indication of how many new services were added, it said they were increased to capture the growth of container transport demand in Southeast Asia and improve feeder networks to support vessels on the mainline routes.

Cosco Shipping’s outlook suggests a second half for 2019 that will match the positive first six months. The carrier said it was expecting supply-side pressure ease in the second half with few new vessel deliveries, increased scrapping, and dry docking of ships for scrubber installation ahead of the low-sulfur regulations. The state-owned carrier believes this will keep rates at a “reasonable” level for the rest of the year.

OOCL’s Hong Kong-listed parent OOIL, acquired by Cosco Shipping Holdings in June 2018, also had its first result lifted by improved rate levels. On Aug. 26, the carrier reported a $139 million profit in the first half of the year, with slowing volume offset by the rate improvement.

Since the OOCL acquisition, Cosco Shipping Holdings has deployed what it calls a dual brand strategy, optimizing the route networks of both carriers and improving efficiency, centralizing procurement, and leveraging IT capabilities. It has been reported that Yang Zhijian, the general manager of Cosco Shipping’s dry bulk business, will soon join OOIL chief executive Andy Tung as joint CEO of the Hong Kong-based carrier.

But it is in end-to-end logistics, and especially the landside segment of this business, where Cosco Shipping Holdings is making big moves. By the end of the first half, the company said it was operating 123 railway routes for foreign trade and 167 railway routes for domestic trade. In the first half, Cosco Shipping said it had moved a total of 16,000 TEU on its China-Europe rail network, 10 times that of the same period in 2018.

The group is also building its rail-ocean product via the Greek port of Piraeus in which Cosco Shipping owns 51 percent. In the first half, the shipping group added 20 new China-Europe railway-container line service routes to the five that were already in operation.