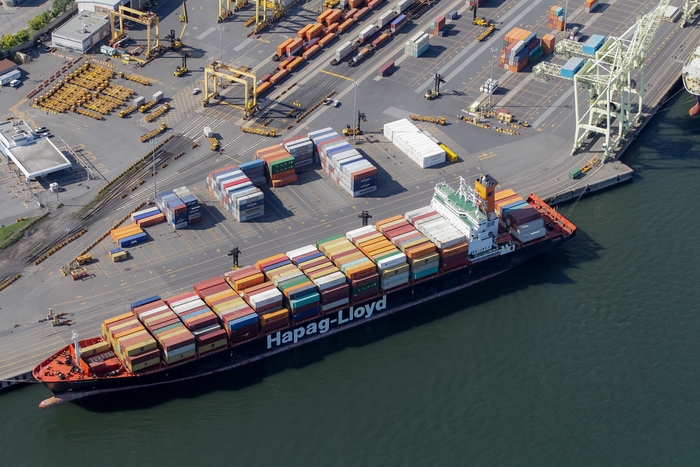 Uncertainty over demand recovery as the US and Europe head into recession is causing carriers to revise their expectations for the year. Photo credit: Shutterstock.com.

The first signs of the damaging effect of the coronavirus disease 2019 (COVID-19) on container shipping earnings has emerged. A.P. Møller-Maersk has suspended its financial guidance for 2020, Hapag-Lloyd is expecting a negative impact on earnings for at least the first half of the year, and OOCL has warned of a possible medium- to long-term decline in demand.

The pessimistic carrier predictions reflect concerns that even as China begins to recover from the impact of the coronavirus on demand and factories edge closer to full production, the US and European economies are falling into recession. As IHS Markit chief economist Nariman Behravesh put it Thursday during the JOC webcast, TPM20: What We Missed — The Economic, Trade and Container Shipping Outlook, “The virus itself isn’t killing the economy, but the response to it is sending us into recession.”

It is a frustrating situation for the carriers. Maersk and Hapag-Lloyd reported a strong start to the year despite increased operating costs tied to the IMO 2020 low-sulfur fuel mandate that went into force in January.

But Maersk told investors Friday the coronavirus has severely impacted global transport markets and supply chains, leading to a decision to suspend the carrier’s $5.5 billion guidance on earnings before interest, taxes, depreciation, and amortization (EBITDA) for 2020.

“Because of the current situation with high uncertainties related to global container demand due to the coronavirus pandemic and the measures being taken by governments to contain the outbreak, we have chosen to suspend our 2020 full year guidance on earnings, but will as soon as we have more clarity return with an outlook for 2020,” Søren Skou, CEO of A.P. Møller-Maersk, said in a statement.

Hapag-Lloyd also highlighted “considerably higher uncertainties than normal” affecting its 2020 forecast as the carrier released its annual report in Hamburg Friday. Hapag-Lloyd improved its profitability last year despite a difficult fourth quarter, with average freight rates up 2.7 percent year over year, and volume rising 1.4 percent to 12 million TEU. Revenue rose 9 percent to $13 billion, the operating result improved 48 percent to $775 million, and the carrier reported net profit of $400 million compared with a $50 million profit in 2018.

But the look ahead was likely to be far less positive. CEO Rolf Habben Jansen said 2020 would be “a very unusual year,” with the coronavirus outbreak changing market conditions rapidly over the past few weeks.

“After the initial shock, markets in China and other Asian countries have started to recover, probably faster than many feared. But now also the other continents are impacted, and the effects of that will be significant,” Habben Jansen warned in a statement. “The extent of the coronavirus outbreak cannot be accurately predicted, but Hapag-Lloyd expects that it will have an impact on the development of earnings at least in the first half of 2020.”

According to the annual report, the majority of the earnings are expected to be generated in the second half, and particularly in the third quarter during the peak season. For 2020, Hapag-Lloyd has predicted an EBITDA of $1.8 to $2.4 billion and an EBIT of $540 million to $1.1 billion, but said the forecast remained uncertain because of the coronavirus.

“We will in the upcoming weeks and months mainly focus on the three things that matter most to us: the safety and health of our people, keeping the supply chains of our customers flowing, and taking precautionary financial measures to weather the storm if it lasts longer than anticipated,” said Habben Jansen.

While Maersk and Hapag-Lloyd are among the more consistently profitable container shipping companies, a comparison of the stock price of the two carriers shows the Hapag-Lloyd shares have held up better than those of Maersk over the past month. Hapag-Lloyd shares lost almost 11 percent of their value since Feb. 20 while Maersk stock was down 35 percent over the same period. This suggests investors believe Hapag-Lloyd is in a better position to ride out the coronavirus crisis, at least in the short term.

OOCL was also looking forward to a positive start to 2020 before the coronavirus outbreak clouded the outlook. In its annual report released Friday, the carrier said the signing of the first-phase trade agreement between China and the United States in 2019 removed some of the uncertainty prevalent in the trans-Pacific trade, and the narrowing of the gap between demand and supply in the container shipping market created “reasonably positive expectations” for the industry at the start of 2020.

The subsidiary of Cosco Shipping was hoping to build on a profitable 2019 when the carrier booked a net profit of $1.34 billion compared with the $108 million recorded in 2018, although if the profit from the disposal of the Long Beach Container Terminal in 2019 is removed, OOCL’s full-year profit was up 22 percent to $41 million.

“If the epidemic further escalates globally and lasts for a long time, the medium and long-term impact will be more extensive and significant, and the growth of the global economy and container shipping demand will decline,” OOCL noted in its outlook for 2020.

Both Maersk and Hapag-Lloyd reported getting the year off to a good start, with Maersk still expecting to end the first quarter with an improvement in earnings compared with the first three months of 2019.

Skou said during the first two-and-a-half months, Maersk had executed well its management of the additional costs associated with a switch from high to low-sulfur fuel in accordance with the IMO 2020 mandate.

“We have effectively mitigated a part of the extra cost through good procurement, blending and manufacturing fuel ourselves, and we have implemented rate increases to recover the actual fuel price increase from customers,” he said. “We consequently expect to deliver a Q1 2020 which is better than Q1 2019, despite declining volumes across our businesses, driven by the COVID-19 pandemic.”

Hapag-Lloyd said it had enjoyed a “decent start” to 2020, but did not give further details in its annual report that covered the 2019 business. However, the carrier said global container volumes will be impacted by the coronavirus crisis, but the magnitude of the impact was impossible to determine right now.

Factories in China, shut through February and into March in an attempt to limit the spread of the coronavirus, are gradually returning to full production. But as China and Asia get back to work, the epicenter of the disease has shifted to the US and Europe, with the effects on demand still to be felt.

Habben Jansen is clearly expecting container shipping demand to fall, and said in the annual report that Hapag-Lloyd anticipated having to further adjust capacity deployment in the coming months to cope with this decline.

Carriers were quick to remove capacity as the coronavirus took hold in China; so far, 77 sailings have been blanked as a result of the effect on demand, according to data from Sea-Intelligence Maritime Consulting. The analyst predicted the blank sailings would result in 1.9 million fewer TEU in total 2020 volume.