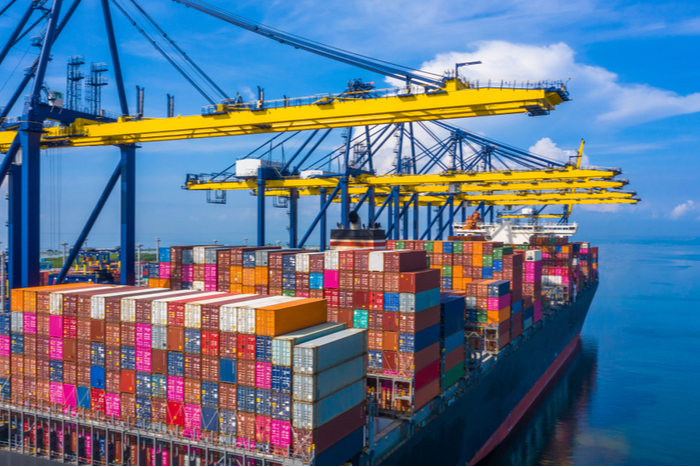 The newfound ability to rapidly match capacity with falling demand has allowed carriers to both increase and sustain rates at higher levels than last year. Photo credit: Shutterstock.com.

Spot rates have soared above year-over-year levels through the second quarter, despite the significant pandemic-related loss of volume, putting carriers on course for a $9 billion profit this year if those rates can be maintained.

But the ability of carriers to lose 15 to 20 percent of container volumes while at the same time increasing rates has surprised a sector more used to witnessing rate wars in times of market distress.

Tight industry-wide management of capacity has enabled carriers to not only prevent a rate slide, but to actually push rates higher — significantly, on some east-west trades. The Shanghai Containerized Freight Index (SCFI) shows Asia-US West Coast rates at $2,669 per FEU, up 93 percent year over year, while Asia-North Europe rates are 24 percent higher at $886 per TEU.

That strength even in the face of sharply declining volumes has led Alan Murphy, CEO of Sea-Intelligence Maritime Analysis, to radically revise his carrier profitability model made in April, in which the worst-case scenario had carriers heading for a $23 billion loss in 2020. The extent of April blank sailings, and their sustainability over the last few months, took everyone by surprise, noted Murphy, and materially changed the analyst’s outlook.

“If the carriers maintain the current rate levels, they stand to have a profit in excess of $9 billion in 2020,” Murphy said in a Sunday Spotlight statement. “If they start a freight rate war in the second half of 2020, they stand to lose $7 billion, but for now there is nothing indicating that we will see such a collapse — rather the opposite in fact. The severity of the negative scenario is so material that this is likely a key component in the carriers’ newfound ability to be very disciplined in their capacity management. Once again, it is likely that it is the positive scenario which will unfold.”

Another analyst surprised by the rate performance was Neil Glynn, managing director and head of European transport equity research at Credit Suisse. He told JOC Uncharted in an interview June 17 that a lot of industry analysts would have expected the freight rate scenario in the second quarter to be considerably weaker.

“That has been very surprising, but it is also a good validation of the action taken from the management team across the sector,” he said. “I think if you asked most people 12 months ago what the end result of a period such as this would produce, higher freight rates would have been at the end of that list.

“Clearly we need to continue to watch this very closely,” Glynn added. “But I do think that the culture of the industry leaders has actually changed, which is resonating in freight rate management. The second half may turn out to be worse than we expect, but I have certainly gained some confidence through the first half of this year.”

IHS Markit, parent company of JOC.com, on May 20 downgraded its outlook for international trade volumes in 2020 because of the COVID-19 impact on demand, forecasting a 10.1 percent year-over-year decline after predicting a 2.1 percent increase as recently as February. The revised forecast expects container volumes to rebound by 10.3 percent and 4.4 percent in 2021 and 2022, respectively, before settling into low-single digit growth.

On the Asia-Europe trade, the latest volume data available from Container Trades Statistics (CTS) show volume declining in April by 20 percent year over year to 1.14 million TEU. THE Alliance of Hapag-Lloyd, Ocean Network Express, Yang Ming, and HMM, and the 2M Alliance of Maersk Line and Mediterranean Shipping Co., will cancel 75 sailings through September in a bid to match capacity with weak anticipated volume levels.

Maersk said June 17 that healthier-than-expected container volumes were behind the carrier’s upgrade of its second-quarter outlook, with volumes now expected to be down 15 to 18 percent from the 2019 period. That compares to an initial outlook of a 20 to 25 percent decline the carrier gave May 13.

Container shipping line executives said in late May they were confident the industry would be able to withstand a double-digit volume decrease this year. The heads of CMA CGM, Hapag-Lloyd, and Maersk Line said the ability to quickly match capacity with demand and avoid price wars had left the industry in a better position to shrug off the volume declines of the second quarter and build on recovering demand through the rest of the year.