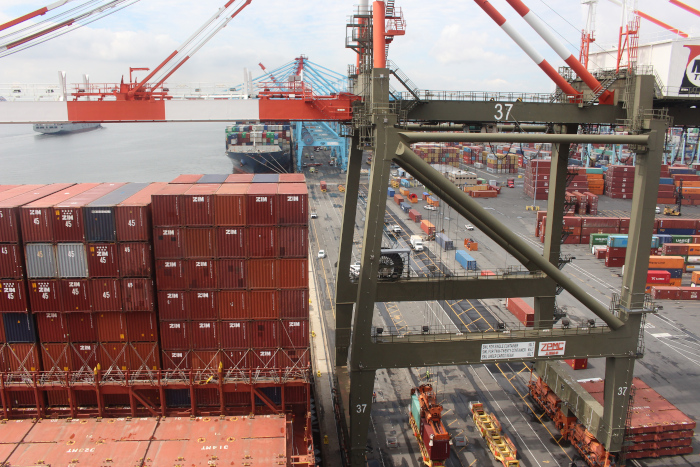 Zim Integrated Shipping Services has added to its portfolio of port calls with Asian imports that are alternatives to South California with two new routes to the Gulf Coast and Florida. Photo credit: Hugh R. Morley.

Zim Integrated Shipping Services and the 2M Alliance are deepening their partnership via new Asia-Gulf services, shoring up the latter’s reduced trans-Pacific presence due to HMM’s uncoupling announced Monday. The move also shows how Zim is finding new ways to tap growing Asian trade growth despite not calling Southern California.

The two services — the US Gulf South China Xpress, leaving from Xiamen, and the US Gulf Central China Xpress, leaving from Ningbo — will launch on Aug. 16 and Aug. 18, respectively, and are the carrier’s first from Asia into the Gulf Coast. HMM said Monday it would leave the 2M Alliance of Maersk Line and Mediterranean Shipping Co. to join THE Alliance involving Hapag-Lloyd, Ocean Network Express (ONE), and Yang Ming.

"This is the third phase of our tightening cooperation with the 2M Alliance, now extending to our major trades,” Zim CEO Eli Glickman said in a statement. “I'm confident in our strategy, which gains momentum while our customers reap the benefits."

The new services will double to four the number of Asian services the carrier operates with the 2M Alliance and should boost Zim’s share of the Asian import market. Zim held 3.2 percent of the Asian import market in the first five months of 2019, roughly unchanged from the same period in 2018 and up from 1.6 percent in the same period in 2014, according to data from PIERS, a JOC.com sister company within IHS Markit.

Any increase, however, will only go some way to making up the expected share that 2M will lose with the departure of HMM. In the first five months of 2019, 2M held 22.6 percent of imports from Asia, the PIERS data show. The Ocean Alliance held the largest market share of US imports from Asia at 28.6 percent, with THE Alliance second at 24.7 percent. HMM held 5.8 percent of the market, slightly less than double the amount held by Zim, the PIERS figures show.

The 2M share would decline significantly with HMM’s departure. For example, if HMM had left the 2M Alliance on Jan. 1 this year, THE Alliance would have held 30 percent of US imports from Asia, Ocean 28.6 percent, and 2M 16.8 percent. However, 2M’s share will now be boosted by the volume carried on the two new Zim routes.

Import volumes into the Gulf Coast from Asia have been growing, with the coastal market share of imports from Asia increasing 21.8 percent in 2018 over the year before, according to PIERS figures. East Coast volumes in the same period increased 9.2 percent, and volumes through West Coast ports rose 5.8 percent. That increased the Gulf and East coast shares of US Asian imports 0.5 percent in each coast, while West Coast imports fell 1.1 percent, the figures show.

The two Gulf Coast routes add to Zim’s portfolio of Asian services routes that allow it to serve the US market without calling on the Los Angeles-Long Beach port complex. Zim operates Asian services calling the ports of Prince Rupert and Vancouver in Canada and New York, Baltimore, Norfolk, Savannah, Charleston, Jacksonville, Wilmington, Miami, Tacoma, and Seattle in the United States.

The first of the previous two routes, linking Asia with the US East Coast, began operating in September 2018; the second, from Asia to the Pacific Northwest and the Mediterranean, started in March.