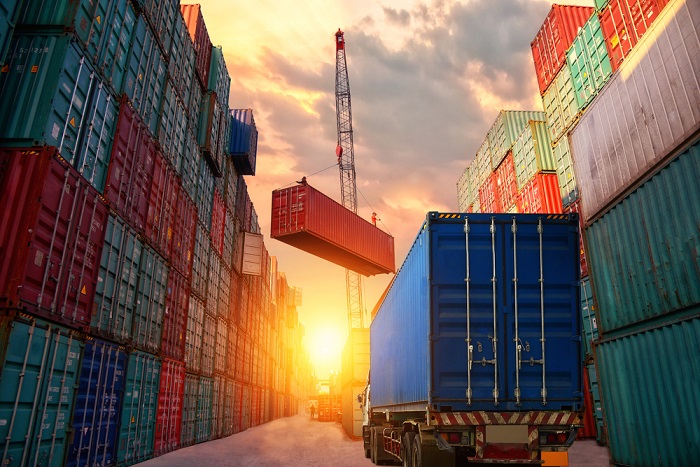 Starting next month, Zim American Integrated Shipping Services and HMM plan to charge truckers a fee for inbound containers that are unloaded at their warehouses and turned over to exporters that load the boxes with its product and dray them to the ports. Photo credit: Shutterstock.com.

At least two ocean carriers are cutting their administrative costs by passing on a new fee to US port truckers for street exchanges of containers, triggering a backlash from shippers and truckers concerned about added cost and fees.

Starting next month, Zim American Integrated Shipping Services and HMM plan to charge truckers a fee for inbound containers that are unloaded at their warehouses and turned over to exporters that load the boxes with its product and dray them to the ports.

Street turns are designed to take cost and complexity out of the transportation supply chain, and they are becoming more common at ports across the country. Since street turns eliminate the truck moves of empty containers to the ports, only to be trucked back out to exporters’ facilities, two time-consuming and costly moves are eliminated.

Joni Casey, president and CEO of the Intermodal Association of North America, which administers the UIIA, said the carriers filed their amendments as required, the UIIA committee analyzed the filings, and it recently determined there was “no finding of conflict” with the UIIA.

The UIIA does not get involved in commercial terms involving carriers and customers, Casey said, so its role ends with the determination that the amendments do not violate the terms of the UIIA agreement. She said Thursday that to date no other carriers have filed their intention of imposing a street-turn charge, although UIIA is looking into a report that another line has notified at least one agricultural shipper of a $75 street-turn fee. “This could impact us if more steamship lines join in,” the exporter said in a statement released Thursday by the Agriculture Transportation Coalition (AgTC). “It’s appalling,” the ag shipper stated.

Lawrence Burns, senior vice president of trade and sales at Hyundai America Shipping Agency, said HMM recognizes the beneficial effects of street turns in the supply chain, and it does not intend to charge the fee to beneficial cargo owners (BCOs). “HMM recognizes and promotes street-turn activity. A street turn benefits ports, container depots, chassis providers, shippers, and truckers. The charge that HMM has imposed is to the trucker, not the shipper, to cover our administrative costs for arranging and executing the street turn. We do not see this administrative charge to be a burden to truckers since there are still benefits to the operation for all participants,” Burns said. Zim was not immediately available to comment.

BCOs, especially agricultural shippers whose export operations are far from seaports, rely on street turns to reduce the cost of repositioning empty containers to their farms and storage facilities. “The fees imposed on street turns must be one of the least constructive, poorly considered steps conceivable. It injures all, including the carriers themselves, by adding to congestion and delay, which already make marine terminals at some of our largest ports the greatest challenge to the US export/import supply chain,” said Peter Friedmann, executive director of the AgTC.

“I think it is absolutely insane that anyone would want to disincentivize efficiency. Many terminals are currently not even receiving empties, so by street turning we are actually doing the ocean carriers good and helping them keep the cargo moving,” an AgTC member stated.

Drayage companies in Southern California oppose the charge, and they are concerned that other lines will begin charging administrative fees on street turns. First of all, it saddles trucking companies with administrative costs of their own in documenting the fees. Then truckers must attempt to pass the fees on to customers, said Weston LaBar, CEO of the Harbor Trucking Association (HTA).

Second, it’s another example, like store-door moves of containers, in which ocean carriers set the prices of the services that trucking companies perform. Third, the fee will disincentivize street turns, which developments in technology are making easier to perform now at ports that are grappling with unprecedented gate problems due to larger container exchanges from bigger ships, LaBar said.

In a broader sense, this is another example of carrier members of the UIIA, be they ocean or rail, levying storage or repositioning charges that truckers must deal with. “There needs to be an overhaul of the UIIA. It benefits the ocean carrier and railroads,” LaBar charged. The HTA the past two years has been working with BCOs and terminal operators to implement productivity-enhancing measures such as street turns and container peel-off piles, and the UIIA should encourage closer collaboration of its members, he said. “In the same way that marine terminals came to the table, we wish the ocean carriers would come to the table,” LaBar said.

Casey said a variety of intermodal stakeholders in fact participate on the committee that governs the UIIA — three motor carriers, three railroads, three steamship lines, and one equipment-leasing company — to ensure that it reflects current intermodal operations and is meeting the needs of industry. “It does not need to be ‘overhauled’ and has withstood the test of time,” she said on Friday.

The street-turn issue has also reached the port level. Most large North American ports, including Los Angeles-Long Beach and New York-New Jersey, facilitate working groups with local service providers to develop, pilot, and implement productivity-enhancement measures. Los Angeles, for example, is more than a year into a joint effort with GE Transportation to develop the Port Optimizer, an information portal through which ocean, rail, and trucking companies, equipment providers, BCOs, non-vessel-operating common carriers, and forwarders share shipment information so each member of the supply chain can marshall the necessary resources in advance of vessel arrivals to improve cargo velocity.

Street turns are one of a number of programs that could be plugged into the Port Optimizer. “We feel street turns reduce vehicle miles traveled and reduce gate congestion at the San Pedro Bay ports,” said Michael DiBernardo, deputy executive director of the Port of Los Angeles. “We will be speaking to shipping lines on operational programs, such as street turns, that will help supply chain efficiencies,” he said.

Similarly, New York-New Jersey is working with BCOs and motor carriers in the bi-state region on a project for posting equipment availability to facilitate street turns. “We continually look for ways to reduce congestion and cost,” said Bethann Rooney, the port’s assistant director, strategy and innovation.

AgTC has a sense of urgency in addressing the street-turn issue. “We have offered to assemble a committee of some of the most well-informed, experienced shipper members of the AgTC, including exporters, importers, and truckers to meet constructively with the carriers on this initiative. We are reaching out to port authorities, marine terminal operators, environmental organizations, and government agencies to participate in this effort to prevent further deterioration of the ag export supply chain,” Friedmann said.

Permalink Submitted by lg@maximustrans.com on Jan 12, 2019 6:48AM EST
That’s ridiculous that ZIM & HDM will charge motor carriers for street turns that will actually save them money from expensive in and out fees from the ports and depots. I’ve already instructed my dispatch department not to street turn any equipment for ZIM or HDM and I encourage every motor carrier to do the same.