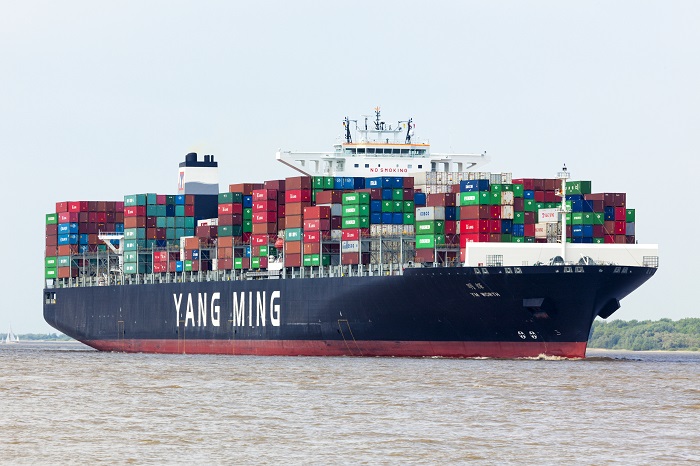 “While we are seeing others in the container ship industry face similar struggles, Yang Ming anticipates a healthier second half, driven by an improving supply and demand ratio,” the ocean carrier said. Photo credit: Shutterstock.com.

Average fuel prices jumped 25 percent in the first half from a year ago and average freight rates were about 10 percent lower, Yang Ming said.

What's more, Yang Ming's report provides further evidence that, despite GDP and trade growth in the world's three major economic zones (the United States, China/Asia, the European Union), operating costs, among other factors, have dampened the 2018 outlook. The container shipping industry earned about $7 billion in 2017, according to Drewry, following six straight years of losses. However, initial forecasts of an encouraging 2018 gave way to a slow start, as rising bunker fuel prices, higher charter/inland costs, and ocean overcapacity concerns have hit first-quarter and first-half results.

Friday, Hapag-Lloyd posted a $116 million first-half loss, citing both fuel costs and “geopolitical uncertainties.” Maersk Tuesday lowered expectations for earnings before interest, tax, depreciation, and amortization (EBITDA) from a range of $3.5 to $4.5 billion, from its initial estimate of EBITDA of $4 to $5 billion. Maersk said it still expects a 2018 profit, although it didn’t note whether it still expects it to exceed its 2017 profit of $356 million.

CMA CGM and Wan Hai also managed to turn in positive operating margins of 1.6 percent and 1 percent, respectively. Alphaliner noted that the remaining eight carriers all reported negative margins, with Hyundai Merchant Marine remaining at the bottom of the list for the eighth consecutive quarter with a margin of negative 15.6 percent.

The global container fleet is forecast to increase 5.4 percent this year as container volume rises 5.3 percent, according to IHS Markit’s Container Ships Forecast.

“While we are seeing others in the containership industry face similar struggles, Yang Ming anticipates a healthier second half, driven by an improving supply and demand ratio.”

Second-half performance is expected to improve, due to stronger peak season demand and less new ship capacity entering the market, which should boost freight rates, the carrier said.

Yang Ming says it anticipates a better operating performance and results in the near term, due to the improving supply/demand ratio and a recovering shipping market in 2019.

“These ships will revitalize and reshape our fleet,” Krueger said. “Yang Ming’s equity, strengthened by the injection of $343.5 million capital and a $255 million secured convertible bond issued on May 25, 2018, together with our increased government-related ownership of 45 percent will bolster Yang Ming’s access to financing channels in Taiwan.”

Showdown between shippers and carriers on flurry of surcharges

Navigating the Winding Roads This Peak Season & Beyond
END_OF_DOCUMENT_TOKEN_TO_BE_REPLACED