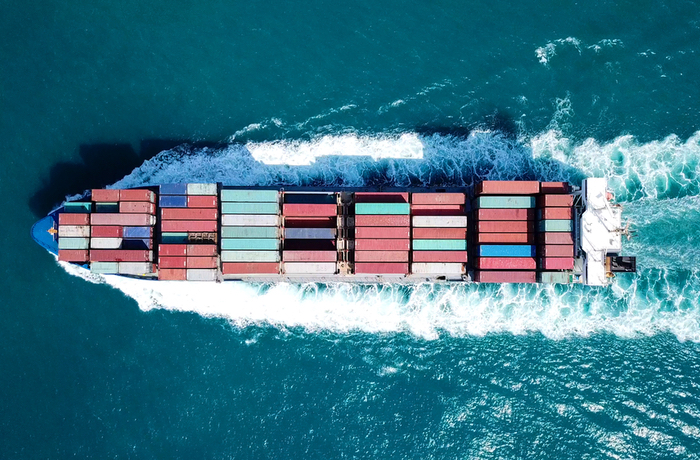 Reducing vessel speeds minimizes the amount of fuel burned in transit, thereby limiting GHG emissions on a per-voyage basis by up to 30 percent, according to one nonprofit. Photo credit: Shutterstock.com.

HAMBURG, Germany — The head of the group representing major global container lines on Wednesday downplayed the potential for mandatory slow-steaming to reduce carbon emissions, arguing that such rules would hamper the longer-term need to decarbonize shipping.

John Butler, CEO and president of the World Shipping Council, said that a number of studies suggest mandatory slow-steaming — one of many proposals the International Maritime Organization (IMO) is considering — would force carriers to deploy more ships in order to keep service commitments. With the IMO mandating sharp reductions in carbon emissions over the next two decades, bulk carriers — and, most recently, French President Emmanuel Macron — have argued for imposing speed limits of vessels.

Such rulemaking would create “an artificial incentive to build ships that we’re trying to replace,” Butler said at the JOC Container Trade Europe Conference. “You have to be careful you don’t exacerbate a long-term problem with a short-term solution.”

Ocean freight accounts for 2.4 percent of global greenhouse gas (GHG) emissions. Under the IMO's initial strategy on GHG emissions reduction released in 2018, the container shipping industry must reduce emissions by a minimum of 50 percent compared with 2008 levels by 2050, pursuing efforts to phase them out completely. Equally importantly, the IMO requires finalized short-term measures by 2023 and mid-term measures to achieve a carbon dioxide (CO2) emission decline of 40 percent by 2030.

Reducing vessel speeds minimizes the amount of fuel burned in transit, thereby limiting GHG emissions on a per-voyage basis by up to 30 percent, according to nonprofit environmental advocate CDP, formerly the Carbon Disclosure Project. Most bulk shipping companies are in favor of slow-steaming to reduce GHG emissions, with France proposing mandatory speed limits for ships during the spring meeting of the IMO’s GHG working group.

In his Tuesday keynote speech at the conference, Butler reiterated his call for the IMO to set up an international research board to direct and fund research and demonstration projects related to the development of next-generation marine fuels.  The goal of the proposed IMO research group will be to figure out which non-fossil fuels are the most commercially and economically viable and to help determine a pathway toward the widespread implementation of those fuels of the future.

“One of the reasons that it is so critical that we create an institutional structure for this kind of research and development work is that it is simply not feasible for any one company or any one country to provide the resources and focus that are necessary to get the R&D done on a scale and on a schedule that would allow the industry to meet the IMO’s greenhouse gas emissions reductions for 2050 and beyond,” Butler said.

There are nuclear powered ice

Permalink Submitted by mark.bennett@su... on Sep 24, 2019 5:12AM EDT
There are nuclear powered ice-breakers, submarines and aircraft carriers. One way to get zero carbon emissions from large container vessels would be to use nuclear power... for all vessels above a certain size. Contraversial maybe but then the challenges to reduce carbon emissions from ocean transport are significant.
Maritime News›Container Lines
Regulation & Policy›Transportation Regulations›International Transportation Regulations