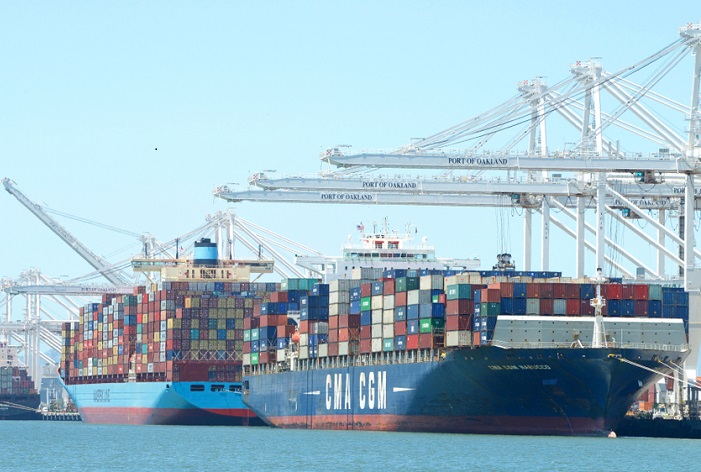 “Customers want more from their carriers. They expect new products and services to substantially enhance their experience and their predictability to their supply chain,” said Ludovic Renou, president of CMA CGM America. (Above: The Port of Oakland.) Photo credit: Shutterstock.com.

Shipping analyst Drewry had no sooner said on Jan. 21 that it had spotted the dawn of a new shipping arms race in the form of a significant cutback in orders for ultra-large container vessels (ULCVs) when reports surfaced of an order for 14,000-TEU-plus vessels.

The common refrains of “Here we go again” quickly ensued, but they missed the bigger picture. For even if those reports of new ULCV orders prove true, the overall outlook is for a tighter supply-demand balance. The global container shipping fleet will grow 2.5 and 2.6 percent this year and next, respectively, while volume will grow 5.5 and 5.3 percent in the same period, according to an analysis of IHS Markit demand forecasts and the orderbook.

As that capacity chapter closes, another one opens that will be less about the scale of capacity and more about how to use it more effectively. At its core is the question: can container lines tilt their offerings further from commoditization and toward injecting supply chain value — even to the point of some becoming integrators?

If so, that path offers carriers a future of higher margins and the promise of stability as well as greater defenses against threats from within and outside. The first threat is the so-called unreasonableness of the market, in which vessel orders come at the behest of governments looking to shore up weak shipyards and ensure that home-country shippers have competitive rates.

Carriers able to offer stickier service through quality differentiation can weather these waters, which have settled to some degree as once-entrenched sovereign backing for state-owned carriers has faded, allowing consolidation of major carriers over the last four years.

The outside threat to container lines is the accelerated relegation to moving containers from point A to point B, thanks to digitally savvy forwarders and the emergence of shippers such as Amazon that will manage their own services from Asian factories to US home delivery.

Shippers are starting to see the beginning of the pipeline of value-added services, but the rollout won’t make a splash like the deployment of a mega-ship. Instead, it will come in phases and be greeted both by interest and eye-rolls by shippers bemoaning that carriers don’t realize they’ve already commoditized.

Shippers, in short, will take their time to embrace change as they figuratively kick the tires and other carriers follow trailblazers in offering similar higher-value services. Carriers, meanwhile, will seek to disrupt and borrow from others. That can already be seen by the taking out of middlemen, as CMA CGM and Maersk Line have in terms of maritime insurance with their respective Serenity and Value Protect products. Or it can be adapting the enforcement of booked cargo functions, of which the New York Shipping Exchange provides, as one carrier plans to roll out later this year.

With shippers’ service needs rising — particularly when it comes to e-commerce shipments requiring 95 percent or better reliability — more of them are asking Maersk to help manage their supply chains beyond port-to-port shipping, according to Narin Phol, CEO for the Damco Americas region and incoming president of Maersk Line in North America.

E-retailers need more flexible volume capacity, with peak surges that bring three to four times as much weekly volume, he told JOC.com in December. In terms of providing greater value to specific types of shippers, Phol said Maersk is the furthest along when it comes to serving retail shippers, but he sees particular potential in the automotive, lifestyle/apparel, refrigerated goods, and electronics sectors.

The service offerings are still evolving. Although Maersk has identified potential in expediting cargo from ship to terminal to road/rail and even in warehouse by harmonizing the various assets and links, it’s looking beyond that and is crowdsourcing internally and asking beneficial cargo owners what they want. At the same time, it’s finding openings. Maersk increasingly is helping US importers from Asia with the origin part, from warehousing to door pickup, and expanding door delivery offerings for US import routings.

For CMA CGM and Maersk’s integrator ambitions and other carriers’ high-value service aspirations to become reality, carriers must use their assets — and the data that thread shipments across their various supply chain links — more effectively, or risk not being able to differentiate themselves from major forwarders that make their money on the very add-on to point-to-point shipping carriers want a greater piece of.

In Asia, CMA CGM has roughly 16 projects in which it’s extending its reach beyond the marine terminal to handle door-to-door shipping, including warehousing, Mathieu Girardin, vice president of CMA CGM's Asia regional office, told JOC.com last autumn. “Of course you can do it without controlling the assets, but when you control the operations, it gives you more credibility and ability to offer such landside services to customers,” he said.

That credibility is hard-won, but the alternative of not innovating and allowing commodification creep leaves a narrow future for carriers.

how about the lines get the