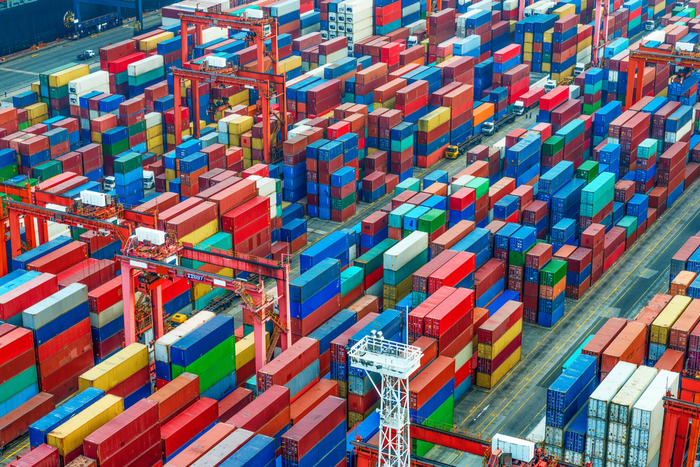 Global Port Tracker said reopening of US economy has retailers stocking their shelves for the holidays. Photo credit: Shutterstock.com.

US retailers, after significant growth in imports this summer, have revised upward their short-term forecast for volumes ahead of what they now see as a better-than-expected holiday season.

The rosier forecasts parallel what non-vessel operating common carriers (NVOs) have been seeing in volume forecasts from their customers.

The Global Port Tracker released forecasts on Wednesday that September imports will increase 1.1 percent from September 2019. Though a modest year-over-year gain, it is up sharply from the 9.4 percent decline the group forecast last month. Imports in October are now forecast to fall 9.2 percent year over year, an improvement from the 10.4 percent drop in last month’s report.

Still, the September Global Port Tracker, which is published for the National Retail Federation by Hackett Associates, projects year-over-year declines in imports as traditional holiday season shipments diminish in November and December. It forecasts that November imports will be down 6.8 percent from November 2019, down from the 5.8 percent decline in the prior report. December imports are seen dropping 9.6 percent from last year, slightly more optimistic than the 11 percent decline forecast in August.

Global Port Tracker said Wednesday that imports surged to “unexpected high levels” this summer as the US economy continued to reopen from shutdowns related to the coronavirus disease 2019 (COVID-19) and retailers began to stock up for the holiday season.

US imports were indeed robust in August. Containerized imports from Asia increased 13.4 percent from August 2019, and imports from mainland China were up 16.5 percent, according to PIERS, a JOC.com sister company within IHS Markit. Total US imports globally increased 11.7 percent.

Traditionally, so-called peak season imports include large volumes of merchandise for holiday shopping and, therefore, are normally strongest in September and October, giving retailers time to move goods from the ports to store shelves in time for Black Friday sales the day after Thanksgiving. This year, the COVID-19 pandemic has disrupted the normal seasonal shipping pattern, as holiday merchandise competes with e-commerce fulfillment and personal protective equipment (PPE) for vessel space.

Although in-store shopping remains limited, much of that demand is being satisfied online, and consumer demand has rebounded sharply from the lows experienced in April and May, said Jonathan Gold, NRF vice president for supply chain and customs policy.

“It’s important to be careful how much to read into these numbers after all we’ve seen this year, but retailers are importing far more merchandise for the holidays than we expected even a month ago,” Gold said in a statement accompanying Wednesday’s report.

NVOs in recent weeks have told JOC.com they have been revising their volume forecasts higher based on what they are hearing from customers and factories in Asia. A consensus is building that imports from Asia should remain strong at least through October.

There is also a feeling among some NVOs that the import surge will not end in October. “We expect to be busy through the holidays, for sure,” Kevin Krause, vice president of ocean services at SEKO Logistics, told JOC.com Wednesday. Krause said he is seeing indications that “post-Christmas season ordering” has begun, including orders for Valentine’s Day and St. Patrick’s Day.

With home remodeling on the rise during the COVID-19 pandemic, and the price of lumber and other building materials increasing, home-improvement retailers do not want to be caught with gaps in their stocks and empty shelves, as occurred this summer, said Jon Monroe, a consultant to NVOs.

“There has to be a replenishment. They’re building inventories for next year,” Monroe said.

Nevertheless, the outlook beyond October is still somewhat cloudy, given uncertainties around how quickly the US and other nations will recover from the economic impacts of the COVID-19 pandemic.

“Data from around the globe is a mix, with a weak recovery as Europe struggles with rising COVID-19 numbers, but China’s exports remain solid. Will it last? A lot of uncertainty is in play,” said Ben Hackett, founder of Hackett Associates.