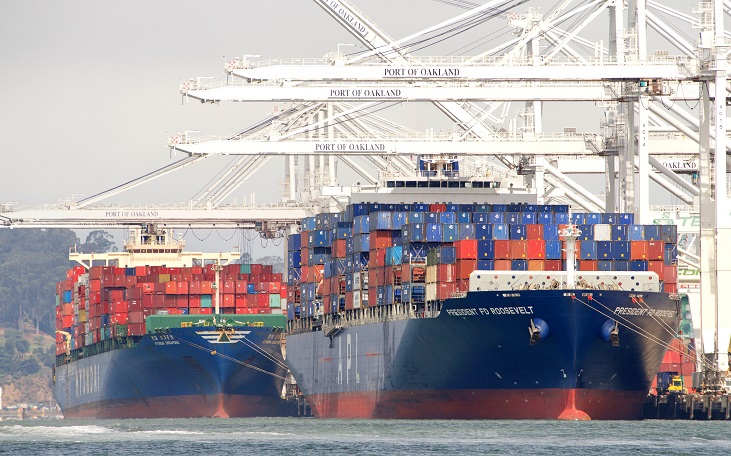 There is, perhaps, no better evidence to senior management on the necessity of proactive carrier engagement than this: transportation conditions can change quickly in container shipping, and an annual contract with a carrier is no guarantee of capacity when one needs it. (Above: The Port of Oakland.) Photo credit: Shutterstock.com.

US importers are facing a perilous peak season in the trans-Pacific this year, with many likely to be forced to pay significantly higher rates to get goods onto ships that in many cases are nearly sold out.

Ocean carriers in certain cases are holding the line on weekly minimum quantity commitments (MQC) as they have done in prior periods of tight capacity, meaning that any given shipper will be allocated only one week’s worth of capacity out of its total annual MQC. As an example, with a total annual commitment of 1,000 FEU, just 20 FEU or 1/50th would be allowed.

Any volumes over that, some carriers are saying, will need to be moved at current spot rates that today are about 50 percent higher than the roughly $1,000- to 1,200-per-FEU rates from China to the West Coast that many eastbound contracts settled for in the contract year beginning on May 1. Since hitting a 2018 low of $945 to the West Coast, spot rates tracked by the Shanghai Containerized Freight Index were $1,616 on July 20.

“We’re counseling our customers to prepare for a tight space situation from mid-July through September,” Simon Munn, vice president of full container load product and capacity management at DHL Global Forwarding, told Senior Editor Bill Mongelluzzo in July. What are the implications of this? There are several.

It’s a reminder that conditions change quickly in transportation markets, and such changes aren’t easily foreseen. An annual contract with a carrier is no guarantee of capacity when one needs it, especially when conditions tighten.

Carriers are much maligned for their chronic inability to make a decent return and for allowing others such as forwarders to profit by using their ships. That said, carriers hold all-important cards as the ultimate providers of capacity, and they flex their muscles occasionally. They are all too easily written off due to the commoditization of the carrier business and the progress forwarders are making in technology.

Carriers might struggle to maintain a general rate increase (GRI), their sometimes clumsy effort to drive up prices laughed off by the market. They can withdraw capacity, however, and that will have a material impact on the market.

It is happening in the trans-Pacific with the recent announcements of the 2M Alliance suspending a weekly service effective July 4 and THE Alliance’s cancellation of a service in August. The capacity reductions amount to nearly 7 percent without considering the Zim/2M rationalization of Asia-US East Coast service that by itself will result in a 5.2 percent reduction in total capacity in that trade, according to industry analyst Alphaliner. Any lack of pricing discipline becomes immaterial when there is simply no space to be had.

On the importance of proactively managing carrier relationships

That’s why effectively managing carrier relationships, more of an art than a science, is incumbent upon anyone — forwarder or beneficial cargo owner — that is on the buy side of ocean container space. Building credibility with carriers may be a laborious, drawn-out process, but, strategically, it should be ingrained in the thinking of anyone on the buy side.

Little things such as consistently providing accurate forecasts up to eight weeks out, tendering actual container loads against confirmed bookings, living up to MQCs, and building long-term personal relationships with key people at select carriers can make a difference when space tightens. Educating internal stakeholders and senior management as to the rationale for proactive carrier engagement can ensure the needed support.

And that typically happens as a result of carriers’ acting in self-preservation. Until such day as this business fundamentally changes, carriers will struggle to maintain pricing discipline when even a whiff of overcapacity exists, and/or when they start losing money or believe they are under threat, they’ll do what it takes to maintain prices and adequate revenue, including canceling services.

President Donald Trump’s threatened tariffs are one such risk. They would hit all China-to-US trade if fully implemented, and would force carriers to take matters into their own hands. Few around in 2010 will forget when carriers, reeling from multibillion-dollar losses in 2009, laid up record capacity and were unable to handle an unanticipated surge in trade.

It’s noteworthy that the topic of technology, which can dominate discussion in this market, is largely a non-factor when confronted with the need to manage the impact of blunt-force actions such as capacity withdrawal and the resulting market impact.

But there are opportunities for carriers to think and act differently. The New York Shipping Exchange model of differentiated pricing allows carriers to price dynamically like airlines do based on price levels the market will support at any given moment, versus the bull-in-a-china-shop approach of the tradewide GRI. The latter is rarely successful except when coupled with underlying capacity tightness, a circumstance that occurs all too infrequently.

Permalink Submitted by ferrullig@minds... on Jul 30, 2018 11:16AM EDT
Just as carrier decision making in the timing of fuel surcharges and capacity management have proven to be terribly bad ones, shippers signing a contract for an MQC with no quantified requirements by week or month, is just as bad of a decision. Yes, it takes time and effort to go to that granularity and it involves some risk, but consider the flat number per year and it's impact in situations where the carriers do manage capacity and the markets get tight. Most shippers have been taught by carriers that this doesn't happen often, they don't manage their business well as can be noted by a rate of return of less than 3% over more than two decades. That's the risk, that the carriers will at some point in time make the smart decisions, as done in late 2009 and 2010 - and never done again. What we see today in capacity management is nothing compared to the 2009-2010 time frame when over 600 ships were anchored, not 4 strings temporarily take on-out of service. The shippers seem to gamble that the carriers won't make the smart decisions like they had a chance to do in the beginning of 2017 but reverted to form of chasing volume and market share, and in 7 out of the last 8 years, they'd be right. Will that last forever?

i think the entire shipping

Permalink Submitted by TAVANZATO on Jul 30, 2018 11:29AM EDT
i think the entire shipping community would benefit if carriers started signing contracts at levels that were profitable and sustainable. if rates were not allowed to fall below $2000.00 to the wc and $3000.00 to the west coast no cargo would be lost to "rate destruction" and the entire trade would benefit. while i think the practice of making per diem and demurrage as a major profit center ( charging 3 times as much when the container is empty as when it is actually employed and laden ), the carriers have to make money somewhere, yes they are foolish for offering non- compensatory rates, but shippers also need to take some blame too. a couple of more hanjin's and wonder what that will bring
Maritime News›Container Lines
International Logistics
International Logistics›Logistics Providers
Maritime News›Trade Lanes
Maritime News›Trade Lanes›Trans-Pacific
Africa
Asia
Asia›China
Australia/Oceania
Europe
Middle East
North America
North America›United States
South America