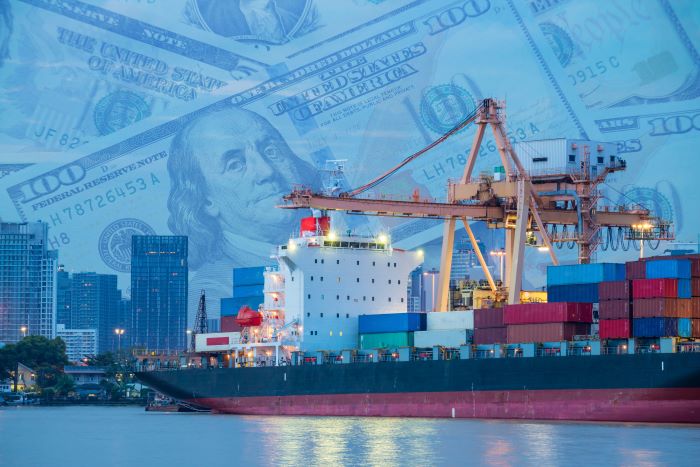 The Federal Maritime Commission has expanded the scope of a fact-finding investigation into carrier practices, including “practices related to the carriage of US exports.” Photo credit: Shutterstock.com.

US exporters are in an uproar over denied and canceled bookings and raising alarms with Congress and regulators in Washington, DC. But the complaints are playing out against unprecedented global stress on the container system and a carrier industry that is changing in ways that will likely mean higher costs and less access to equipment in the future.

Agriculture exporters’ complaints also strike deeper chords of US maritime policy that years ago walked away from subsidizing a US flag fleet intended to provide viable transportation for US exports.

Under pressure from exporters and their representatives in Congress, the Federal Maritime Commission (FMC) last month expanded the scope of a fact-finding investigation into carrier practices launched back in March, stating the expanded scope will focus, among other things, on “practices related to the carriage of US exports.”

FMC commissioner Michael Khouri was especially tough on carriers in a speech on Dec. 8, calling the actions an “abandonment of a significant US export industry” — referring to agriculture — which is “shutting them out of global markets.” The agency is determining whether the refusal of some container lines to reposition containers in the US interior violates the Shipping Act of 1984.

A breakdown of the container shipping system

But while exporters have, without question, been severely impacted this year, they are not alone. During a year when container shortages exploded into a global, system-wide breakdown spurred directly by the COVID-19 pandemic, complaints by importers about a lack of equipment and difficulties getting containers loaded onto ships in Asia have been just as frequent.

“Some of the exporters — and some importers — are complaining they can’t get all the equipment they want, and you have to scratch below the surface and ask why is that the case? The reason is that American consumers want stuff, they want a lot of stuff, and they want it now, via next-day delivery and they don’t want to wait three days,” said Jeffrey Lawrence, chair of the transportation and trade practice at the law firm Cozen O’Connor in Washington, DC, and executive director of the Ocean Carrier Equipment Management Association (OCEMA).

“The fundamental driver here is the enormous, record-breaking consumer demand in the US [and in other developed economies] which has to be satisfied. So, the equipment crunch is a symptom, not a cause,” he said.

Indeed, the stark reality this year, observers say, is that problems such as distribution and transload centers operating at less than full capacity to de-van containers due to social distancing, leaving containers to wait weeks to be unloaded, are among the issues that have brought what needs to be an unimpeded circulatory system of container equipment flow to its knees this year.

“The speed of movement of containers is at the heart of intermodal transportation. Right now our intermodal infrastructure — physical infrastructure, manpower, and equipment -- is being overwhelmed by the huge US consumer demand,” said Lawrence. “Everyone in the supply chain is trying to do the best they can and the idea that there are villains here is ludicrous.”

The issues US exporters are facing, moreover, are likely to be long-term in nature for reasons unrelated to the pandemic. A greatly consolidated carrier industry able to effectively manage capacity and more focused on the bottom line is less likely to subsidize the positioning of containers at often remote interior locations as they have done for years.

“For many, many years because there was such an imbalance the lines positioned containers for exports without a lot of remuneration and their willingness to do that has changed,” James Newsome, president and CEO of the South Carolina Ports Authority, told JOC.com.

“You are seeing an ocean carrier industry that is now very attuned to shipment economics. In my ocean carrier time, often times we felt that if I have a box in Chicago and it’s needed in Lincoln, Nebraska, for an export load I would just move it there at my expense. I don’t think the carriers are willing to do that today,” Newsome said. “It’s an economic decision they are making, and they have the right to decide what cargo to carry or not carry to maximize their profitability.”

Others agree the carrier landscape is changing in ways that will result in higher costs going forward.

“If you want to keep doing business today the way you did when there was a glut of space, it is going to be hard to do that,” Lawrence said.

Indeed, the dispute gets to the heart of ocean transportation in the US. Carriers are private businesses and have the right to take actions to grow their bottom line. There is no requirement that they carry exports. Yet because nearly all major ocean carriers are owned outside the US, they are convenient punching bags for exporters who frequently seek a political solution to what is normally a business issue. If there is to be a political solution, one option that almost never gets discussed is whether to divert the billions in US agriculture subsidies ($22 billion in 2019) to subsidize transportation to ensure US exports are cost-competitive with goods from other countries.

The global nature of the container system breakdown this year driven by the COVID-19 pandemic is going to make it difficult for regulators to prove that carriers engaged in discriminatory behavior. As Newsome says, not carrying cargo goes against everything carriers believe in.

“In my long shipping career we never got rewarded for moving empties so we would do anything and everything we could to handle export containers as opposed to moving empties,” said Newsome, who was president of Hapag-Lloyd (America) Inc. before taking over the South Carolina Ports Authority in 2009 and previously held positions at Nedlloyd Lines, which was later acquired into Maersk. “The carriers want to carry cargo and they will move heaven and earth to get that done. In other words, there is no effort out there by carriers to avoid carrying cargo.”

What is different now is that shippers will increasingly need to get their cargo to the container rather than containers coming to find the cargo. When Hapag-Lloyd announced in October it was suspending export bookings, which elicited a howl of protest from exporter groups, the carrier’s US president, Uffe Ostergaard, told JOC.com the line was still accepting some ag export shipments when they are generated in proximity to ports. For example, at transloading facilities near West Coast ports where grains are transferred from rail cars to marine containers.

Unless they can prove that in refusing to carry certain exports and canceling certain bookings container lines engaged in discriminatory behavior in violation of US shipping law, exporters will find little meaningful relief in Washington. That’s unless they were to go for the “nuclear option” and seek changes to the Shipping Act, which was last amended in 1998.

Such changes could, for example, force carriers to carry exports, but that would run counter to the long-term trend of deregulation in freight transportation and potentially lead to further reduction in shipper choice if carriers — already frustrated by high costs and poor productivity in the US — responded by opting out of the US market to avoid being forced to carry unprofitable cargo.

How to Improve OTIF: 15 Tips for On Time and In Full Delivery
END_OF_DOCUMENT_TOKEN_TO_BE_REPLACED