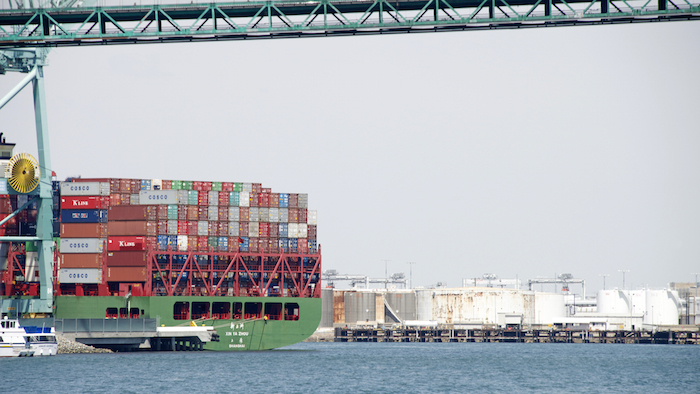 With the return of a semblance of normalcy to the trade, some beneficial cargo owners aren’t shipping their holiday season shipments as early this year as they did in 2014, when they sought to beat West Coast labor disruptions. The peak season has traditionally started in July, but many BCOs appear to be delaying shipments until August or even September.

Apparel importers, for example, expect greater inbound shipments from Asia this season, but they are shipping later. “Peak season isn’t July anymore. It’s slipping back a bit for many of the fashion companies,” said Julie Hughes, president of the U.S. Fashion Industry Association. “We’re hearing from our members that they are looking at shipping in August, September or even October.”

Spot trans-Pacific freight rates have eased in the months since West Coast port congestion sopped up some of the vessel overcapacity on the trans-Pacific, but they may rise during the peak season as carriers implement general rate increases and a peak-season surcharge. Over the longer term, however, spot rates are likely to trend downward as carriers continue to cascade excess tonnage from the Asia-Europe trade onto the Pacific.

Some changes caused by the prolonged port disruptions last fall and winter seem likely to persist. A significant amount of trans-Pacific eastbound volume may have shifted permanently to the all-water route to the East Coast, as shippers seek to avoid any recurrence of the port congestion that dogged their supply chains through West Coast ports last winter.

“A lot of that shift has already happened. Now the question is whether or not that cargo will move back to the West Coast,” said Jonathan Gold, vice president for supply chain and customs policy of the National Retail Federation. “Shippers are looking at shifting back to the West Coast now that things have settled down, but there are still congestion issues in Los Angeles-Long Beach and Oakland because of the bigger ships and chassis shortages, and we’ve got to figure out a way forward.”

Carriers have been quick to meet the demand for more all-water capacity to the East Coast. “There’s a lot more additional tonnage coming to the East Coast via the Panama Canal,” said Neil Dekker, director of container research at London-based research and consulting firm Drewry. Carriers have launched six services from Asia to the East Coast since the beginning of 2015, with five of those routed through Panama. Although the existing canal limits transits to Panamax-sized ships of up to 5,000 20-foot-equivalent container units, shipping lines are launching the new Panama services to build up their customer base in anticipation of next April’s opening of new post-Panamax locks.

Import volume at 11 major U.S. gateway ports on the East, West and Gulf coasts is expected to increase 7.3 percent year-over-year in July, as retailers prepare for back-to-school sales, according to the Global Port Tracker Report. That indicates U.S. consumer confidence is returning, a positive sign for imports, said Ben Hackett of Hackett Associates, which produces the monthly report for the NRF. Port Tracker estimated the volumes handled by the major gateway ports during the first half of 2015 totaled 8.8 million TEUs, up 6.4 percent over the same period last year.

Nevertheless, the hangover from last winter’s labor strife is plaguing shippers at the Port of Oakland, where labor shortages are causing severe delays. The delays are so bad that, at the beginning of July, the G6 Alliance started skipping its Oakland call on the PA2 service from North Asia. APL, one of the six G6 Alliance members, said the PA2 would resume Oakland calls when it observes improvement. The service continued to call at the Port of Los Angeles.

“I have a contract with APL that will now seriously damage the available capacity in Asia by losing this string,” said Pat Moffett, vice president of global logistics at VOXX International, a large importer of consumer audio electronics. VOXX uses Oakland as the port of entry for Asian imports to supply retail outlets east of the Mississippi because it’s the closest port to its main distribution center in Reno, Nevada.

“I can’t move down from Seattle, and I can’t move up from Los Angeles, because there is so much extra cost involved,” Moffett said. “There’s nothing we can do because we’ve got to get that inventory into Reno, so we’re waiting it out. But the ships dock and take four days to discharge. There’s no room on the pier, and the truckers are still arguing with the longshoremen. It just goes on and on.”

Last year’s disruption of supply chains has made it difficult for importers to assess the market for their products this year. They think demand is fairly strong, but they don’t have an accurate base line from last year. “We had some shippers moving cargo up in time or coming in through other ports, so it’s become really difficult to tell what the volume is going to be this year, but I anticipate it’s going to be about what it was last year,” said Dave Akers, CEO of Worldwide Logistics Associates, which manages the supply chains for the Toy Shippers Association and the Houseware Shippers Association. “We’re hoping it’s going to return to normal, but it’s been a battle for us,” he said of last winter’s port congestion.

Apparel importers expect greater inbound shipments from Asia this season, but they are shipping later. “Peak season isn’t July anymore. It’s slipping back a bit for many of the fashion companies,” said Julie Hughes, president of the U.S. Fashion Industry Association. “We’re hearing from our members that they are looking at shipping in August, September or even October.”

JOC Economist Mario Moreno expects U.S. containerized imports from North Asia to grow 5.2 percent this year, down from last year’s 5.5 percent rate. “The region will continue to be challenged by low-cost producers elsewhere in the world, but much of the competition will come from lower value-added commodities such as textiles,” he said.

China is upgrading its production capabilities to higher value-added products and is therefore ceding lower-priced goods to competitors. Moreno expects this trend to continue and even accelerate through 2017, so growth in value will improve even as growth from Northeast Asia will be relatively muted.

Moreno expects containerized imports from northern Europe to increase 9.9 percent this year, significantly greater than last year’s 7.9 percent growth. “The near-term forecast calls for broad-based growth, both in terms of commodity mix and country of origin,” he said.

But the longer-term outlook for imports of automobiles and related products from Germany is decidedly mixed because Mercedes-Benz, BMW and Audi plan to begin manufacturing vehicles in Mexico. “Over time, this could have a significant impact on the inbound lane from northern Europe, where auto parts and related products comprise approximately 13 percent of total volumes,” Moreno said.

There is no shortage of trans-Pacific vessel capacity now, which was somewhat tight during the winter, especially on the all-water route to the East Coast. This enabled carriers to raise their spot freight rates until May when the ILWU and the PMA signed their new labor contract. But any capacity tightness has eased since then, and spot rates are trending down.

“There’s been a very significant falloff in the spot market in a short space of time,” Dekker said. According to the Shanghai Containerized Freight Index, the average spot rate for shipping a 40-foot-equivalent unit container from Shanghai to New York peaked at more than $5,000 in mid-February, when West Coast port congestion was at its worst. That was about double the average rate from Shanghai to Los Angeles-Long Beach. By the end of June, the average SCFI spot rate to the U.S. East Coast was $2,866 per FEU. The average SCFI spot rate to the U.S. West Coast was $1,229 per FEU, down 30.5 percent from $1,769 per FEU a year earlier.

BCOs signed annual trans-Pacific contracts for 2015-16 with all-in rates including fuel surcharges from North Asian ports to the U.S. West Coast that are about the same as last year at $1,600 to $1,650 per FEU, according to a source close to the negotiations who provided average negotiated rates on the condition of anonymity.

The Transpacific Stabilization Agreement among carriers called for a peak- season surcharge of $400 per FEU and a general rate increase of $600 per FEU, both as of July 1. Drewry’s Hong Kong to Los Angeles Container Rate benchmark jumped by $100 per FEU to $1,418 per FEU following the July 1 GRI, but it dropped back to $1,218 per FEU by July 15.

The pattern of weak GRIs seems likely to continue in the face of trans-Pacific overcapacity. Slot utilization in the services to the West Coast is averaging 85 to 90 percent and above 90 percent to the East Coast, according to the SCFI. As long as carriers order and deploy mega-ships of up to 20,000 TEUs on the Asia-Europe trade lane, they will continue to cascade older, smaller, but still large ships onto other trades, including the trans-Pacific.

“Every quarter, you have 12 to 15 ships of 13,000 to 18,000 TEUs coming to market, so there is a continuing process of cascading ships of 8,000- to 10,000-TEU ships out,” Dekker said. “There’s no doubt the trans-Pacific is going to be one of the homes for these smaller ships.” Eastbound head-haul capacity on the trans-Pacific increased 6.7 percent in the second quarter from the first quarter.

The carriers’ global strategy has been to deploy the biggest ships they can in order to reduce slot costs in the face of flat to declining freight rates. “Unfortunately, that strategy is unraveling a little bit because global demand is weak,” Dekker said.

Nevertheless, carriers recorded healthy operating profit margins in this year’s first quarter because of lower bunker fuel costs, which were averaging less than $300 per ton, about half of what they were a earlier. But much of the savings was passed along to shippers in the form of lower freight rates because of overcapacity, especially in the Asia-Europe trade.

“There may well come a time this year when the lines have to think about pulling whole strings,” Dekker said. “They are already taking out 12 sailings on the Asia-Europe trade, which is unprecedented.”