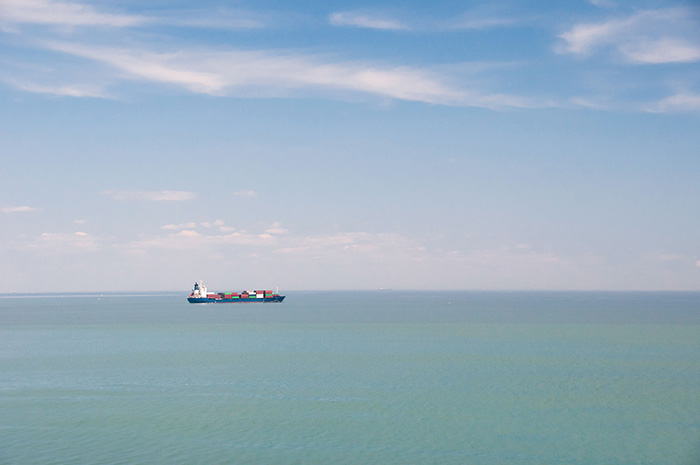 The global container shipping market is clearly stronger than last year, but just how much stronger

remains a subject of debate.

SEA ISLAND — Despite an apparent recovery in the container shipping industry as seen in higher spot rates and shipping company share prices, there remain parallel, divergent narratives as to how strong the market truly is headed into the 17th Annual TPM Conference later this month. The TPM event is used by shippers, carriers, and intermediaries to assess the state of the market headed into annual contract negotiations.

Several observers, analysts and carriers are convinced the market is recovering off an extremely weak 2016; trans-Pacific spot rates are up more than 50 percent since early December, Hapag-Lloyd shares are up 50 percent since Nov. 30 (as of Feb. 7), and Maersk B shares are up 18 percent during the same period. The massive industry consolidation initiated in 2016, which will eliminate seven of the top 20 carriers, has led many to believe that carriers will have a better shot at higher rates this year after a disastrous 2016 when contract and spot rates hit record lows and carriers collectively lost billions. Analyst Dynamar said carrier losses for 12 of the top 25 container lines through the third quarter had already hit $13 billion.

Last year and the year ahead were aptly summed up in the Maersk Group’s fourth-quarter results. The company posted a quarterly loss of $376 million with average rates plunging nearly 19 percent in 2016, but CEO Soren Skou predicted rising rates would allow the Maersk Line business to achieve an improvement in excess of $1 billion in profit compared with its total 2016 loss.

“I do feel that in 2016 we found the bottom,” Dave Arsenault, the former US president and CEO of Hyundai Merchant Marine and now a consultant, told the Georgia Foreign Trade Conference on Monday.

Other analysts also see a recovery coming this year, if only due to how low carriers allowed rates to fall during negotiations for 2015 to 2016 contracts when some contracts settled out at $750 per 40-foot-equivalent unit, a record low.

“Last year, you had overcapacity and completely crazy pricing. This year, you will still have overcapacity, but pricing will be more realistic,” Philip Damas, director of Drewry Supply Chain Advisors told the Georgia Ports Authority’s Georgia Foreign Trade Conference. He said that in trans-Pacific annual tenders with which Drewry is assisting beneficial cargo owners, “we’re seeing rate increases of 40 percent. When was the last time we saw 40 percent increases? So the market really is switching.

“If you were a BCO last year you were a hero because you secured huge reductions in your freight. This year it is going to be a lot harder to be a hero in your organization as a BCO,” Damas said.

But others remain skeptical, citing multiple mega-ship deliveries yet to occur and at least two years of overcapacity still likely remaining in the market, despite much higher levels of scrapping last year and returns of unneeded chartered tonnage to owners. Carriers returning unneeded tonnage led to the scrapping of a 7-year-old container ship last year, the newest boxship ever sent to the beaches. Scrapping surged 260 percent year-over-year in 2016 to 638,685 twenty-foot-equivalent units and is expected to reach 717,700 TEUs this year, according to IHS Markit data.

“There is certainly a sense of optimism on the carrier’s part,” Hua Joo Tan, executive consultant at Alphaliner told the GFTC. “If we look at Asia-Europe contracts signed in early January a number of them took at least an 80 to 100 percent increase. So obviously with this there will surely be some optimism on the part of the carriers.”

But he cautioned that the days of destructive rate competition are not over. “The battle hasn’t ended, there is still significant competition as far as new capacity coming that hasn’t been factored in,” he told the GFTC.

Tan added: “My view is we are still in the midst of a major battle within the container shipping market. The relative calm that we are seeing right now was really the result of the Hanjin bonus, because the removal of Hanjin really helped the rest of the market,” he said.

“What this means is that the fight for market share is going to continue,” Tan said. “There is still a significant amount of new vessel supply that is coming into the market over the next two years. I do not expect to see this peace that we have seen to continue for too long.”

Vigorous competition among carriers could therefore still be seen in the trans-Pacific this year. The Ocean and THE alliances have still yet to announce their networks, which is leading shippers into a wait-and-see mode until information on sailing dates, port rotations, and transit times becomes available. Speculation abounds about why the alliances have still not provided details of their networks, and the wait continues as the market moves into 2017. With little in terms of service to discuss, discussions invariably turn to rates, Arsenault said.

The lack of information from the alliances “brings in a level of uncertainty amongst BCOs right now who are going into contract season and are buying services that they’re not completely sure what they will look like,” Arsenault told the conference. “What are the transits? What are the rotations? That certainly make it more challenging from a carrier standpoint to try to sell service at rates that have adequate returns when there is an uncertainty about what it is that they are really going to be selling.

“It forces them to sell based on price and therein continues the problem of lower rates that are not sustainable which can ultimately lead to further consolidation,” he said.