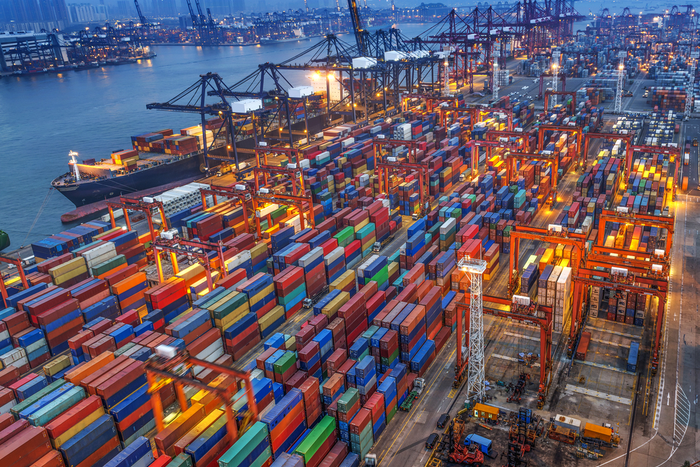 July 1 general rate increases of $250 to $800 per FEU will apply to most shipments in excess of importers’ minimum volume commitments. Photo credit: Shutterstock.com.

With signs of US imports from Asia recovering, trans-Pacific carriers on Wednesday will impose a highly unusual third general rate increase (GRI) in one month’s time. Importers and forwarders say carriers, who filed July 1 GRIs as high as $1,500 with US regulators, this week are quoting figures between $250 and $800 per FEU.

There’s nothing new about carriers levying such charges as the summer-fall peak shipping season for retailers approaches. However, carriers already implemented GRIs on June 1 and June 15, so the July 1 increase will be the third in one month, an unusual occurrence even during periods of high demand. Carriers and their customers told JOC.com rates will continue to rise even though volumes are down almost 10 percent from the first five months of 2019, according to PIERS, a JOC.com sister company within IHS Markit.

Eight carriers last month filed July 1 GRIs with the Federal Maritime Commission, the US’ top maritime regulator. Hapag-Lloyd filed a $1,500-per-FEU GRI; APL, Evergreen, HMM, Yang Ming, and Ocean Network Express filed $1,000 GRIs; and Cosco Shipping’s GRI was $800 per FEU. Hapag-Lloyd also posted a $1,500 GRI for July 20 and a $1,500 GRI for Aug. 1, according to Sea-Intelligence Maritime Consulting. Carriers rarely succeed in implementing the full GRIs they post with the FMC.

One non-vessel operating common carrier (NVO) told JOC.com he has been quoted GRIs in the range of $250 to $400 per FEU while two others said they have been quoted $400 to $800 per FEU.

Kevin Krause, vice president of ocean services at SEKO Logistics, told JOC.com last week he is seeing GRIs of $500 to $800 per FEU. “Some are talking about a PSS [peak season surcharge] on top of that,” he said.

The GRIs will apply to freight volumes shipped in excess of minimum quantity commitments (MQCs) by beneficial cargo owners (BCOs) as well as NVOs. The NVOs and BCOs said some carriers are indicating that peak-season surcharges may be charged on top of the GRIs. In past years, however, carriers often began to quote PSSs in June or July, but the peak-season surcharges were delayed until early fall, when the majority of holiday merchandise is shipped.

Jon Monroe, who serves as a consultant to NVOs, said carriers are emboldened by GRIs they imposed on June 1 and June 15, which is why they are coming in with a July 1 GRI. “Carriers are now more confident about their future, given the general rate increases, and another on the way,” he said in his weekly newsletter to clients last week. “What is happening now is the carriers are overbooking vessels and forcing containers to be rolled.”

Bruce Chilton, vice president of trade management at Ascent Global Logistics, said a number of carriers have announced a GRI for July 1, and some for mid-July as well. “We will definitely see rates rise on July 1 and July 15,” he said.

NVOs with contracts that name specific retailers and importers are still able to ship those volumes under the contract rate, but any shipments above the weekly allotment must pay the additional rate.

“Our allotments are pretty much used up. For anything above that, it costs about $500 to get on the vessel,” said Jack Chang, managing director of the NVO JUSDA.

It is unlikely that GRIs of $1,000 per FEU or higher will be implemented. Carriers must file GRIs 30 days in advance with the FMC. They cannot implement a higher rate than what they filed. When market conditions are not in the carriers’ favor, a lower GRI, or no GRI at all, is actually implemented. NVOs say carriers are telling them this year they expect to get some portion of the July 1 GRIs they filed.

BCOs say carriers are telling them US importers should also expect to pay a GRI for any shipments that exceed their weekly MQC. “They are very serious. We don’t like it, but we need the space,” a retailer told JOC.com Monday.

Another retailer told JOC.com his contracts specifically stipulate that carriers cannot impose GRIs or peak-season surcharges for all shipments under its MQC. When capacity is available, many carriers will honor the contract rate even for shipments above the MQC, he said. However, when capacity is tight, as it is now, the retailer must pay a GRI for any volume above the MQC, he said.

Rather than shop around for another carrier, the retailer said he is resigned to pay a GRI in today’s market. “If they can give us more space, and we can pay a rate less than the NVOs’ spot rate, we’ll ship with them,” he said.

Carriers, meanwhile, told JOC.com space on vessels leaving Asia is tight due to an unexpected surge in imports since late May, driven primarily by retailers replenishing their inventories and the reopening of businesses and manufacturing plants that had been closed because of the coronavirus disease 2019 (COVID-19).

“It’s about supply and demand. We’ve seen a lot of pent-up demand,” a carrier executive who asked not to be identified told JOC.com Monday.

Uffe Ostergaard, president of Hapag-Lloyd USA, said the carrier files a standard GRI every two weeks in order to provide flexibility to adjust to market conditions, so the carrier does not necessarily expect to achieve the full amount. However, current conditions point to a GRI going forward.

“We do see a good balance between supply and demand on the [eastbound trans-Pacific] at this point in time, providing good support for the spot rates,” he said.

GRIs imposed by the carriers in June are reflected in eastbound spot rates that have spiked despite a precipitous drop in volumes amid the COVID-19 crisis. As of June 26, spot pricing from China to the US West Coast had risen to $2,692 per FEU, a 10-year high and a 94.8 percent increase from the same week last year, according to the Shanghai Containerized Freight Index (SCFI) published under the JOC Shipping & Logistics Pricing Hub, while rates to the East Coast jumped 37.4 percent year over year to $3,303 per FEU.

The combination of blank sailings and the increase in consumer demand this past month has had the greatest impact on spot rates in the Pacific Southwest services to Los Angeles-Long Beach. Space has been “very tight” on the PSW services, Monroe said.

In addition to replenishing inventories at the 1.8 billion square feet of industrial real estate space in Southern California, retailers and manufacturers are looking ahead to August when some of the tariff exclusions in the Phase One trade agreement between the US and China are set to expire. Given the uncertainty of US-China trade relations, importers are focusing on the Asia-Los Angeles routing, which is 10 days to two weeks faster than all-water services to the East Coast, in order to ensure that their products enter the country and clear US Customs in case the tariff exclusions are not extended.

Chang said retailers are fast-forwarding some consumer merchandise and moving that product to warehouses in Southern California for storage until it is needed. Some manufacturers, such as those in electronics, are bringing components in early and storing them in warehouses on either side of the US-Mexico border, he said.

Because vessel space has been tighter on the PSW services than on all-water services from Asia to the East Coast, the normal spread of $1,000 per FEU between the two coasts is now only $611, according to the SCFI.

Nevertheless, spot rates to both coasts are elevated. An NVO who asked not to be identified noted that the price of low-sulfur fuel that most vessels now burn is down 50 to 60 percent from the January peak, meaning that when the bunker component is removed from the all-inclusive rate, the transportation component is disproportionately high when compared with previous years.

“Take out the price of fuel, and the [spot] rate is probably the highest in history,” he said.

Carriers backing off from blank sailings

So far, carriers have announced only four blank sailings for July and August, according to Sea-Intelligence. “It is too early to say if this reflects a genuine market strength, or if the carriers simply haven’t gotten around to announcing for this period yet,” Alan Murphy, CEO of Sea-Intelligence, said in the firm’s most recent Sunday Spotlight newsletter.

NVOs contend that earlier this spring, when economic prospects looked discouraging, carriers overestimated how many blank sailings they needed in order to balance supply and demand. Carriers from early February through April blanked more than 150 sailings from Asia to North America, according to Sea-Intelligence. However, even as import volumes began to rise in May, carriers announced more than 75 blank sailings for May and June, although some previously announced blanked sailings were reinstated.

US imports from Asia through May are down 9.8 percent from the same period a year ago, according to IHS Markit, so increasing imports in the coming months may still not translate to a year-over-year boost in import volumes in the second half of 2020.

BCOs, NVOs, and carriers all agree that container volumes — and pricing — for July and August remain uncertain. Some states that reopened their economies in May are beginning to close down certain sectors due to a spike in COVID-19 cases.

However, Rolf Habben Jansen, CEO of Hapag-Lloyd, told JOC Uncharted he is starting to see encouraging signs of a recovery in the major east-west trades.

“We are experiencing a slow recovery into Q3 and a little bit more in Q4. I certainly see more encouraging signs today than four or six weeks ago,” he said.