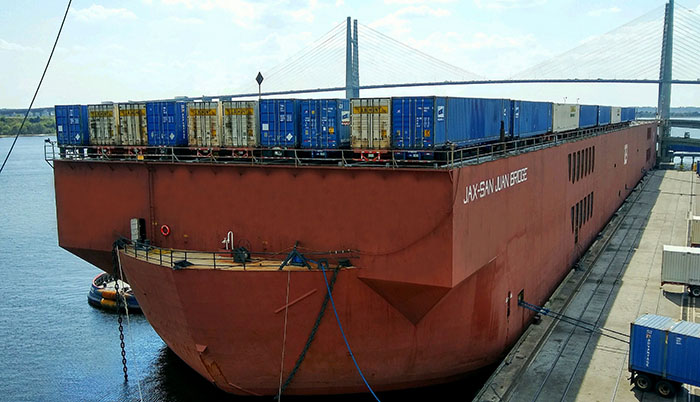 Trailer Bridge will soon be the sole operator of barges on the US-Puerto Rico trade.

Trailer Bridge is developing a new niche with 53-foot containers on a twice-weekly service to Santo Domingo, Dominican Republic, while weathering a difficult US mainland-Puerto Rico market.

The Santo Domingo service was launched six months ago. It uses space on a ferry service that Priority Ro-Ro operates between the Dominican port and San Juan, which Trailer Bridge has served from Jacksonville, Florida, since the company was founded in 1991.

Primary containerized cargoes from the Dominican Republic to the United States include lightweight shipments such as apparel, which can fill a 53-foot highway trailer without exceeding road weight limits. When these cargoes move in regular ocean containers, they typically must be transloaded into higher-capacity 53-foot highway trailers.

“With our 53-footers, we can move a customer’s cargo straight to the door, in the same box. The customers love it,” Trailer Bridge CEO Mitch Luciano told JOC.com.

Luciano said Trailer Bridge is the only carrier operating 53-foot containers in the Dominican trade. He said the company moves northbound shipments from the Dominican Republic to US points as far inland as the Midwest and West Coast. Many of these shipments use Trailer Bridge’s longstanding exclusive partnership with motor carrier JB Hunt Transport.

The Santo Domingo service is in addition to Trailer Bridge’s longstanding service to Puerto Plata, on the Dominican Republic’s north coast. The Puerto Plata service uses Trailer Bridge barges on an extension of the carrier’s core Jacksonville-San Juan route.

The US mainland-Puerto Rico trade has been in flux during the last several years. Horizon Lines went bankrupt and exited the Puerto Rico tradeat the end of 2014 after a price-fixing scandal that also involved Sea Star Line (now TOTE Maritime), and Crowley Maritime.

Trailer Bridge, the trade’s smallest carrier, was not involved in the scandal but filed for bankruptcy and later was bought by its current owner, the diversified maritime operator Seacor Holdings.

Puerto Rico’s fiscal problems and long-depressed economy have added to carriers’ difficulties in a heavily imbalanced trade where southbound shipments far exceed northbound cargoes to the US mainland.

Luciano and Thomas B. Crowley Jr., chairman and CEO of Crowley Maritime, speaking at the annual Jaxport Intermodal and Logistics Conference in Jacksonville, said they’re hoping for better days in the Puerto Rico trade.

“We have a lot of positive things going forward, and I think Puerto Rico has hit bottom,” Luciano told the conference. However, he said recovery will take time. “Anyone that is looking for results in 2017 or 2018 is deceiving themselves. It’s going to be 2019 or 2020.”

During the next two years, Crowley will replace triple-deck towed barges with new ships that will be fueled by clean-burning liquefied natural gas (LNG) and will handle a variety of container sizes up to 53 feet. The new con-ro ships will carry up to 2,400 twenty-foot-equivalent units (TEUs) of containers and nearly 400 cars.

TOTE last year introduced two LNG-powered ships that carry up to 3,100 TEUs. The new vessels replaced 1970s-vintage ships including El Faro, which sank with the loss of 33 seafarers when it encountered a hurricane on a Jacksonville-San Juan voyage in 2015.

Crowley is investing $550 million in new ships; an expanded terminal in San Juan, including three new gantry cranes; and an LNG bunkering station in Jacksonville.

“The investments that both TOTE and Crowley are making in LNG-powered vessels and the delivery system of that LNG is unprecedented anywhere in the world,” Thomas Crowley told the Jacksonville conference.

“I think it’s really exciting, and I think it’s the beginning of the supply of LNG throughout the Caribbean basin. We plan to be a leader in that market.” He said Crowley believes LNG is “the future of shipping.”

When Crowley takes delivery of its new ships, Trailer Bridge will be the only carrier in the trade operating towed barges, which have a six-day Jacksonville-San Juan transit time that’s about twice that of ships.

Luciano said he sees this as an advantage. He said some shippers prefer the slower transit times — and lower costs — of barge service because it fits their supply chains. Some Puerto Rico warehouses have limited space, he said, and prefer to use barges as “a warehouse on water for an extra three days.”