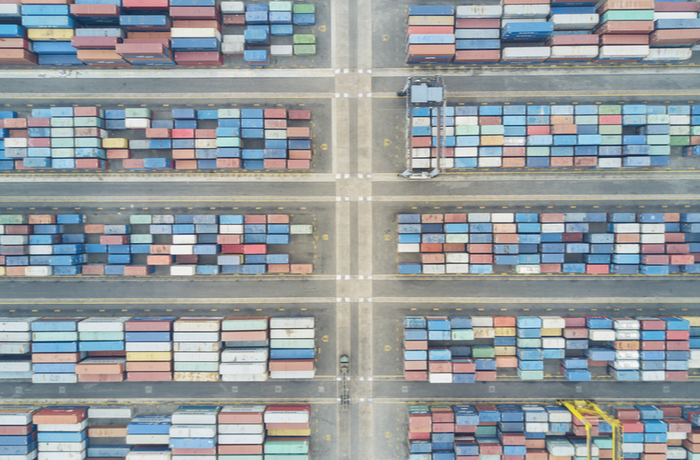 Cargo has been steadily building up in warehouses, port terminals, and inland depots during the lockdowns, according to forwarder association FIATA and insurer TT Club. Photo credit: Shutterstock.com.

Forwarders and insurers warn that cargo flows are becoming more uneven across key markets as a natural container imbalance on headhaul and backhaul trades is exacerbated by extensive blank sailings from carriers trying to match capacity with declining demand.

Stay-at-home orders and the closure of most retail outlets across Europe and North America since early March to limit the spread of the coronavirus disease 2019 (COVID-19) has erased consumer demand and stopped manufacturing in many parts of the world. But cargo has been steadily building up in warehouses, port terminals, and inland depots during the lockdowns, according to forwarder association FIATA and insurer TT Club.

“These are primarily non-essential products, for which there is little demand as retail outlets are closed or supplies for production lines that are either static or at reduced capacity,” TT Club noted in a statement this week.

The insurer said 90 percent of the UK warehousing capacity was full, with the UK Warehousing Association (UKWA) forecasting that all available space will be gone in two weeks. TT Club gave as an example a UK high-street fashion retailer that had been forced to lease 40 percent more storage than normal to accommodate the arrival of products it would be unable to sell.

Some of the major carriers are offering “Delay in Transit” options that allow shippers to store import containers at transshipment hubs as cargo owners adjust supply chains in response to the coronavirus. These include CMA CGM and Mediterranean Shipping Co., which this week announced it was expanding its “Suspension of Transit” (SOT) offering by adding four more transshipment hubs where cargo owners can store cargo outside the marine terminal. Maersk Line is offering storage at origin ports in Asia, where goods can be quickly loaded once demand returns.

Europe’s hub ports appear to be more affected by an accumulation of cargo than those in North America, where the ports no longer anticipate equipment dislocations, such as they feared would take place in the first quarter when terminals were struggling to return empty containers to Asia.

Detlef Trefzger, CEO of Kuehne + Nagel, told JOC.com this week after announcing the forwarder’s first quarter earnings that all the cargo that left China in March after factories reopened arrived in Europe by mid-April.

“The challenge for our customers is what to do with the stuff. Does it go into an inbound warehouse, does it go into merchandise?” he said.

Either way, the containers will not be emptied and returned to service anytime soon, worsening a container imbalance that has existed on the Asia-Europe trade to one degree or another, FIATA highlighted in a position paper this week.

The forwarder association said container imbalances have been a perennial issue in the global supply chain, with increasing vessel sizes over the past decade, consolidation, and the emergence of three alliances leading to higher peaks in container terminals and land-side infrastructure.

But also inherent in the global nature of the world’s supply chains was the impact of major regional holidays, especially Chinese New Year when factories are closed for up to three weeks.

“In the current environment, these imbalances are exacerbated by shipping lines employing substantial numbers of blank sailings to adjust supply, which impact the availability of containers for backhaul export shipments in the importing countries,” the FIATA paper noted.

“Congested terminals, temporary storage, abandoned cargo — these constitute just some of the major problems facing the global supply chain today,” it added. “Based on the current economic positions, it seems the global maritime supply chain is in for stormy weather in the months to come.”

A recent survey by the International Association of Ports and Harbors (IAPH) shows a mixed picture at ports around the world, with 35 percent reporting an increase in the utilization of warehousing and distribution facilities for foodstuffs and medical supplies, with some ports reporting capacity shortages.

The uneven impact on cargo flows can be seen in different verticals and geographies. For instance, auto industry shipments have fallen off and Indian export cargo has come to a near standstill, whereas Latin American markets have so far been largely uninterrupted.

“I think it’s very difficult to really draw from any historical experience on this situation because it’s such a global impact,” said Uffe Ostergaard, president of Hapag-Lloyd America. “Different markets are dealing with it differently, and we also see big variation in how different industry segments are impacted and deal with the crisis.”

“China has come back up, but then other Asian markets have come down, and [demand] moves in different ways and makes it harder to manage,” he added.

Ostergaard told JOC.com that carriers had to be able to make rapid changes in the network design to be prepared when demand improves, something that has been on display with the extensive blank sailing programs of the alliances.

“Our approach is to be cautious in terms of capacity allocation and if for some reason the market comes back stronger than we expect, great, and then maybe we lose out a little bit, but we don’t put cost into something we don’t know will have a return,” he said.