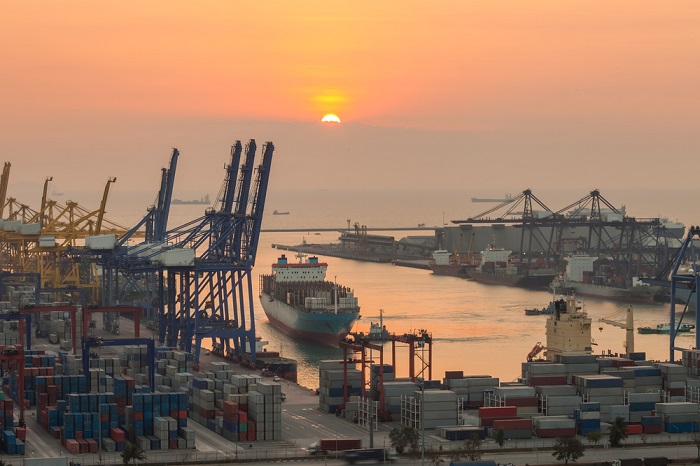 The World Shipping Council, representing container carriers, took immediate issue with the ITF report in its references to the major alliances, saying, “The EU block exemption simply does not apply to these arrangements in most cases.” (Above: Rotterdam port at sunrise.) Photo credit: Shutterstock.com.

Container shipping has been gradually deregulated over the years to the point where pricing today reacts seamlessly to changes in supply and demand. The collective activities of carriers on the operating side — engaging in vessel-sharing agreements (VSAs) — were allowed to continue by government regulation. That could soon change.

It was not a big deal by itself when the European Commission announced in September that it was “inviting comments on the legal framework exempting liner shipping consortia from EU antitrust rules that prohibit anti-competitive agreements between companies.” The rule allowing consortia in European trades expires on April 25, 2020, and just as it did when expiring in earlier occasions going back to the mid-1990s, it would be customary for Brussels to solicit comments on the renewal.

The difference now in terms of factors that Brussels will consider is how significantly the use of consortia by carriers has expanded in the past 10 years, with consortia dominating the east-west trades to a much greater extent than in the past.

“If we go back 10 years, you had 20 carriers with 70 percent of the market and the top three carriers not engaged in alliances of any kind,” said Mary Brooks, a specialist on liner competition policy and professor emeritus at Dalhousie University in Halifax. “You go forward to today, and you have three big alliances, all of which have a large share, and all of the top carriers are in alliances. It is a huge change.”

In a study published on Nov. 2 that called for the elimination of the consortia antitrust exemption, the International Transport Forum (ITF) of the OECD pointed out the expanded use of consortia by container carriers, saying they were responsible for the proliferation of mega-ships that have imposed burdens on ports and slowed down shipper supply chains: “Whereas the early generations of global alliances that emerged in the mid-1990s provided a vehicle for cooperation between smaller carriers, alliances are nowadays cooperation tools for the largest container lines — the three global alliances (2M, Ocean, and THE Alliance) that are operational since the April 2017 regroup of the eight largest container carriers of the world. These three alliances represent around 80 percent of overall container trade and operate around 95 percent of the total ship capacity on east-west trade lanes where the major containerized flows occur.”

In a recent podcast with SupplyChainBrain, Brooks said, “The more the alliances consolidate, the more they draw the attention of the competition authorities looking at what point this [will] end up with one carrier or two carriers dominating the market and then being able to extract a much heftier price out of the shipper. And so I think we must be getting awfully close to that relook at what the alliances mean in terms of an adequate supply of choice to the shipper.”

The World Shipping Council, representing container carriers, took immediate issue with the ITF report in its references to the major alliances, saying, “The EU block exemption simply does not apply to these arrangements in most cases.”

If consortia were disallowed, likely forcing a breakup of the existing alliances in the Europe-Asia, trans-Atlantic, and other European trades, what impact would that have? If nothing else, it would re-establish differentiation among carriers now seen as providing commoditized services, in large part because a shipper’s cargo is often carried by a carrier other than the one with which the shipper booked. The carrier may offer a near-daily departure from a key loading port, but because of alliances, virtually all carriers have a similar offering, which naturally leads to price versus service as being the primarily focus of the shipper-carrier relationship.

If carriers deployed their own strings of ships, they could compete on the basis of on-time arrival and other attributes of service that would be entirely within the control of the carrier, as opposed to the carrier being forced to outsource key aspects of service to its alliance partners.

This actually seems to line up with where carriers themselves want to go. Following the mergers, acquisitions, or bankruptcy during the past few years that have reduced the number of independent east-west carriers from 20 to 10, the remaining carriers have been talking more openly about service differentiation.

Some are taking active steps in this direction, such as Maersk declaring itself to be a global integrator of container logistics and CMA CGM taking a large stake in CEVA Logistics.

But that said, it would be a huge leap to say that carriers would be comfortable with a sunsetting of the regulation allowing consortia. Favorable economics resulting from sharing vessels has driven carriers to engage in such agreements since the early days of containerization, despite the frustration of having to develop schedules and port calls collectively versus having full control.

Without consortia allowed in a major trade such as Asia-Europe, those economics would disappear and carriers would arguably be more vulnerable to a volatile market. In addition, if they weren’t able to survive, shipper choice would be further reduced, defeating the purpose of ending the rule whose goal would be to protect shipper choice, not reduce it.

Permalink Submitted by ferrullig@minds... on Nov 16, 2018 7:13PM EST
European shippers better take a very close look at what happens to their services if Alliances go away. Who has the vessels for a global service - less than ten carriers. Who has the number of required ulcc container ships to have a low cost operation. Maybe 3 carriers. Would services improve - only if the carriers make money in the market, and they haven't for 7 of the last 8 years. To make money they have to charge rates that reflect the cost plus a reasonable return on investment - they haven't done that and eliminating alliances won't be the solution, raising rates to cost plus will. Then let's hear the outcries.

No one wants to create

Permalink Submitted by hharalambides@h... on Nov 19, 2018 8:08AM EST
No one wants to create hardship to one of our most crucial of industries. But carriers have gone a step too far with 'capacity management' and 'investment planning' and that wasn't very smart. The 2020 review of the consortia regulation is going to be tough on them and they'd better be better prepared for this than what they were 13 years ago when shippers and the European Commission killed liner shipping conferences. The "Erasmus Report" has documented all this in nauseating detail, as it will do this time too (in the link below a recent article in my blog). http://haralambides-mel.blogspot.com/2018/11/the-impact-of-alliances-on-container_40.html

Solving for Uncertainty: A Guide to Variable Transportation Budgets
END_OF_DOCUMENT_TOKEN_TO_BE_REPLACED