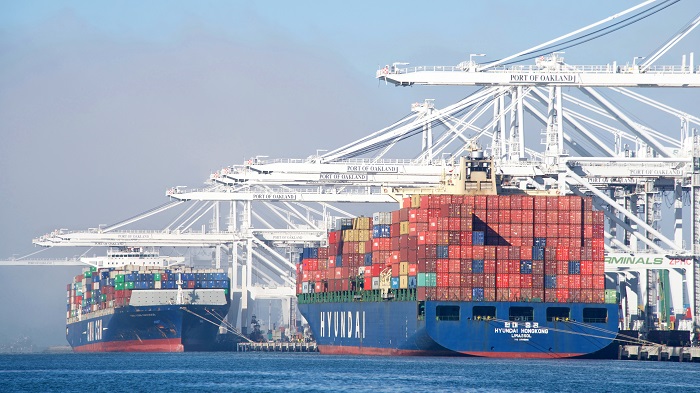 In global trade, a decentralized environment, where all parties involved in the movement of a container could interact, has been both the perfect solution and completely unachievable until now. Photo credit: Shutterstock.

As container shipping has consolidated from 18 east-west carriers down to 11 during the past two years, it is easy to say the industry is experiencing an inflection point and will look very different in the future.

The industry may look different, but that will be due to a revolution in technology, not to consolidation; the evidence so far is that consolidation has reduced the number of carriers but has not changed behaviors.

There is no evidence, for example, that markets are any less competitive. Carriers have returned to mega-ship ordering after a brief hiatus, and, as consultancy McKinsey controversially said in a recent white paper (that it quickly withdrew), overcapacity “is here to stay.”

Blockchain — the next, big thing?

But by stroke of historical luck, simultaneous to consolidation has come what some believe to be the next world-changing technology breakthrough, which is distributed ledgers or blockchain. Although it is yet to happen and may take years to implement, for the first time it is possible to envision a path to significant reductions in the staggering costs associated with global trade.

That is because the concept of distributed ledgers can create the necessary level of trust — that is a big statement — among the dozens of individual parties that must interact as trade flows from origin to destination. It allows that interaction to occur with a collaborative Cloud-based environment not owned or controlled by any central party, but “owned by everyone and no one,” as has often been said of the decentralized system underlying bitcoin.

A decentralized environment, where all parties involved in the movement of a container could interact, has been both the perfect solution and completely unachievable until now. None of the technology developed and deployed over decades — whether mainframes, email, electronic data interchange, the Cloud, transportation management systems, the internet, artificial intelligence, Internet of Things, etc. — has created the collaborative environment the industry requires above all other solutions. The potential elimination of cost is so great — Maersk and IBM said in January that documentation costs alone amount to 20 percent of the cost of actual shipping — that despite the lack of progress, there remains an insatiable hunger to see such a system implemented if it can be done right.

“Our desire is to get to a point where we’re all using the same platform,” George Goldman, the US president of Zim Integrated Shipping Services Co., said at the Georgia Foreign Trade Conference in early February.

“As an industry, we need to spend some time from a collaboration standpoint and really develop, for the good of the industry and to gain efficiencies, a common platform,” Greg Tuthill, chief operating officer of CMA CGM (Americas) LLC, said at the Georgia event.

The requirement for the common platform: neutrality

Getting it done right is the challenge, and the key to that is neutrality. Unless the envisioned platform is truly neutral, with intermediaries able to profit from creating so-called on-ramps and off-ramps but no centralized authority controlling the platform itself, this is sadly a non-starter.

“We’re all sort of getting there separately now with different joint ventures [JVs], but my hope would be that we get to a point where we’re all using the same system,” Goldman said. Zim is collaborating with Wave, an Israeli startup, on a blockchain solution to digitizing bills of lading. (This will be presented at TPM 2018 on Monday afternoon.)

A key question is whether the holy grail system will be the one to be created by a JV of Maersk and IBM, which in January announced plans to create a “global trade digitization platform built on open standards and designed for use by the entire global shipping ecosystem.”

Speaking to the key issue of neutrality, former Maersk US president Mike White, who will lead the JV, said at the Georgia event, “Our intent and aspiration is to have a completely open, neutral platform. We think that is critical.”

Without question, achieving neutrality and resulting buy-in will be the difference between the industry being able to seize this unique opportunity or not. The prize is so big that it is imperative that individual carriers see participation in a common platform as non-competitive. If just a narrow slice of the industry joins the environment, they may succeed in reducing some costs, but the overall result will be elimination of only a fraction of the costs that would be possible through universal adoption by carriers, forwarders, shippers, ports, and government agencies. The large number of initial coin offerings in shipping is already pointing to a siloed future.

That is why this moment is so critical. Technology in shipping today is siloed, and the results are there for all to see: marginal, incremental, and unsatisfying levels of value achieved over decades.

“The transport and logistics industry has not yet undergone any significant transformation,” Maersk Group chairman Jim Hagemann Snabe wrote in February.

How many times has it been said that nothing has changed since Malcom McLean’s introduction of the container in the late 1950s? It is time that the industry that revolutionized global trade more than 50 years ago do it all over again.

Am I the only person who sees

Permalink Submitted by usmma73@gmail.com on Feb 27, 2018 11:14AM EST
Am I the only person who sees the irony in the reality that the companies espousing a so-called neutral platform are the same ones who have had a strategy of increasing their cargo market shares and shares of worldwide vessel capacity to the exclusion of other carriers, thus creating the consolidation activities we are seeing and will continue to see? These are the same companies who created the supply and demand imbalances they have suffered from by continuing to bring on line bigger ships. And, in addition, they are mostly the same companies who have stopped offering any degree of service differentiation which has led to shipping becoming a commoditized industry, and passing on the responsibility for customer service to third parties such as forwarders. It is not coincidental that most of their discussion around digitization is about a reduction of their own operating expenses, not about improved customer service. Meanwhile, the industry's on-time vessel reliability is the worst it has ever been. All of these shipping executives need to take a look at what their customers need by talking to the BCO's instead of going back to the old approach of telling shippers what they need, digital or otherwise.
Maritime News›Container Lines
International Logistics›Logistics Providers
Port News›Port Productivity
Technology
Africa
Asia
Europe
Middle East
North America
North America›United States
South America