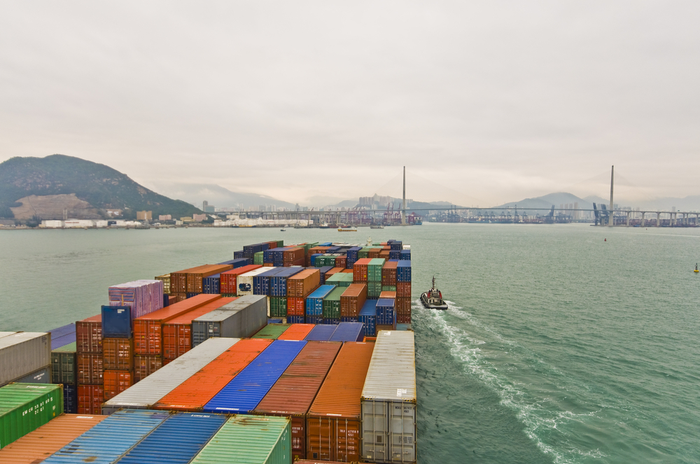 Beneficial cargo owners and carriers anticipate imports from Asia this year will be down sharply from the 15.5 percent increase in the fourth quarter of 2018; carriers appear determined to prop up spot rates through strict capacity management. Photo credit: Shutterstock.com.

With trans-Pacific eastbound spot rates falling for a third straight week, China imports declining, and time running out for a beat-the-tariff import surge, container lines have only one option to prevent the loss of peak season gains: more blank sailings.

Container lines have already announced three blank sailings for June. A blank sailing occurs when a carrier or a vessel-sharing alliance cancels a regularly scheduled weekly sailing, something they did with regularity last year during slack periods. Carriers demonstrated earlier this year that pulling capacity when cargo volumes soften was still in their playbook as they blanked 35 sailings in February and March in the trans-Pacific.

“We expect an uptick in voided sailings in July, and a further uptick in August,” Blake Shumate, COO at American Global Logistics, said Friday.

Containerized imports from China have already dropped 6 percent through April, according to PIERS, a JOC.com sister company within IHS Markit. Further declines are likely because of the ongoing US-China trade war that began in the summer of 2018 with the Trump administration’s announcement of 10 percent tariffs on imports from China.  Additional tariffs of 25 percent followed earlier this year. The next round of tariffs on the remaining $300 billion of imports from China is likely to take effect later this summer unless next week’s meeting between US President Donald Trump and President Xi Jinping of China at the G 20 summit in Tokyo can put an end to the trade war.

However, as the eastbound Pacific prepares to enter the summer-fall peak season, carriers are keeping their options open for rate increases by giving the required 30-day notice for planned general rate increases. Hapag-Lloyd, for example, announced this week a GRI of $480 per TEU and $600 per FEU effective July 20. It is common for carriers to announce GRIs at this time of year, although coming so early in the season, carriers normally don’t achieve the full rate increase that they post.

In addition to managing capacity with planned blank sailings, the likelihood of ad-hoc blank sailings in the fourth quarter is emerging as carriers drydock vessels for about a week to flush high-sulfur fuel from the tanks and refill them with low-sulfur bunkers ahead of the Jan. 1, 2020 deadline for global implementation of the International Maritime Organization’s low-sulfur fuel requirement.

Although both beneficial cargo owners (BCOs) and carriers anticipate imports this year will be down significantly from the 15.5 percent increase in imports from Asia in the fourth quarter of 2018, carriers appear determined to prop up spot rates through strict capacity management.

In the June 16 Sea-Intelligence Sunday Spotlight, Alan Murphy, co-founder and CEO of Sea-Intelligence, said spot rate erosion in the eastbound trans-Pacific has continued rather steadily since the Shanghai Containerized Freight Index (SCFI) peaked on Nov. 2, 2018 at $2,606 per FEU to the West Coast and $3,739 per FEU on Nov. 16 to the East Coast. The SCFI, which is published in the JOC.com Shipping and Logistics Pricing Hub, on Friday listed the West Coast spot rate at $1,382 per FEU, down 2.4 percent from last week, and the East Coast rate at $2,404 per FEU, also down 2.4 percent.

Spot rates in the past almost always increased during the August-October peak season, so the forecast of softening imports in the second half of the year leaves carriers with only one option to avoid a sharp decline in freight rates — managing capacity, Murphy said. “If the current erosion levels continue, any gains in the peak season would be lost in a matter of weeks,” he said.

Commenting on the likelihood of more tariffs, Eytan Buchman, CMO of Freightos, stated in Tuesday’s newsletter that “US Secretary of Commerce Wilbur Ross said the administration would be ‘perfectly happy’ to apply tariffs on remaining untaxed Chinese imports.”

In letters to US Trade Representative Robert Lighthizer, West Coast port directors said the tariffs already in effect, and the uncertainties surrounding a further round of tariffs, are devastating to the imports and exports at their gateways, which are tightly linked with China.

Gene Seroka, executive director of the Port of Los Angeles, said the Los Angeles-Long Beach gateway handles close to 40 percent of US containerized imports, and China is by far the largest source, representing about 64 percent of the gateway’s imports by TEU volume. China accounts for more than one-third of Oakland’s containerized imports and exports, said Chris Lytle, executive director of the Port of Oakland. Both importers and exporters in Northern California say the tariffs and threat of additional tariffs are playing havoc with their international supply chains, he said.

Importers are already shifting whatever production they can from China to factories in Vietnam and other Southeast Asian countries, but “repositioning of manufacturing will take time,” Shumate said. Additionally, carriers are indicating their preparedness to increase vessel strings from Southeast Asia to the US, but time is running out. Back-to-school merchandise is already beginning to enter the country so that it will be on store shelves by early August, he said.

Shumate said that although peak season holiday merchandise has not yet begun to move, it has been difficult getting accurate forecasts from BCOs about their “desired” production schedules in Asia and their “true” production schedules. This makes peak-season forecasting in terms of actual volumes, and source countries, difficult to ascertain, he said.

Fast-forwarding peak-season shipments also involves choosing a US gateway either on the West Coast or East Coast, as well as warehouses needed to hold the merchandise until it is ready to be shipped to stores, Shumate noted. Warehouses in Southern California are already beginning to fill up, so importers are looking to nearby states for storing merchandise destined for the West. Importers in the eastern half of the country are looking more closely at warehouses in the Midwest, which can be reached either through West Coast or East Coast ports, he said.

While these uncertainties are causing headaches for the logistics managers at retailers and manufacturers, carriers appear to be in the driver’s seat when it comes to ensuring that a disappointing peak season in terms of cargo volume does not translate to a further erosion of freight rates. Carriers learned their lesson well last fall and earlier this year, Murphy stated.

“Carriers culled significant amounts of capacity in 2018-Q4 and 2019-Q1, with near historical highs [if not the highest] number of blank sailings in the last quarter of 2018,” he said.

Carriers will have yet another option for managing capacity in the fourth quarter when it comes time to take vessels out of service ahead of the shift to low-sulfur fuel. A planned one week out-of-service time for the transition could easily extend to two weeks. If import volumes weaken in the fourth quarter, “why wouldn’t they?” extend the layup period, Shumate said.