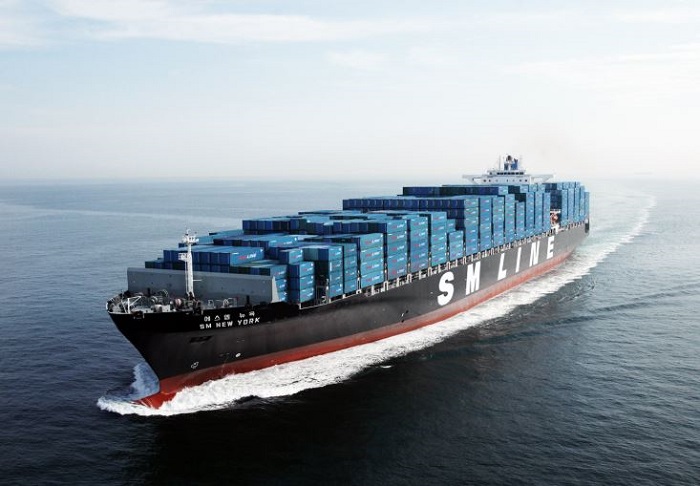 SM Line said growing volume in the second half of the year should return rates to a level that covers operation costs. Photo credit: SM Line.

Rejecting rumors that it plans to cut or entirely scrap its trans-Pacific services, SM Line said it’s maintained solid vessel utilization rates of about 90 percent in the eastbound Pacific even though its laden import volume on a quarter-to-quarter basis has fallen sharper than the market. SM Line said growing volume in the second half of the year should return rates to a level that covers operation costs.

SM Line, which began trans-Pacific service in April 2017, saw its import volume fall 16.1 percent in the first quarter compared with the fourth quarter, while total US imports in the same period slipped 2.8 percent to 5.7 million TEU, according to PIERS, a sister product of JOC.com. From the fourth quarter to the first quarter, SM Line’s exports fell 5 percent to 19,822 TEU, while US exports fell 4.6 percent to 3.2 million TEU. In terms of total Asia-US trade, SM Line had the biggest quarter-to-quarter drop among the Top 15 carriers, with 11.8 percent to 81,758 TEU.

At least two shippers told JOC.com they believed SM Line could pull out of the trans-Pacific after only one year in the trade.The rumors could also have originated with carriers who seek the carrier’s business with non-vessel operating common carriers (NVOCCs). Mark Lee, vice president and managing director of the Americas, said SM Line has contracts with both NVOCCs and with direct shippers.

Lee said SM Line is not impacting rates in the competitive eastbound Pacific. “The rates are the rates,” he said Tuesday. SM Line is a “small player” and by itself cannot influence the rate level in the largest US trade lane. However, a strong peak season this autumn, which is starting to look more likely, should return most carriers to profitability.

SM Line replaced South Korean carrier Hanjin Shipping Co. after its bankruptcy on Aug. 31, 2016. It launched its first trans-Pacific service last year from North Asia to Long Beach, a weekly service with 6,500-TEU ships that calls at SSA Marine’s Pier A terminal. SM Line does 100 percent discharge and reload of the vessels in Long Beach, and they return directly to Asia.

On May 11, SM Line launched a Pacific Northwest service linking North Asia with Vancouver and Seattle. Those vessels have a capacity of 4,500 TEU. SM Lines is an independent carrier and is not a member of the three global carrier alliances.

US imports in the first quarter increased 7.8 percent year over year, according to PIERS, but capacity continues to exceed demand, thereby putting a lid on carrier rate hikes. Alphaliner projects import demand this year will increase 5 to 6 percent, with capacity projected to grow 8 to 9 percent.

Nevertheless, most of the new capacity this year will have entered into the trade by the end of July, according to SeaIntel Maritime Consulting. Lee expects containerized imports will grow strongly in late summer and autumn, pushing utilization rates closer to capacity and enabling SM Line and other carriers to achieve rates “at sustainable levels.”

The spot rate last week from Shanghai to the West Coast was $1,358 per FEU, an increase of 6.3 percent from the same week last year, and $2,354 per FEU to the East Coast, up 5.4 percent year over year, according to the Shanghai Containerized Freight Index published in the JOC Shipping & Logistics Pricing Hub. Some carriers announced peak-season surcharges (PSSs) effective July 1. Although PSSs this early in the summer often do not gain traction, continued year-over-year increases in the spot rate could translate to general rate increases or PSSs in late summer or autumn.

While the spot rates this summer are trending higher than last year, the service contract rates that were negotiated in May by most accounts ended up slightly lower than last year. Except for the largest retailers, service contracts in the eastbound Pacific to the West Coast were about $1,100 to $1,200 per FEU, compared with $1,200 to $1,300 last year. East Coast rates were about $2,100, compared with about $2,200 to $2,300 last year.

SM Line’s missing link in the US trades is an all-water service to the East Coast. Lee said no new services are planned for the first half of this year, but the carrier will reassess its plans in the second half.