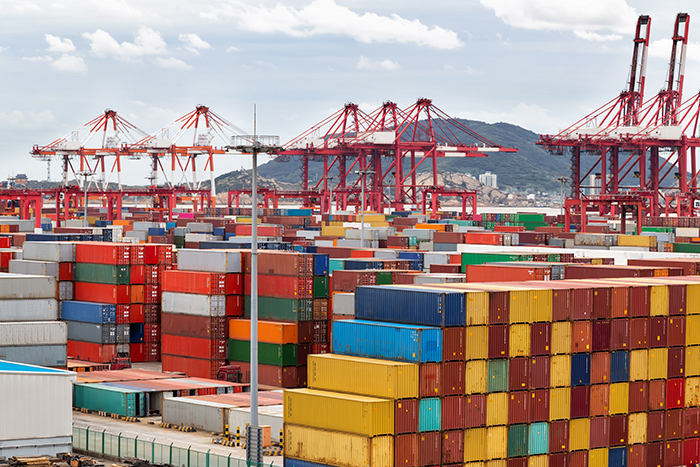 Container volume growth tends to outpace the expansion of the value of trade by 1 to 2 percentage points, but both are flattening. Photo credit: Shutterstock.com.

It’s hardly a five-alarm fire and more of a slow-burn, but a new pressure on the container shipping industry is solidifying: slowing global trade with no end in sight.

The World Trade Organization (WTO) on April 2 downgraded its 2019 outlook for world trade growth to 2.6 percent from a 3 percent clip in 2018; global manufacturing is weakening; and there’s little sense that rising protectionism will recede. Granted, container volume growth tends to outpace the expansion of the value of trade by 1 to 2 percentage points, but both are flattening. Container trade will grow 5.4 percent this year and 4 to 5.1 percent in the medium term, according to IHS Markit’s Shipping and Shipbuilding 2019 outlook.

Noting that the range of growth is a major change compared with the early 2000s when growth rates cleared double digits, Dalibor Gogic, the report’s author, said, “We must accept that globalization appears to have worked its way through the global sourcing system and that we are now back to depending on straightforward demand.”

In a catchier turn of phrase, Adjiedj Bakas, a so-called futurologist and author, has dubbed the new era “slowbalization.”

The regionalization of trade parallels and is intertwined with a slowing global economy. The International Monetary Fund predicts for 2019 the slowest global economic expansion since 2016, at 3.3 percent. Global production in March stalled like it did in February, recording the weakest level since mid-2016 on the J.P. Morgan Global Manufacturing Index.

Global trade will accelerate to 3 percent growth in 2020, according to the WTO, hinging its brighter outlook on “an easing of the trade tensions.” But even if the US and China reach a truce, as the latest bubbling of optimism suggests, the global mood of protectionism won’t change course easily or soon.

Although much has been made about what the slowing value of trade means for cross-border trade and the shift of trade agreements from multilateral to bilateral, the impact of container shipping has yet to be fully explored, much less realized. But there are signs of an industry — whether conscious or not — shifting into a new landscape of mild to moderate growth.

Maersk’s and CMA CGM’s efforts to evolve into integrators, along with the most concerted push by container lines as a whole to deepen their reach via technology and landside operations, is evidence of this. With slower freight growth ahead, carriers want a larger part of whatever revenue might be available.

In this new era of trade, volume growth may slow globally, but regional trade growth is set to accelerate, most notably in intra-Asia. Seeing the writing on the wall and the healthier margins regional services can deliver, major global container lines have been acquiring regional lines — whether it be Maersk’s acquisition of Hamburg Sud and Sealand, or CMA CGM’s purchase of Containerships.

Container lines’ efforts to deepen their reach into the supply chain is something forwarders such as DB Schenker are watching closely. “From a forwarder perspective, we have amplified our efforts to add value via flexibility, reliability and technology,” said Jeffery Barrie, CEO, USA, for DB Schenker. Just as carriers look to add value, he said other asset providers in the supply chain are doing the same and considering more “what’s in those containers, and is there value-add potential?”