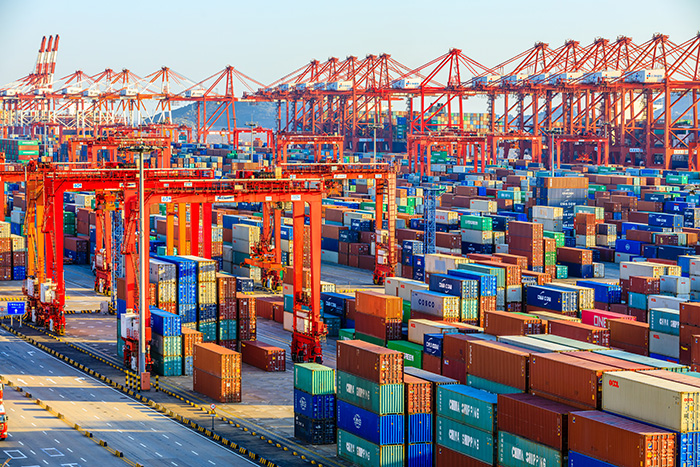 Slower circulation of containers, rather than inadequate vessel capacity, is what has brought the global container system to its knees. The pandemic-driven slowdown in normal circulatory movement of containers, combined with sharply higher volumes, has reduced overall system capacity, driving up rates and creating massive delays that are expected to continue for weeks to come.

The situation is akin to a slow steaming of containers themselves. When container lines en masse slowed their ships by several knots just prior to the financial crisis of 2008, it had the effect of lowering their fuel costs but also of reducing overall vessel capacity, mitigating what at the time was rampant overcapacity.

But because the slowdown in container circulation is due to multiple factors, including reduced labor productivity at warehouses and at marine terminals, “there are no silver bullets,” said veteran logistics consultant Gary Ferrulli. “It will take time, similar to previous labor disruptions, to clear the backlogs.”

The combined impact of reduced labor productivity and strong, sustained volume growth is clogging factories at origin and warehouses at destination, all of which contributes to the same bottom-line problem: reduced utilization of the container fleet overall. In other words, just when the system needed more capacity, the reduced circulation of containers led to less of it, and until normal container flow is restored fully, this will be a continuing drag on overall system capacity.

The issue is not, as has been reported by some, a shortage of new equipment; last year the industry added about 2.8 million TEU of dry containers, within the 10-year average but heavily weighted to deliveries in the second half due to the effects of the COVID-19 pandemic on China early in the year. The industry added just about 300,000 TEU of reefer equipment, which was also approximately within the 10-year average, sources tell JOC.com.

“There is no shortage of dry containers, just exceedingly slow velocity. Network flow is congested, units are out of place,” said one senior carrier executive. “Given congestion and delays in network flows, equipment velocity is most certainly down, thus exacerbating shortages or the appearance of shortages.”

How severe the hit has been to container utilization over the last several months is open to debate. Typically, a dry container is used six times per year and a reefer four times per year on east–west routes, with containers being used more frequently on short-sea services.

“I don’t have a good sense about how much lower this may be over the last year, but we do hear that numerous inefficiencies are slowing container velocities down and contributing to the container shortage,” said Brian Sondey, chief executive of Triton International, the largest container lessor.

One carrier said the landside delays have been so severe that utilization of its container fleet was reduced by half. Hapag-Lloyd CEO Rolf Habben Jansen, however, told JOC.com the Hamburg-based line’s container utilization “is certainly down, but not 50 percent or anywhere near that.”

Habben Jansen said Hapag-Lloyd’s utilization was down around 10 percent on average in the fourth quarter of last year. “Ten to 20 percent does not sound like a lot, but it effectively means you need 10 to 20 percent more boxes — in our case approximately 250,000 to 350,000 TEU — to carry the same amount of cargo. The additional boxes need to be built, and that takes time, and thus, the shortage cannot be fixed quickly,” he said, noting that there are “very few box manufacturers left.”

That indicates a regional disparity in container availability, meaning the issue is more pronounced on certain heavily congested trade lanes such as the trans-Pacific, a view that industry analyst Drewry shares.

According to Martin Dixon, head of research products for Drewry, across global deep-sea trades — i.e., long-haul and regional trades combined — a container undertakes five to six laden moves a year on average. In the fourth quarter of 2020, the annual average stood at 5.7 laden moves, “so not unusually high by historical standards,” Dixon told JOC.com.

“But as we know, on particular trades and geographies, container utilization has been much lower due to much longer cycle times,” he said. “So while average cycle times across the global fleet have been around the norm of 65 days, we know from anecdotal reports that trans-Pacific cycle times, for example, have been well in excess of 100 days. [Thus] on certain trades, equipment availability has become the principal capacity constraint.”

The interconnected nature of container flows means that many containers caught up in the US were intended to be relocated to Europe and either won’t make it there or will do so weeks behind schedule, impacting Europe trades as well.

There is a light at the end of the tunnel, but as of mid-February, it was still a distant one.

“We believe this situation to be temporary and expect availability to improve after Chinese New Year, though likely to persist well into Q2 2021,” Dixon said. “This process will be supported by a gradual normalization of trade patterns and carrier schedules.”

How to Improve OTIF: 15 Tips for On Time and In Full Delivery
END_OF_DOCUMENT_TOKEN_TO_BE_REPLACED