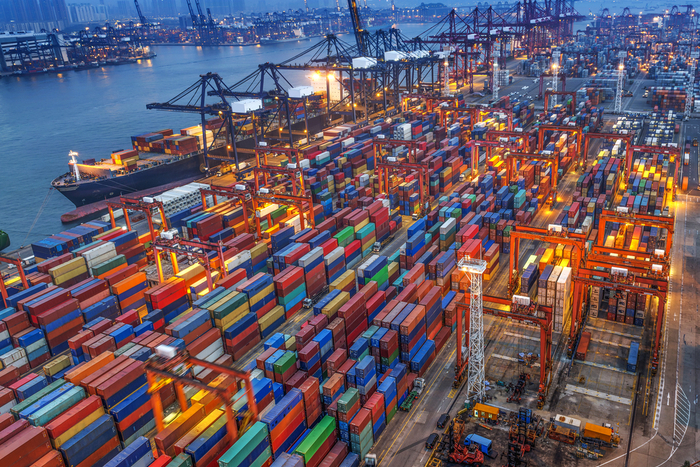 Carriers are prepared to cancel more sailings in the months ahead if prospects for the third quarter remain bleak. Photo credit: Shutterstock.com.

With US retailers projecting double-digit declines in containerized imports into the fall, carriers’ hopes for a peak-season rebound in the eastbound trans-Pacific are fading fast.

Global Port Tracker, published monthly by the National Retail Federation (NRF) and Hackett Associates, projects double-digit declines in US imports in May through August, and a 9.3 percent decline in September, compared with the same months last year. Due to the uncertain retail environment resulting from the impact of the coronavirus disease 2019 (COVID-19) on consumer demand, the NRF said retailers are being cautious in projecting import volumes beyond September.

“Shoppers will come back and there is still a need for essential items, but the economic recovery will be gradual and retailers will adjust the amount of merchandise they import to meet demand,” Jonathan Gold, NRF vice president for supply chain and customs policy, said in a statement.

Nevertheless, because the peak shipping season for imports from Asia generally runs from August through October, retailers are signaling to the trade they expect peak season 2020 to be weak, at best, which would be a continuation of the first half of the year. Global Port Tracker projects first-half imports will decline 13 percent from the same period in 2019.

Carriers are prepared to cancel more sailings in the months ahead if prospects for the third quarter remain bleak. Carriers in the trans-Pacific trade have already announced blank sailings into July that will reduce capacity in the largest US trade lane by 17.3 percent, according to this week’s Sunday Spotlight published by Sea-Intelligence Maritime Consulting.

Carriers appear to be waiting for as long as possible before announcing more blank sailings, said Alan Murphy, CEO of Sea-Intelligence. “As we are seeing the pandemic gradually coming under control, the carriers appear to be awaiting what the impact will be on the global economy past Q2 before making more large-scale decisions on network changes,” Murphy said.

Carriers in 2019 reduced capacity in July more than 5 percent to the West Coast and 4 percent to the East Coast through blank sailings. So far, carriers have announced less than a 1.5 percent capacity reduction to the West Coast and no blank sailings to the East Coast in July, Murphy said. Sailings that are blanked at Asian ports in July will not arrive at US ports until August.

Because carriers usually provide a lead time of three to four weeks from the announcement of a blank sailing and the date it is blanked, their plans for vessels scheduled to arrive at US ports in September and October are still uncertain.

“Quite likely, they are in a wait-and-see pattern, with a small hope that we might see a rebound coinciding with the normal peak season,” Murphy said.

Because retailers are projecting double-digit import declines through the summer, a rebound this fall is looking less likely. Global Port Tracker projects imports will decline 20.4 percent in May, 18.6 percent in June, 19.3 percent in July, 12 percent in August, and almost 10 percent in September as consumer demand has gained no traction this spring. Prospects for the holiday shopping season, though, are still to be determined.

“Much will depend on consumers’ willingness to return to spending,” said Ben Hackett, founder of Hackett Associates. “Our view is that second-quarter economic growth will be significantly worse than the previous quarter, but we continue to expect recovery to come in the second half of the year, especially the fourth quarter and into 2021. This is based on the big, and somewhat tenuous, assumption that there is no second wave of the virus.”

Murphy indicated that based on early announcements of blank sailings for July, carriers will be ready to cancel more sailings if trade conditions in the eastbound trans-Pacific do not pick up soon.

“The carriers have presently blanked a very limited amount of capacity in July, and certainly much less than what they did last year,” he said. “We might well end up in a situation with a much higher level of blank sailings in July 2020 than we saw in 2019.”