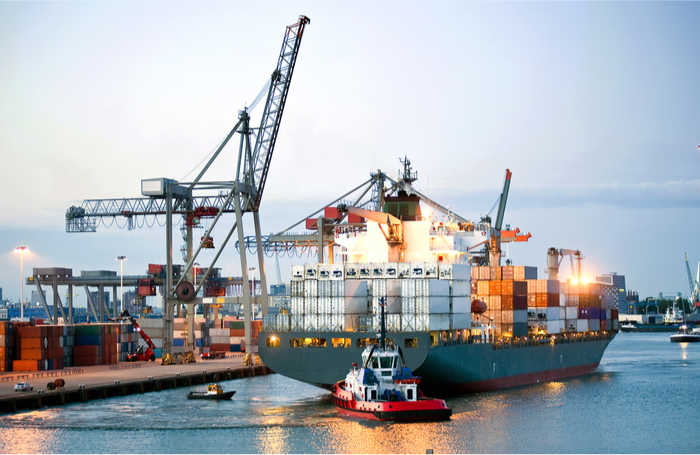 Carriers are taking a pessimistic view of the Asia-Europe peak season this year amid a slowdown in the major European economies and weakening factory output in China. Photo credit: Shutterstock.com.

Carriers on the Asia-Europe run are not expecting much from the peak season this year, with two of the alliances planning to remove more than 130,000 TEU in canceled sailings over July and August.

The Ocean Alliance will blank four sailings during the period, taking 66,900 TEU out of the trade over a four-week period, according to Alphaliner. This comes just days after THE Alliance announced four blanked sailings of its own that will remove 67,000 TEU in July.

It is a clear signal that carriers are taking a pessimistic view of the Asia-Europe peak season this year amid a slowdown in the major European economies and weakening factory output in China.

Felix Heger, DHL Global Forwarding head of ocean freight and China rail, said the demand signs over the next couple of months were not very positive.

“An increasing number of blank sailings has been announced, which is a sign that carriers follow the same train of thought,” Heger said. “More blank sailings mean an adverse effect on transport reliability in the short term, and we are indeed likely to see this from some carriers in the second half of this year.”

Supporting this view of weakening demand is the IHS Markit/Caixin China General Manufacturing Purchasing Managers’ Index (PMI) that in June slid to its second-lowest since June 2016, indicating a clear contraction in the manufacturing sector.

It was equally uncertain at the other end of the Asia-Europe trade, where the IHS Markit Eurozone Manufacturing PMI revealed that operating conditions in Europe deteriorated for a fifth successive month during June.

“Eurozone manufacturing remained stuck firmly in a steep downturn in June, continuing to contract at one of the steepest rates seen for over six years,” said Chris Williamson, chief business economist at IHS Markit. JOC.com is a unit of IHS Markit.

No blank sailings from 2M

However, even as the Ocean Alliance and THE Alliance prepare to remove large amounts of capacity from Asia-Europe through July and August, the 2M Alliance of Maersk Line and Mediterranean Shipping Co. has announced no such blanked sailings on the trade.

Maersk and MSC are facing a shortage of mega-ship tonnage with five of the giant vessels in dry dock, and Alphaliner reported that four of the vessels will remain on blocks as scrubbers are fitted.

Alphaliner believes this could negate carrier efforts to reverse rate declines on Asia-Europe. The Shanghai Container Freight Index shows that spot rates for Asia-Europe have declined almost 30 percent since the end of December and are currently down 14 percent compared with the same week last year. The weekly rate movements are tracked at the JOC Shipping & Logistics Pricing Hub.

The analyst also pointed out even though the sailing withdrawals will cap the capacity for the next few weeks, the weekly capacity to North Europe will still be 5 percent higher in August compared with a year ago unless additional blank sailings are made.

In addition to alliance cuts, APL, a member of the Ocean Alliance along with parent CMA CGM, will skip sailings in its MX2 service between Asia and the Mediterranean in July.

According to maritime analyst SeaIntelligence, excess capacity on the Asia-Europe trade reached 1.03 million TEU in the first quarter, despite solid year-over-year demand growth of 6 percent.

But crucially for the carriers, spot rates were largely stable through the first quarter, fluctuating within a narrow range of about $60 per TEU, although tracking downwards from January through April.

According to rate marketplace Freightos, China-Europe spot rates are currently at $1,289 per FEU, and while the prices have remained stable in the first half of the year, they are still down 16 percent from the same 2018 period and down 37 percent from 2017. A series of freight-all-kinds (FAK) rate increases on Asia-Europe were levied July 1, but it remains to be seen whether they will stick.

“Bearing the brunt of the 18,000-plus-TEU mega-vessel rollout, supply continues to outstrip demand, at least until APL withdraws [from Asia-Europe] after peak season,” Freightos said in its weekly update. “Despite this, carriers are trying to increase prices to cash in on the bottleneck preceding Europe’s pre-August shutdown.”

CMA CGM will pull APL off the Asia-Europe trade after the summer to allow the carrier to focus on its core trans-Pacific and intra-Asia trades.

The rest of the year remains uncertain. Moody’s said although the China Containerized Freight Index (CCFI) rose in the first months of this year following a challenging 2018, the index — which tracks spot and contractual freight rates from Chinese ports on 12 shipping routes — declined seasonally after the Chinese New Year. Given that fuel prices are rising, increases in freight rates will be needed to compensate for these rising expenses.