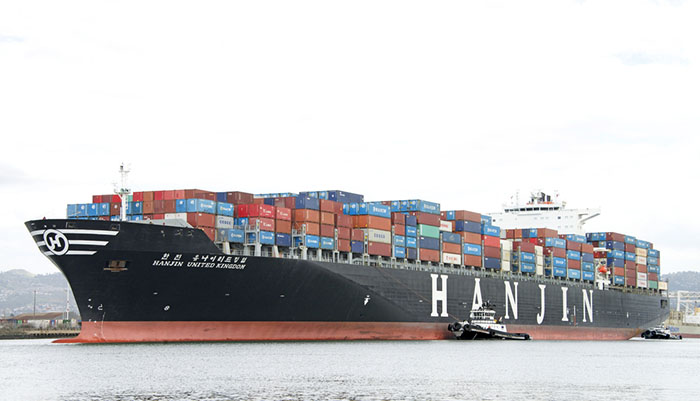 Shippers and container lines need to pay more attention to risk management in the wake of the Hanjin Shipping bankruptcy.

It is not only shippers that need to pay attention to the financial state of carriers they contract with after the mess Hanjin Shipping left behind — container lines will also need to be sure of the financial health of their alliance partners.

Hanjin’s collapse exposed many shippers that had booked space from other ocean carriers that happened to be service partners, and customers are now much more aware that the risks extend beyond their own chosen service provider, according to Drewry’s Container Insight Weekly.

The analyst said some shippers would demand that their cargo be booked on the liners’ own ships, and would award more container volumes to lines in better financial health and to those that provided visibility into their financial state.

But Drewry warned that getting financial visibility was not always possible, as some large carriers, such as Mediterranean Shipping Co. and Hamburg Sud, did not publish their financial results. Others only reported at the group level with minimal data for container operations.

“The demand for financial transparency is increasing and Drewry is aware that some large shippers are now requesting access to ‘hidden’ financial information before entrusting their cargoes, in return for signing a non-disclosure agreement,” the maritime analyst said.

“As more shippers demand access to financial data during contract negotiations it will become harder for secretive carriers to hold down the drawbridge.”

Getting out of financial difficulties will not be easy. In the first half of 2016, out of all the carriers that report their results, only Wan Hai Lines managed to achieve a positive operating margin. Hanjin’s operating margin was a negative 10 percent, but there were four lines even worse off — Evergreen Line, China Cosco Shipping, Yang Ming, and Hyundai Merchant Marine.

Drewry said container industry debt was climbing again and container lines did not have enough cash to meet their interest expenses. Ballooning debt and negative cash flows for an extended period would exert serious strain on the business viability of container lines, which would increase the pressure on carriers to sell assets to stay afloat, or submit to being taken over.

The level of financial risk varied significantly between the companies in the analyst’s basket of carriers. Based on the latest available financial reports, Drewry's Z-score table showed that only two (Maersk Group and Orient Overseas International Limited) of the 14 selected companies scored high enough to make it to the cautionary “grey zone,” with the remainder struggling in the “distress zone.”

“The decline in the Z-score index has coincided with the heavy reduction in container freight rates that dropped to historical lows in the second-quarter,” Drewry noted. “As freight rates staged something of a recovery in third-quarter we expect to see some uptick to the Z-score when the third-quarter 2016 results are published, while the removal of Hanjin from the sample will also benefit the average score. Nonetheless, carriers will almost certainly continue to reside in the distress zone.”

There were lessons to be learned from Hanjin’s bankruptcy, and the main one was that no carrier was too big to fail, with the expectation that a white knight would rescue an ailing carrier erased forever, the analyst said.

Drewry said that while Hanjin’s financial position was at the extreme edges and its demise was not expected to create a domino effect, a number of major carriers were still struggling and the risk of another bankruptcy could not be discounted. Knowing these things, any company doing business with ocean carriers should undertake more due diligence than before.

“Hanjin’s bankruptcy has exposed the high level of financial risk that exists and has created renewed demand for financial transparency. Privately-owned carriers will risk losing shippers’ trust if they do not provide any data on their level of indebtedness and balance sheet strength,” Drewry said.

Thank you for helping people

Permalink Submitted by japan.comp234@g... on Dec 16, 2016 7:39AM EST
Thank you for helping people get the information they need. Great stuff as usual. Keep up the great work!!! <a href='http://pc4u.org/best-gaming-monitor/'>Best Gaming Monitor</a>
Maritime News›Container Lines
International Logistics
International Logistics›Logistics Providers