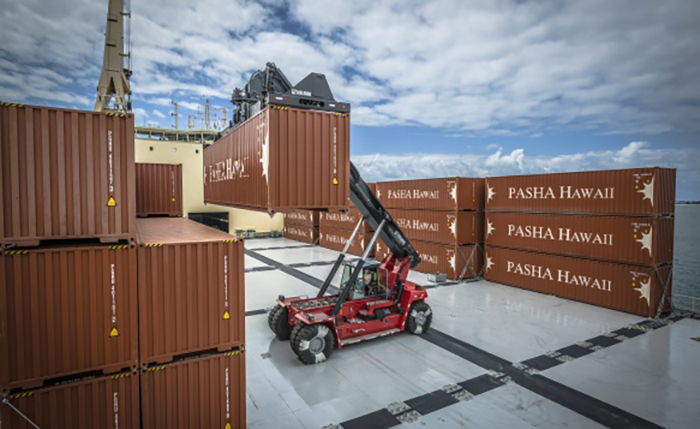 Pasha Hawaii is one of three carriers in the US-Hawaii Jones Act trade.

TOTE, which operates in the Puerto Rico and Alaska domestic trades, last week announced plans to build four 3,700-TEU ships for a new Hawaii service that would compete with Matson and Pasha. Maritime analyst Alphaliner said the entry of TOTE will be “highly disruptive” to its two competitors, as Hawaiian volume hinges on the health of island construction and tourism. Matson had noted shrinking Hawaiian trade in the first half

Pasha has ordered two 2,525-TEU ships which it had previously said would be built by Keppel AmFELS in Brownsville, Texas. The new vessels will replace four 1970s-vintage steamships the company acquired when it took over Horizon Lines’ Hawaii routes in 2015. Pasha also operates two newer vessels.

Analysts and industry officials say that if all of the new capacity enters service, it will outstrip demand and produce rate wars. “The trade is not large enough for three competitors. It would kill the market,” analyst Kevin Sterling of Seaport Global Securities told JOC.com.

Before TOTE’s announcement last week, Matson CEO Matt Cox warned that the market had all the capacity it needed and that additional ships could undermine rates. Matson’s stock price plunged 22 percent to $22.79 on the day after TOTE’s Aug. 17 announcement. It was up marginally to $24.23 early today, Aug. 24.

Despite the recent flurry of announced ship orders, Sterling questioned whether the Hawaii trade will end up with three major competitors. “There could be some gamesmanship going on here,” he said. “TOTE is a good operator. They’re not crazy or naive enough to ruin this market.”

In a research note, Sterling suggested that TOTE may be trying to displace Pasha in the Hawaii market. He said Pasha is more highly leveraged than Matson but “will not go away easily” and that a price war could develop after the carriers deploy new ships around 2020.

How the competition plays out may hinge on the Kapalama Container Terminal, which the Hawaii Department of Transportation is building in Honolulu, across a channel from the Sand Island terminal where Matson and Pasha now operate.

When it announced plans to build four ships at Philly Shipyard for its planned Hawaii service, TOTE said that securing space at Kapalama would be “a critical step in making the new service a reality.”

“TOTE needs that terminal,” Sterling said. TOTE said it had entered discussions to operate the terminal. If the company succeeds, it would increase pressure on Pasha, which plans to move its Honolulu operations to Kapalama from Sand Island.

Matson, meanwhile, said it has ordered three new container cranes to replace older cranes at Sand Island, where the company is investing $60 million in improvements to prepare for new ships the carrier is building in an upgrade of its Hawaii fleet.

Any new entrant to the Hawaii market will face “substantial” costs for capital investment in terminals as well as ships, Cox told analysts recently.

Vessels in US domestic trades including Hawaii, Alaska, and Puerto Rico are shielded from foreign competition by the Jones Act, which requires US-flag, US-built ships crewed and owned by US citizens. Critics of the act, including some Hawaii shippers, say the requirement inflates rate levels.

Matson expects to spend a total of $926 million for two 3,600-TEU ships being built at Philly Shipyard and two container/roll-on, roll-off vessels under construction at NASSCO in San Diego. Pasha’s new ships are expected to cost a total of more than $400 million.

All major Jones Act markets have been in relatively close supply-demand balance since Horizon, the largest domestic operator, ceased operation in 2015. Horizon closed its Puerto Rico service and sold its Alaska service to Matson and its Hawaii routes to Pasha.

The recent new ship orders in the Jones Act trades have been spurred by stringent emission requirements that take effect in 2020. New vessels ordered by Pasha, TOTE, Matson, and in Crowley’s Puerto Rico service will use clean-burning liquefied natural gas fuel.

Pasha’s new ships are expected to be delivered in the first and third quarters of 2020. Their 2,525-TEU capacity will include 500 fully-laden 45-foot containers, 400 refrigerated containers, and 300 forty-foot dry containers. Pasha said the ships will have hulls designed with computational fluid dynamics for reduced water resistance and will have other energy-saving features.