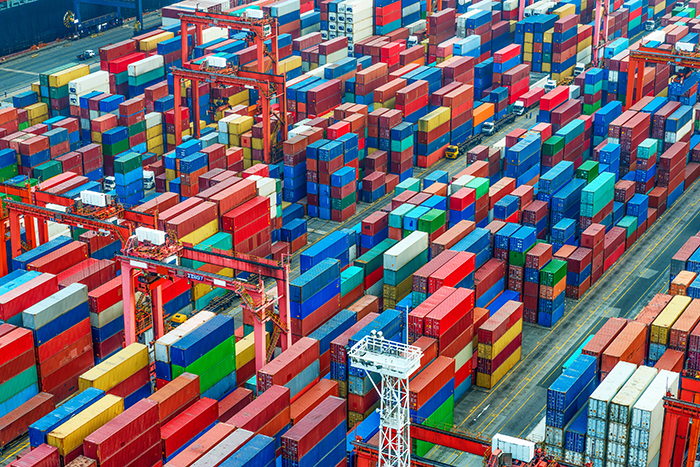 Ocean freight spot rates from Asia to the US East Coast jumped 14.7 percent year over year to $2,711 per FEU this week, according to the Shanghai Containerized Freight Index. Photo credit: Shutterstock.com.

Drought conditions in Panama are restricting capacity and forcing spot rates from Asia to the US East Coast higher, even as rates to the West Coast dropped this week.

The spot rate from Shanghai to the US West Coast dropped below $1,500 per FEU this year for the first time since March 8. However, the rate of $1,442 was only 4.3 percent higher than one year ago, indicating spot rates are experiencing the normal seasonal lull before back-to-school imports pick up in early summer.

The spot rate this week of $2,711 per FEU to the East Coast was 14.7 percent higher than the rate of $2,364 one year ago, according to the Shanghai Containerized Freight Index published under the JOC Shipping & Logistics Pricing Hub.

The outlook for spot rates in the coming weeks is uncertain due to the Trump administration’s increase of tariffs on more than $200 billion worth of imports from China from 10 percent to 25 percent, effective Friday. US-China negotiations are ongoing. Retailers and manufacturers are still working down the inventories they front-loaded in late 2018 before the first deadline for 25 percent tariffs on Jan. 1, 2019, which was delayed. Therefore, a prolonged tariff war could squeeze US imports, which would drive down spot rates in the coming weeks unless carriers slashed capacity as they did late last year with about three dozen blank sailings.

On the flip side, if US importers take seriously Trump’s threats to add the remaining $300 billion in Chinese goods — a list that includes previously spared products such as cell phones, laptop computers, and video game consoles — they could potentially front-load imports again this year, causing another early peak season and driving spot rates up sooner than usual.

Despite the uncertainties surrounding the tariffs, retailers project relatively strong imports at least through the summer months. The Global Port Tracker, published by the National Retail Federation and Hackett Associates, projects US imports will be 3.9 percent higher in the first half of the year compared with the first six months of 2018. Imports are projected to be 3 percent higher in July and 4.6 percent higher in August year over year. According to PIERS, a JOC.com sister company within IHS Markit, imports from Asia in the first quarter were down 0.4 percent, but total US containerized imports from all countries were up 2.4 percent year over year.

does the rate mentioned here