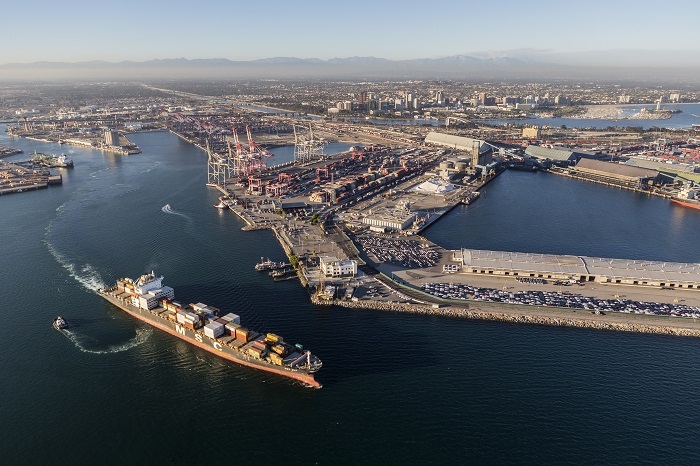 Cosco signed a national security agreement with the United States on July 6 agreeing to sell the Long Beach facility. (Above: The Port of Long Beach.) Photo credit: Georgia Ports Authority.

Hong Kong-listed OOIL is set to kick off the sale process of its Port of Long Beach container terminal on the US West Coast next month in a multibillion dollar deal, likely attracting mainly North American private equity, pension funds, and other financial investors.

The sale could be one of the largest terminal deals ever, dwarfing the $2.4 billion sale of OOIL's terminals on the US East Eoast and in Vancouver, Canada, in 2006.

"Terminal giants will follow the sales process when it starts next month but it will be pension funds, investment companies, etc. who will make the investment," a financial adviser with knowledge of the deal told Fairplay, a sister product of JOC.com.

The current management team is likely to be kept on by the new owner, the financial advisor said, whose views were echoed by Tim Smith, Asia Pacific head of Maersk's terminal company, APM Terminals.

Smith, who was previously chair of Maersk China before taking up his APM Terminals role in March, also ruled out any Maersk interest in buying OOCL's Long Beach terminal.

"[There is] no APM Terminal interest in OOCL’s Long Beach terminal. We already have all that we need at our existing Pier 400 terminal," Smith told Fairplay.

"I believe it will be pension funds and financial institutions that principally would be interested in OOCL’s facility," Smith added.

Sources said JP Morgan has been appointed by OOIL as the sole financial adviser on the Long Beach deal. JP Morgan was also OOIL's financial adviser when Cosco Shipping Holdings and Shanghai International Port Group made their cash offer to buy OOIL/OOCL in July 2017.

Agreement with US government to sell Long Beach terminal

OOCL agreed to sell its Long Beach terminal while the US government's Committee on Foreign Investment in the US (CFIUS) was reviewing OOIL's $6.3 billion takeover by mainland China's Cosco Shipping Holdings earlier this year.

Cosco signed a national security agreement with the United States on July 6 agreeing to sell the Long Beach facility.

There had been concern CFIUS, which includes representatives from US government departments including defense and oversees US national security interests, would block the Cosco-OOIL deal unless the terminal is sold.

As it is, CFIUS is taking keen interest in the terminal's sale process, hence the likelihood North American investors would be preferred.

Canada's Ontario Teachers' Pension Plan (OTPP), which agreed to pay OOCL's Hong Kong-listed parent, Orient Overseas (International), $2.4 billion to acquire four OOCL terminals in New York, New Jersey, and Vancouver in November 2006, would not comment on whether it was interested in buying the Long Beach terminal.

OTPP, which has an office in Hong Kong, is one of the world's largest institutional investors with total assets of about C$189.5 billion ($144.1 billion).

OOCL carried out an open competitive tender for the sale of its New York, New Jersey, and Vancouver terminals that OTPP subsequently won. One of the conditions to the sale was that CFIUS gave written undertakings to OOIL that it wouldn't investigate the OTPP transaction or that the US president at the time would not intervene.

OOCL spokesperson Mark Wong confirmed the sale of the Long Beach terminal is progressing but would not comment further.

OOCL’s subsidiary, Long Beach Container Terminal is operating the Middle Harbor facility. The first two phases opened in 2016 although overall completion of the terminal, which is being built by the Port of Long Beach, is not expected until 2020 when it will cover about 306 acres and have a capacity to handle 3.3 million TEU.

A version of this report was originally published on Fairplay, a sister product of JOC.com within IHS Markit, on Nov. 19.