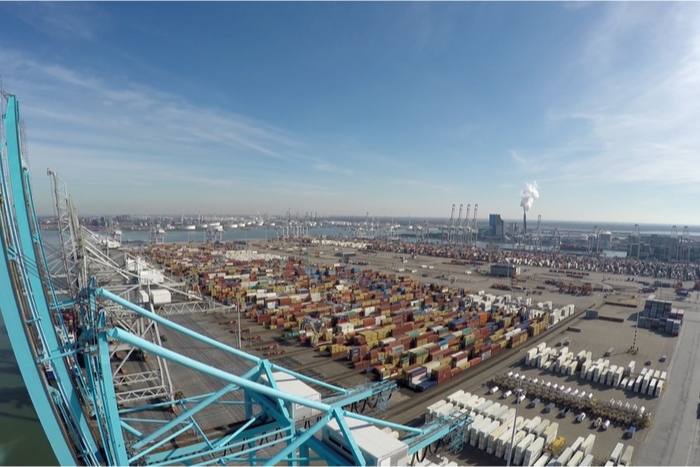 The huge number of blank sailings will severely affect Europe's hub ports this second quarter, with little demand from a locked down population. Photo credit: Shutterstock.com.

Blank sailings will peak on the Asia-Europe trades in the next three weeks, with carriers withdrawing close to 40 percent of capacity in an attempt to match their available space with evaporating demand.

Blanked sailings linked to the coronavirus disease 2019 (COVID-19) until week 28 beginning July 6 currently stand at 55 on Asia-North Europe and 38 on Asia-Mediterranean, Sea-Intelligence Maritime Consulting reported in its Sunday Spotlight newsletter. The analyst said the next three weeks would see 35 percent of Asia-Europe capacity pulled from the trade.

Maritime academic Theo Notteboom said the withdrawn capacity this week could be as high as 38 percent. “This week and next week will be the worst in terms of blank sailings, but still next month 25 to 30 percent of all sailings out of China to Europe will be blanked,” he told JOC.com.

The unprecedented number of canceled sailings will extend until July, a clear indication of low demand expectations by carriers and a lack of forward bookings. That means Europe’s hub ports will take a hit at least through the second quarter.

First quarter results from Europe’s two busiest container gateways — Rotterdam and Antwerp — indicate that the true impact of COVID-19 has yet to be felt by the region’s port hubs. The 3.54 million TEU handled by Rotterdam in Q1 was down 4.7 percent year over year, but the drop in volume from Asia was down a modest 2.8 percent, considering the closure of China factories throughout February and the fact more than half the port’s container throughput is destined for or originates in China.

Antwerp’s first quarter performance was even stronger, with the Belgian hub reporting a 9.5 percent surge in volume, to 3.02 million TEU. But executives at both ports warned that a sharp drop in volume was coming down the pipeline.

“The impact of the crisis during the first quarter has remained fairly limited, but it will become apparent in the second quarter with canceled departures, large sectors of industry such as the car industry in Western Europe being shut down, and changing patterns of consumer behavior,” Antwerp said in a statement on its first quarter performance.

Port of Rotterdam CEO Allard Castelein said declining demand would become clear from April onwards, and predicted a drop in volume of up to 20 percent for the full year.

Notteboom — a professor of maritime studies affiliated with the Shanghai Maritime University, the University of Antwerp, and Ghent University — said if container throughput at Europe’s hubs declined 20 percent this year, that would likely mean that over the next few months, volume at the ports would drop as much as 35 percent.

He explained that containers shipped from China after measures to limit the spread of the coronavirus eased and factories were reopened in March had all arrived in European ports by mid-April.

“But from now there will be a huge reduction in volume because of the enormous numbers of blanked sailings from Asia,” Notteboom said. “This week and the last week of April will be the worst in terms of blanked sailings on Asia-Europe, with 38 percent of capacity removed.”

Notteboom compiles the IAPH-WPSP Port Economic Impact Barometer with professor Thanos Pallis from the University of the Aegean and Universidad de Los Andes; the weekly survey takes the pulse of port operations around the globe.

In this week’s report, released Friday, the barometer showed an interesting development. Despite the huge number of blanked sailings, the decline in the number of deep-sea container vessel calls was being counterbalanced by carriers increasing the frequency of regional feeder services.

“Ports are seeing more calls by regional and short-sea vessels because cargo from congested yards and depots is being moved out of ports and closer to their final markets,” Notteboom said. “There is also a repositioning of cargo going on in Europe between depots and distribution centers because of the low demand.”

The ports survey found that at some ports in Europe, yard congestion was the result of laden imports of non-essential goods, including new cars, which remained in port longer than usual. This left storage capacity within the ports in critical short supply, but the report noted that respective governments have allowed the weekly release and acceptance of import and export of non-essential goods on an average of three days a week, a move the port barometer noted had brought down storage utilization at container yards by 60 percent.