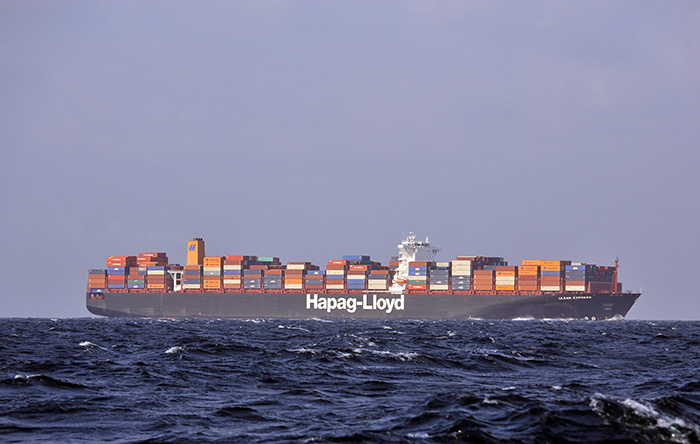 Hapag-Lloyd continues to try and reduce no-show containers, having instituted a booking cancellation fee between Singapore and India earlier this year.

The New York Shipping Exchange (NYSHEX) has added three new carriers to its list of partners  — Hapag-Lloyd, MOL, and Orient Overseas Container Line — and said it will receive $4.5 million in funding from Hapag-Lloyd, CMA CGM, and other investors.

NYSHEX — a start-up exchange portal with the goal of reducing the uncertainty for shippers and carriers in the process of making and fulfilling global cargo bookings — said the new investment brings its total venture capital funding to $13 million. Earlier Series A investments of $8.5 million were made by Goldman Sachs and General Electric.

NYSHEX announced last week that a new partnership with CMA CGM would enable US exporters during the peak season to secure space on the third-largest container line’s extra loaders calling the ports of Houston, Savannah, Miami, and Jacksonville.

The company is one of a slew of technology-fueled start-ups that have in recent years attracted hundreds of millions of dollars in venture capital for products — including marketplaces, digital freight forwarding operations, equipment tracking devices, and big data decision-making aides. Their proponents hope to transform the shipping and logistics industry, which critics say has been slow to adapt to new technology.

Gordon Downes, CEO of NYSHEX, welcomed the investment from carriers, saying it “demonstrates the industry’s confidence in the role that NYSHEX is playing in global shipping.”

The portal was launched in July with a beta, or test, version available to just a few customers, and will be open for east and west trans-Pacific routes to all interested users at the end of this month.

NYHSEX seeks to solve the much-discussed, longstanding uncertainty in the supply chain created by shippers that often fail to deliver the amount of cargo that they have committed to send, and carriers that often do not ship cargo when they say they will, and instead leave it on the dock.

Shippers can book cargo space through the portal, which also monitors whether the booking is fulfilled by shipper and carrier. Shippers and carriers sign a contract, and if either party fails to fulfill its obligation, it forfeits between 30 to 40 percent of the agreed shipping cost, depending on the route.

Carriers pay a $5 per TEU transaction fee and shippers and non-vessel-operating common carrier use NYSHEX at no cost although they must be pre-accredited with NYSHEX to get started.

“Hapag-Lloyd invested because we believe NYSHEX can help solve the challenge of unreliability and unpredictability that affects everyone in the container shipping industry, by ensuring commitments are met by both sides,” said Thorsten Haeser, chief commercial officer of Hapag-Lloyd.

The reliability figures come from the experience of users, according to NYSHEX officials, who estimate that without the contract and penalty system “current downfall rates range from 17 percent to above 50 percent.”

He said the company “welcomes the digital innovation that NYSHEX is bringing to the container shipping industry. Digitalization is essential to offering our customers new and differentiated products.”