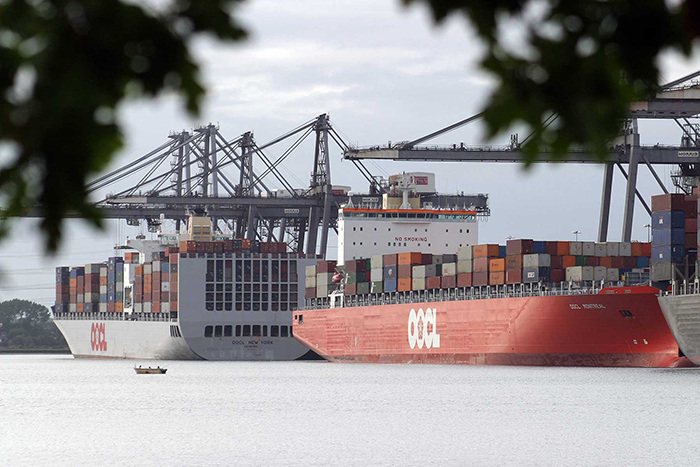 It is uncertain if Orient Overseas Container Line is on the bidding block.

Speculation by analysts that Orient Overseas Container Line’s parent OOIL is for sale continues, with those being tipped as potential buyers limited to the carrier’s partners in the new Ocean Alliance that starts operating on April 1.

Alphaliner is betting on Cosco Shipping or Evergreen Line, while Drewry believes CMA CGM is the favorite to take over the Hong Kong-based line either by acquisition, merger, or reverse merger.

There was no confirmation of any sale from a spokesperson for OOCL. “Many of us have seen a number of changes in the industry landscape over the past year and during this period, many rumors on various topics have spread and speculative reporting have been made from time to time, including those about OOCL. While we appreciate the public discourse, we would not be in any appropriate position to respond to the rumors and speculations.”

CMA CGM was equally non-committal. “CMA CGM notes the recent media speculation. As a matter of company policy, we do not comment on rumors or speculation,” the French line said in a statement.

Talk of a takeover continues to stimulate trading in OOIL stock on the Hong Kong Exchange, with more than 600 shares being traded every minute shortly before the bourse closed at 4 p.m. local time. The share price is up around 20 percent since trading closed at the end of December.

The Tung family owned carrier has consistently managed to remain profitable, although when OOIL reports its 2016 financial results it is expected to post its first loss in seven years. The problem facing OOCL is that it is stuck in the middle in terms of scale with a 20-foot-equivalent unit capacity of 575,561 putting it at No. 8 in the world and with a global market share of less than 3 percent.

Shipping lines have only two viable paths: Become a scale leader or become a niche player focused on certain trades, according to a Boston Consulting Group report. Companies that haven’t adopted either of these approaches will lack sufficient scale to drive down costs and the differentiation that can offer unique commercial value or command premium rates.

Even with the consolidation, container shipping remains a very challenging business. Dynamar estimates that the top 12 container lines lost a combined $13 billion in the first three quarters of 2016. While rates improved in the final three months of 2016, few lines are expected to record a full-year profit.

Patrik Berglund, CEO of rate comparison platform Xeneta, said with the majority of carriers losing money hand over fist last year, profit was the Holy Grail and all parties needed to chase the pennies.

“Whoever achieves the lowest cost base per TEU, while at the same time optimizing their agreements on every single transaction, will emerge as the victors in this ultra-competitive landscape,” he said. “A few dollars here and there on every container can add up to millions in profit for the biggest players.

Having the ability to operate larger vessels is another area that can pay off in terms of lower container slot costs that can improve competitive advantage. The bigger, newer, and more efficient the ship, the lower the slot cost.

But the market conditions that resulted in the long-awaited industry consolidation last year have not changed — capacity this year will still outstrip demand by some measure, low rates will persist, and container lines are likely to remain unprofitable.

On top of that, Alphaliner said carriers will face a further challenge from rising bunker fuel prices that doubled in 2016. Bunker fuel is currently at $330/ton compared with $160/ton a year ago.

The analyst said the only consolation for carriers was that charter rates were expected to remain at rock bottom levels in 2017. Alphaliner’s charter rate index recorded its lowest-ever average annual level in 2016, with little prospect of a reversal in the coming year in the face of the massive supply overhang that is affecting all size segments.

So the quest for scale by the larger container lines will continue in 2017 and more mergers and acqusitions are inevitable. OOCL is an attractive target and if a suitor comes up with the right price, the Hong Kong carrier could be the latest shipping company to jump on the consolidation wagon.

Permalink Submitted by ferrullig@minds... on Jan 13, 2017 11:42AM EST
Anyone read yesterdays announcement on China putting $29. Billion into Cosco over the next 5 years? Who has to make money? After Taiwan put up money for Evergreen and Yang Ming, China outdid them $$ wise, but it shows that making money isn't necessary and achieving the lowest cost is only for those who don't have a government willing to pour money into a money losing enterprise. Great business to be in.

How to Improve OTIF: 15 Tips for On Time and In Full Delivery
END_OF_DOCUMENT_TOKEN_TO_BE_REPLACED