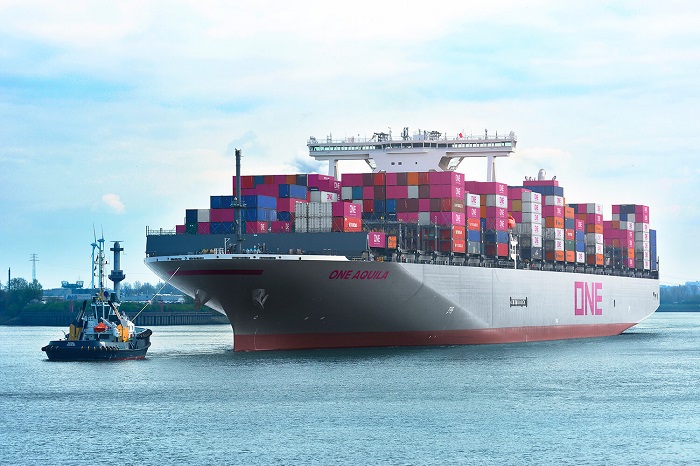 Ocean carriers have struggled this year with higher bunker fuel prices and lower-than-expected rates in the second half of the year, along with uncertainty over the impact of tariffs and continued oversupply of capacity. Photo credit: Ocean Network Express.

One Network Express (ONE) has regained the trans-Pacific business it lost in its challenging spring merger of the operations of three Japanese carriers, but it’s still expecting a $600 million loss this year, underscoring the darkening outlook for the industry hit by higher fuel post and persistent overcapacity.

The ocean carrier — which launched in April and comprises “K” Line, MOL, and NYK Line — said in its half-year earnings report that it collectively expects to lose $310 million in the first half of the year, on revenue of $5.03 billion. The full-year expected loss of $600 million is over revenue of $11 billion. The two losses are significantly higher than the previously announced losses of $38 million for the half year, and $110 million for the full year.

Ocean carriers have struggled this year with higher bunker fuel prices and lower-than-expected rates in the second half of the year, along with uncertainty over the impact of tariffs and continued oversupply of capacity. There are also signs of volume growth slowing, with Europe’s inbound volume from Asia growing by just 1.3 percent in the first half of the year, and reports of negative numbers at ports on the Asian end of the trade route. The next round of quarterly earnings will begin on Nov. 14, with the Maersk third-quarter report.

Zim Integrated Shipping Services suffered a $67.3 million first-half net loss, and Hapag-Lloyd had a net loss of $116 million over the same period. CMA CGM reported a net loss of $34.4 million in the second quarter, largely due to higher bunker prices. Maersk Line managed to post a profit of $26 million in the quarter, largely due to discontinued operations. If the $111 million profit from discontinued operations was removed, Maersk would have suffered a loss of $85 million against a $10 million profit in the second quarter of 2017.

Average bunker fuel prices through August were up 43.7 percent from June 2017 to $444 per metric ton ($404 per ton) across Rotterdam, New York-New Jersey, and Shanghai.

ONE’s share of the Asian import market rose to 15.4 percent from July to September, making it the top-ranked carrier on the market by volume, according to figures from PIERS, a sister product of JOC.com. The carrier fell to second place — behind CMA CGM/APL — when its market share fell to 13.9 percent in the second quarter of the year, down from the 15.8 percent market share at the start of the year, the figures show.

The integrated carrier handled 675,617 TEU in the third quarter of 2018 in Asian imports into the US, a 2.4 percent decline from the same period in 2017, according to PIERS.

A statement on the “K” Line website said ONE benefited from some “synergistic effects of the business integration,” but container liftings and utilization “dropped due to the impact of teething problems immediately after the commencement of services in April. The carrier, announcing a loss of $120 million in the first quarter on $2.07 billion revenue, blamed the loss on several factors, including “lower-than-expected handling [of] volume for providing clumsy services in [the] initial stage right after service start-up and a rise in bunker prices on the expenditure side.”

The carrier said it tried to regain ground from July to September, during the peak season, but the “negative impact remained” on its main Asia-North America routes and Intra-Asia routes.

The carrier, explaining the poor performance, said “booking reception and documentation operations were delayed because ONE staff were not completely familiarized with the newly introduced IT system, and the staff were shorthanded.

“This caused significant inconvenience for customers,” the carrier said, adding that “issues such as the staff’s skill level and personnel shortages have already been addressed, and their operations have returned to normal.”

Still, the carrier added, the company’s “teething problems” have been resolved and the carrier is “working earnestly to restore the trust of customers and further improve service quality.”

Lars Jensen, CEO and partner at SeaIntelligence Consulting, called the ONE loss revision a “very dramatic adjustment.” In a post on the LinkedIn website, he likened it to the reports put out by Maersk in 2006 when it struggled to absorb P&O Nedlloyd.

IT problems were key elements in the difficulty both Maersk and ONE had in integrating another business entity, and ONE will not find it easy to boost bookings, he said.

“They will be faced with the same problems as the rest of the industry wherein fuel price increases are difficult to fully pass on,” Jensen wrote. “At the same time they will have missed out on the strongest peak in many years on the trans-Pacific eastbound trade.”