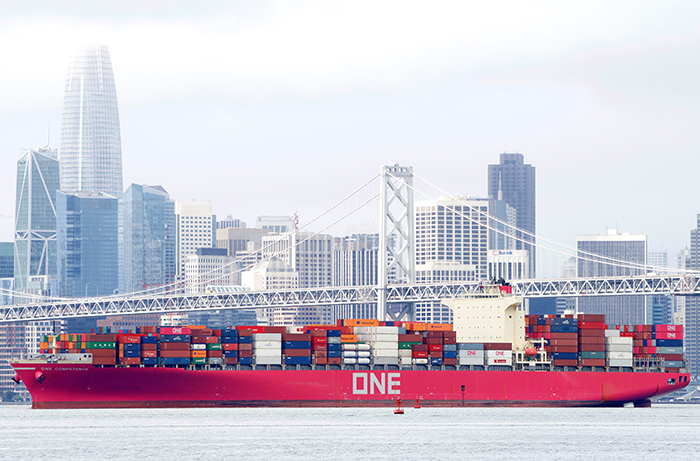 Ocean Network Express (ONE) expects to return to profitability in 2019 after reporting a $586 million net loss in its first full year in operation. Photo credit: Shutterstock.com.

The trio of Japanese carriers sailing under the Ocean Network Express (ONE) flag expect to get back into the black in 2019 after the merged operations reported a $586 million net loss last year.

The firms will be happy to see the back of their first year of operation, during which merger setup costs and launch problems hurt earnings.

With the teething problems now behind the carrier and a steadily improving performance through the year after a shaky first quarter, ONE is expecting a positive 2019. In its joint earnings statement, ONE said it was targeting a net profit of $85 million for 2019 and expects container volume to increase steadily through the year.

That positive outlook is shared by Hapag-Lloyd CEO Rolf Habben Jansen, who has predicted that global container volume will grow in line with market expectations of 4 percent and be supported by rising rates. “While our business is and will remain cyclical, market conditions have gradually improved for liner shipping companies over the last few years,” he said.

According to the latest IHS Markit Trends in the World Economy and Trade report, demand from the five largest container exporting nations — China, the US, South Korea, Japan, and Thailand — will grow at a rate of about 4.8 percent a year through 2025 before slowing to 4.3 percent by 2030.

Rising rates and demand in the second half of 2018 came to the rescue of container carrier financial results. Maersk Line posted a pre-tax profit of $238 million for 2018 compared with $25 million in 2017, while Hapag-Lloyd’s net profit for 2018 stood at $52 million compared with $37 million the previous year. On the other end of the financial spectrum, Cosco Shipping’s net profit declined 55 percent compared with 2017 to $179 million, and Israel-based Zim Integrated Shipping Services posted a loss of $119 million for calendar 2018.

With eastbound trans-Pacific volume growth declining following the front-loading of US imports from China last year and growth in westbound Asia-Europe volume slowing in early 2019, similar increases in demand are far from guaranteed.

NYK Line was the last of the ONE members to release its financial results, reporting a 58 percent year-over-year decline in container segment revenue for the fiscal year ended March 31, 2019. After the results were released, the carrier announced that NYK president Tadaaki Naito will relinquish his position in June to the group’s liquefied natural gas (LNG) division head, Hitoshi Nagasawa. Naito will become chairman of NYK.

A joint venture (JV) between the container shipping divisions of the three Japanese carriers, ONE’s shareholding is split between NYK with 38 percent, and MOL and “K” Line with 31 percent each.

NYK said higher-than-expected costs involved in merging the three container divisions were felt mainly in the first quarter, with integration issues occurring as operations began in April. This was echoed in the financial statements of MOL and “K” Line, which reported that the issues resulted in a drop in transport volume and slot utilization.

The scale of that drop in volume can be seen in ONE’s liftings data for the 2018 financial year. The merged carrier handled a total of 6.58 million TEU on the trans-Pacific and Asia-Europe trades, but volume on the trans-Pacific eastbound route in April, the first month of operation, was 100,000 TEU less than in any other month of the year at 94,000 TEU. April liftings on the Asia-Europe westbound trade, meanwhile, stood at 37,000 TEU, about 90,000 TEU less than any of the other months.

Also impacting revenue was higher empty container repositioning costs that NYK said resulted from the insufficient liftings on backhaul voyages from North America to Asia and from Europe to Asia, which placed pressure on the bottom line. Liftings on the return voyages began to recover from the second half, however.

With the poor first year now in the books, MOL said ONE’s cargo volumes and utilization rate will recover through 2019, allowing the carrier to move back into profitability as it focuses on optimizing its cargo portfolio, rationalizing services, and cutting fuel consumption and overheads.

ONE is also tilting toward deeper logistics services beyond conventional ocean shipping, and although CEO Jeremy Nixon has said he has no plans to follow the integrated logistics approach being taken by Maersk Line and CMA CGM, the carrier is planning to build on its terminal holdings in Asia, Europe, and Australia.

A new container terminal JV with PSA International in the carrier’s operating headquarters of Singapore, for example, will give ONE greater control of its volume in the busiest transshipment port in Asia.