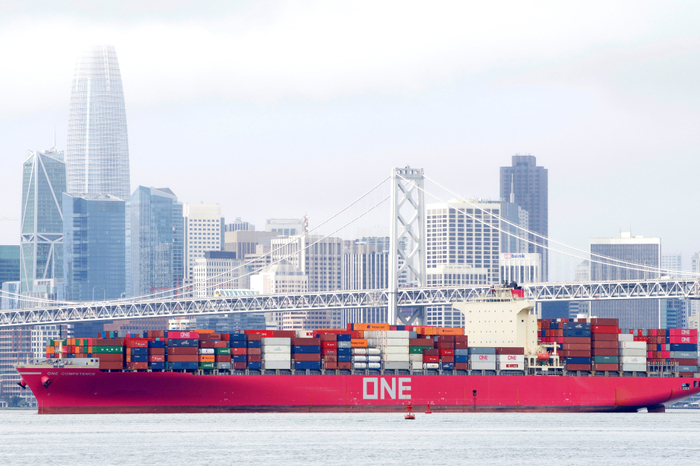 Maersk and NYSHEX are currently offering guaranteed ocean freight contracts, but the number of options available to shippers is expected expand in the months ahead. Photo credit: Shutterstock.com.

Half of the top 10 container lines plying the trades between the United States and Asia now offer mutually enforceable ocean freight contracts on the New York Shipping Exchange (NYSHEX) after Ocean Network Express (ONE) announced its membership Wednesday.

ONE is the seventh container line overall to join NYSHEX, an exchange portal with the goal of reducing the uncertainty for shippers and carriers in the process of making and fulfilling global cargo bookings. The exchange is aiming to solve longstanding uncertainty in the supply chain created by shippers that often fail to deliver the amount of cargo that they have committed to send, and carriers that often do not ship cargo when they say they will, and instead leave it on the dock, known as no-shows and overbooking, respectively.

“NYSHEX enables us to offer our customers an additional platform to contract with us, whereby the agreed terms are mutually enforceable,” Sundeep Sibal, senior vice president of Trans-Pacific and Trans-Atlantic trade at ONE, said in a statement. “The guaranteed equipment, space and price that we offer through NYSHEX will help our customers to plan their supply chain and to lock in their transport costs up front. Having our customer's commitment to show up with their cargo as contracted, allows us to optimize our network and more accurately plan our vessels.”

Digital contracts made through NYSHEX have achieved a fulfillment rate of 98.4 percent, the exchange said. NYSHEX is also expanding the services it offers from early 2020. The platform will support more customizable terms that form part of the digital and enforceable ocean freight contracts, including the ability to cater for multiple origins and destinations, and longer validities.

Don Chen, managing director - Asia for the NYSHEX, put the industry cost of rolled cargo at $23 million a year, and said the blame could be shared between both container lines and shippers.

“It is a costly practice, and shippers know carriers will accept more cargo as a buffer against no-shows, so for one shipment, they book with three carriers to see which one will release space,” he said during a session at the JOC TPM Asia Conference in Shenzhen in October. “Then if a customer shows up with all his containers, there will be rolling. It is a vicious cycle that is getting worse and worse.”

Carrier estimates put no-shows of booked containers as high as 30 percent, and they have struggled to recoup penalties against shippers that don’t deliver cargo as booked.

Maersk in June launched its own guaranteed ocean freight product, Maersk Spot, which assesses shippers a fee if they no show and for which Maersk pays a penalty if cargo is rolled. The product is not yet available on US trades, as it awaits the approval of the Federal Maritime Commission.

NYSHEX CEO Gordon Downes told JOC.com in the summer he’s confident other carriers will launch similar products to Maersk Spot and NYSHEX. Hapag-Lloyd and CMA CGM are both expected to offer similar offerings, according to sources with knowledge of carriers’ development plans.