Shippers, regulators will be watching closely as alliances launch services

Shippers, regulators will be watching closely as alliances launch services 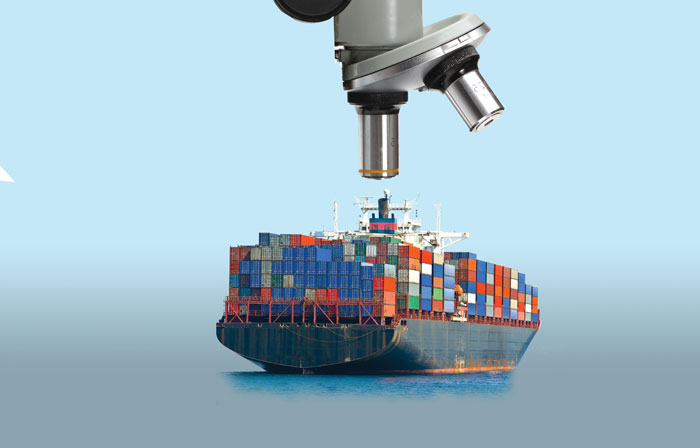 Question: When does two plus two equal 95? Answer: When the two new vessel alliances that will launch their joint services this month join the two existing alliances that are expanding. Together, the 16 container lines that are consolidating their routes and services will control 95 percent of the cargo volumes moving in the major east-west trades.

Will this reduce competition as too much market share falls into the hands of alliances, giving them more control over pricing and vessel capacity, as some critics say? Or will the increasing consolidation of services produce more efficiencies and economies of scale that will enable the carriers to survive in these days of overcapacity and plunging freight rates? There are no clear answers.

Maersk Line and Mediterranean Shipping Co. are scheduled to kick off their 2M Alliance this month with the 22 joint strings they plan to operate on east-west routes. At the same time, the Ocean Three Alliance among CMA CGM, United Arab Shipping Co. and China Shipping will launch five weekly trans-Pacific services, four Asia-Europe routes, four Asia-Mediterranean services, one Asia-U.S. East Coast service via the Suez Canal and one service dedicated to the Gulf of Mexico.

The two new alliances will combine some of the world’s biggest ships operated by the largest container lines in joint services that will make them larger than the two existing alliances, the CKYHE and the G6, each of which are expanding to compete. Evergreen has joined with Cosco, “K” Line, Yang Ming and Hanjin in the third-largest alliance. The G6 of APL, MOL, Hyundai Merchant Marine, OOCL, NYK Line and Hapag-Lloyd has expanded its services, but ranks fourth in pooled capacity in the east-west trades.

Beneficial cargo owners are watching how the alliances will impact their supply chains between Asia and Europe and North America. They have already had a look at the network of services announced by the 2M Alliance, but the Ocean Three had not announced its network by mid-December. It takes enormous time and effort to work out the intricate schedules for pooled services, especially considering CMA CGM has not previously consolidated services with China Shipping and UASC, which do share vessels in the Asia-Europe and trans-Pacific trades.

Some BCOs think consolidation will enable member carriers to manage capacity more tightly on the major trade routes, putting a floor under rates. But others are more worried that the pooling of services on bigger ships will produce ever more port congestion.

“As you get larger and larger alliances, you are making collusion easier, whether it’s legitimate or illegitimate,” said the logistics manager for one major U.S.-based importer and exporter. “They are not doing anything nefarious, but alliances make coordination of (vessel) supply easier.” If the new alliances result in a tightening of capacity, this would tend to put a floor under freight rates.

Carriers, whether in or out of alliances, are forbidden by antitrust regulators in China, Europe and the U.S. from colluding on freight rates or capacity. But the logistics manager said carriers heed signals from their alliance partners or other large carriers in other alliances, so when one carrier cuts capacity or rates, others tend to follow the leader. The logistics manager foresees more of this pattern. “It can lead to less competition by more signaling,” he said. “There will be fewer decision-makers needed to allocate or supply capacity, and fewer opportunities for rogue carriers to upset the balance.”

Jorn Hinge, president and CEO of UASC, also made this point, saying service consolidations by the alliances will help sustain rates in the east-west trades, because member carriers will be able to cut capacity by suspending unneeded port calls or entire sailings. “Rather than sailing with ships half full, they will suspend a string,” he told The Journal of Commerce.

But some analysts think the advent of the alliances will bring lower freight rates. “We’re going to see a constant increase in vessel size, which means a constant lowering of unit costs, so in the long term, we should expect rates to continue to decline,” said Lars Jensen, co-founder and CEO of Copenhagen-based SeaIntel Maritime Analysis.

He thinks members of the Ocean Three Alliance may be tempted to cut rates, even at the expense of profitability. “If these guys want to grow market shares, then you are looking at a very volatile environment,” he said. “China Shipping is not going to run out of money because the Chinese government is not going to let them go bankrupt. United Arab Shipping is owned by the gulf states, which can certainly supply furnish more capital if they need to.”

CMA CGM, which is majority owned by the Saade family, also might decide to cut rates to maintain market share because minority owner Robert Yildirim, is pushing for an initial public offering of stock so he can get his money out of the French line. “It has to come out looking like a success,” Jensen said.

The new and expanding alliances could put a cap on freight rate increases in the trans-Pacific and the north-south trades, because carriers already are cascading older, less fuel-efficient tonnage onto those lanes. “That’s been going on for several years already, but with all the big ships scheduled for delivery (in 2015), this will continue,” said Neil Dekker, director of container research for London-based Drewry Maritime Research.

The Ocean Three Alliance will get the largest injection of new vessel capacity in the next 15 months, taking delivery of 21 vessels with capacities of 12,000 to 15,500 TEUs, according to Drewry. Maersk Line will take delivery of 15 mega-vessels by the end of 2015, which will increase the average size of the ships deployed in the Asia-Europe trade by the 2M to 14,300 TEUs. As a result, Drewry said the alliances would have to cascade 60 ships onto other routes.

BCOs worry about the impact the big ships that alliances are deploying will have on the port congestion that has clogged major gateway ports over the last year.

“I’ve got a carrier in every alliance, and my biggest concern is the ports where they are going,” said Pat Moffett, vice president of global logistics at Voxx International. “I’m not focusing on what carriers are forming in what alliances, because I think the service changes are going to be negligible. I’m more concerned about the receiving piers and the real world of chassis availability and the impact of these mega-vessels on ports in the U.S. and overseas.”

Moffett doesn’t think alliances will have any impact on freight rates or carrier service. He said carriers had coped with port congestion last year as best as could be expected under the difficult circumstances. “If they can maintain that service through the alliances, I’ll be perfectly happy,” he said.

Elton Poisler, international logistics manager for ocean transport at DuPont, worries that the growth of alliances will mean deteriorating service. “We’re seeing more and more consolidations, but we're not seeing crisis planning across the board with ocean carriers,” he said at the NIT League Conference last fall. “We’ve got the 2M now, the G6. What’s the deciding factor in selecting an ocean carrier at this point? It’s the ability to get goods onto and off ships and meet that service commitment.”

Carrier reliability and performance are declining, which is why more shippers are turning to logistics providers and non-vessel-operating common carriers so they can get visibility into their oceanborne cargo, Poisler said.

Port congestion could worsen in 2015 as members of the two new alliances take delivery of their new ships. Global container fleet capacity will grow 8 percent by the end of 2015, after a 5.8 percent increase in 2014, according to research firm Alphaliner, while 2015 demand for capacity will only increase 3 to 5 percent. Carriers are scheduled to take delivery of 53 new ships ranging from 13,300 to 19,000 TEUs. These ships account for almost half of total new delivery capacity. They will be will deployed in the east-west trades, with the biggest vessels going to the Asia-Europe trade.

The G6 already calls at U.S. East Coast ports with ships of 8,500 TEUs. Alliance members have told the ports they will call with ships as large as 13,000 TEUs in 2016 when the Panama Canal’s new locks open to commercial traffic, according to John Wheeler, vice president of carrier sales at the South Carolina Ports Authority. He said Charleston already has ordered new cranes that can load and unload stacks of 22 to 23 containers across on ships of that size. Carriers already are calling at West Coast with ships of up to 14,000 TEUs.

In themselves, the alliances won’t be able to absorb any more of the global overcapacity of vessel space, but they’ll make it easier for alliance members to manage capacity. While a single carrier with two or three weekly services on one of the east-west trades can’t skip a sailing without causing disruption for its shippers, alliances with combined services can.

“If you are an alliance that offers five, six or seven weekly sailings, blanking one of those won’t be disruptive because the carriers can move the cargo onto one of the other weekly services,” Jensen said. “So from a shipper’s perspective, it is beneficial to have a broad portfolio available, and the only way a carrier can do that is through alliances.”

Shipper groups and regulators are calling for global regulation of carriers and alliances. Federal Maritime Commissioner Richard Lidinsky said the container industry needs a “global regulatory approach” as a counterweight to the size and power of the global carrier alliances.

Anne Lexelius, chairwoman of the maritime section of the European Shippers’ Council, also has called for greater monitoring of the global alliances to clarify the impact they have on service levels and pricing. She said global monitoring would produce more transparency and legal certainty for carriers.

Other analysts think carriers in alliances will behave because they will be under so much regulatory scrutiny. “Shippers are afraid carriers will start colluding on rates, but the four big alliances are not allowed in any way shape or form to coordinate pricing,” Jensen said.

In the end, he thinks alliances are a necessity if carriers hope to turn a profit. “The question shippers have to ask themselves is: Can they expect carriers to keep losing money? The carriers clearly need to focus on lowering costs, and the alliances are a way of doing that.”

Permalink Submitted by ferrullig@minds... on Jan 7, 2015 12:53PM EST
One point - managing capacity. The carriers did it ONCE; Late 2009 and in 2010 they anchored over 600 vessels. Strangely enough, they, the industry, made money that year. They haven't managed capacity since and as an industry haven't made money since. The point is that they "managed capacity" 5 years ago with no huge Alliances and haven't done it since. They don't need Alliances to do it, they proved that.

How to Improve OTIF: 15 Tips for On Time and In Full Delivery
Download
END_OF_DOCUMENT_TOKEN_TO_BE_REPLACED