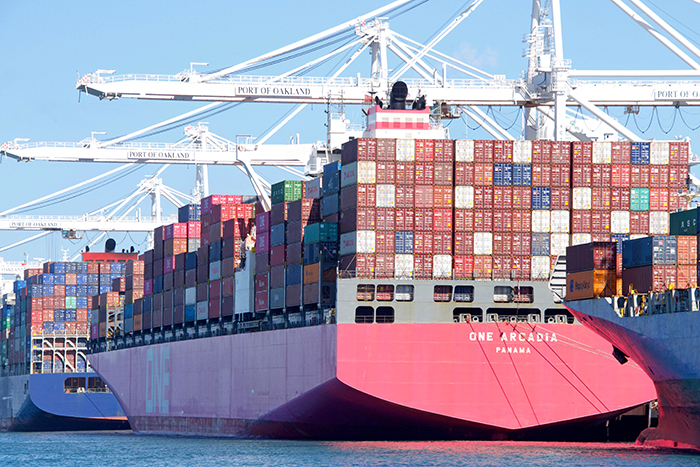 OCEAN Alliance carriers handled 24.7 percent of US imports from Asia in the first five months of 2019, followed by THE Alliance (24.7 percent), non-alliance lines (24.1 percent), and 2M plus HMM (22.6 percent), according to data from PIERS. Photo credit: Shutterstock.com.

Thanks to the recovery of Ocean Network Express (ONE) and incoming member HMM, THE alliance is set to dominate the Asia-US import trades next year with the OCEAN Alliance as the second-largest global trade lane stabilizes via carrier capacity discipline, despite tariff headwinds.

ONE has recovered United States import volume from Asia after a rocky roll-out a year ago, solidifying the dominance of the merged Japanese container lines in the largest US trade lane. US importers will experience an even greater impact in the trans-Pacific next April, when the relationship of HMM and the 2M Alliance of Maersk Line and Mediterranean Shipping Co. is ended and HMM joins THE Alliance of Hapag-Lloyd, Yang Ming Marine Transport Corporation, and ONE. Independent carrier Zim Integrated Shipping Services will replace HMM as a partner with, but not a full member of, the 2M Alliance.

Carrier market share in the trans-Pacific is not expected to change much in the next few months during what’s shaping up to be a weak peak season, in part because carriers will not add any new capacity. Instead, they will manage capacity as they did last year, by blanking individual sailings and deploying extra-loader vessels to handle import surges.

Generally speaking, carriers can only grow their market share by adding capacity and pricing it competitively. “You put capacity in, and you will get cargo,” Bill Rooney, vice president of strategic development at Kuehne + Nagel, told JOC.com. However, executives at four of the seven top carriers privately told JOC.com they are focused more than ever on higher-paying cargo rather than on chasing volume or market share.

ONE retained its position as the largest carrier in the eastbound trans-Pacific in the first five months of 2019, pushing THE alliance’s cargo volume market share to 24.7 percent of US imports from Asia, according to data from PIERS, a sister product of JOC.com within IHS Markit. The OCEAN Alliance — comprising CMA CGM/APL, Cosco Shipping/OOCL, and Evergreen Marine — was first with 28.6 percent, and 2M plus HMM was third at 22.6 percent. Non-alliance lines had a volume market share of 24.1 percent, according to PIERS.

On its own, HMM had a 5.8 percent share on the trade in the same period, while Zim accounted for 3.2 percent of Asia-US container volume in January-May this year.

Statistics provided by PIERS on carrier and alliance capacity market shares of Asian imports in the first five months of 2019 show little change in carrier or alliance rankings since the Aug. 31, 2016, bankruptcy of South Korean carrier Hanjin Shipping. By 2017, each of the major lines had picked up a portion of Hanjin’s business, and the market shares have remained mostly in a range of less than 1 percent variance for the past year.

Rather than seeking to gain market share by injecting capacity and undercutting each other on rates, as they did in the past, carriers have taken a more disciplined, surgical approach to managing capacity in an effort to better balance supply with demand and keep rates afloat.

In short, carriers blank a sailing as a lever to increase spot rates and then deploy an extra loader, keeping spot rates above a certain threshold while maintaining a relatively steady flow of cargo, said Kurt McElroy, executive vice president of Apex Group, one of the largest trans-Pacific non-vessel-operating common carriers (NVOs).

Blanked sailings have been surging in recent years. Last year, the number of blanked sailings in the trans-Pacific increased from 80 to 136, a 70 percent increase, according to analyst Sea-Intelligence Maritime Consulting. The year began with a “heavy blanked start,” according to Alan Murphy, CEO and co-founder of Sea-Intelligence, with 73 blank sailings and 640,000 TEU withdrawn in the first quarter, the highest in the past eight years. That trend continued in the second quarter, when trans-Pacific carriers skipped a record 31 sailings compared with 18 in the same 2018 period.

“Carriers are planning for supply to remain at 2018 levels over the peak season, but we expect them to cut quickly if demand starts contracting,” Murphy said.

Launched in April 2018 by combining the container transport operations of Japanese carriers NYK Line, “K” Line, and Mitsui O.S.K. Lines, ONE has seen its combined market share of US imports from Asia slip from 16.9 percent before the merger to 14.8 percent in January-May 2019. Shippers and NVOs have told JOC.com ONE lost some business because its service levels dropped during the transition period from three lines to one integrated operation, but that the carrier has begun to rebuild customer confidence.

“I knew this was coming right out of the gate,” said David Bennett, president, Americas at Globe Express Services, an NVO that contracts with ONE in the trans-Pacific. Going from three different organizations, each with their own structure, workforce, and operating philosophies, to a single unit made it difficult for the merged ONE to provide continuity of service to customers, he said.

One month after the lines merged in 2018, ONE CEO Jeremy Nixon told JOC.com that staff shortages in some locations had initially resulted in booking, documentation, and other customer service problems at start up, but the company had worked through those issues and was beginning to operate “as per original plan.”

“We went through some tough times last year,” said Kevin Krause, vice president of ocean services for third-party provider and ONE customer SEKO Logistics. Before the merger, SEKO booked cargo with each of the three Japanese lines based upon their individual strengths, which varied by origin-destination pairings, customer service levels, and price. It took most of 2018 for ONE to meld the best of each, but service levels are more consistent now, Krause said.

The Agriculture Transportation Coalition polls its members each year on carriers’ customer service performance and releases the results at its annual conference in June. In the survey, ONE jumped from being among the worst last year to second-best this year, said Peter Friedmann, executive director.

“It sounds simplistic, but they really focused on specific customers to give each of them a good experience,” Friedmann said. “What the customers want is when they call, someone answers the phone.”

ONE spokesperson Maria Bodnar said that with the growing pains of 2018 behind it, “ONE is fully-staffed, well-trained, and strategically focused. We’ve regained our customers’ confidence.”

The alliance changes scheduled to take effect in April could have a significant impact on market shares and port pairs served by the alliances in Asia and the US. Although details have yet to be worked out, THE Alliance, with HMM joining, and the OCEAN Alliance, membership of which will remain the same, are set to dominate the eastbound trans-Pacific in terms of deployed capacity.

The three alliances’ respective market share by volume was relatively balanced this year. But come 2020, the OCEAN and THE alliances will each control 35 to 37 percent of deployed vessel capacity in the trans-Pacific and the 2M Alliance, even with ZIM joining, will have a reduced share of about 15 to 16 percent, according to a projection from Sea-Intelligence based upon current market shares and assuming no major increases in capacity.

Possibly of greater significance, 2M could lose access to seven Asia-US port pairs previously provided by HMM strings, while THE Alliance would gain nine port pairs, according to Sea-Intelligence. However, those numbers are based on current services offerings in the trans-Pacific. The alliances next spring will have the option of changing vessel rotations and adding port pairs when they update their service networks. “Any speculation on 2020 port pairs is just that — speculation,” said Murphy.

But the main impact of a shift in alliances and vessel sharing agreements is not the loss — or gain — of vessels contributed by a given carrier. In fact, HMM contributed no vessels to the 2M Alliance, but rather took slots on the Maersk and MSC ships, and those carriers took slots on HMM ships in its independent services. The bigger loss for 2M will be that of the long-standing relationships between Seoul-based HMM and its large-volume beneficial cargo owner (BCO) customers in South Korea.

Although it won’t be able to replace HMM’s volume contribution from South Korea, Zim’s new relationship with 2M next April will bring established trade lane services to that alliance. Zim’s presence on the West Coast is confined to the Pacific Northwest (Vancouver and Seattle-Tacoma), but it will bolster 2M’s service to the US Gulf and East coasts. Zim will also contribute to a stronger 2M presence in Southeast Asia, a carrier executive said.

However, even basing an analysis on actual vessel capacity and port pairs served gives an incomplete picture, said Ernie Kuo, vice president of sales and marketing at Pacific International Lines. “It’s all about the allocation,” he said. Alliance partners must agree upon how many slots to apportion to each of the member lines, he said.

As for the peak shipping season now under way in the eastbound trans-Pacific, no great changes are in store. After a disruptive year in 2018 that was marked by front-loading of merchandise that should have moved in the spring of 2019 — but was shipped early to get ahead of tariffs threatened by the Trump administration — carriers and shippers anticipate less volatility this peak season.

US import volumes from all of Asia were up 2.1 percent year over year through the first seven months of 2019, but imports from China were down 4.4 percent, according to PIERS. The Trump administration's 10 percent tariffs on the remaining $300 billion of US imports from China not already under tariff were delayed until Dec. 15 this week, so there should be no impact on peak-season volumes.

Unlike in the pre-Hanjin era, carriers are taking a more “tactical” approach in the eastbound trans-Pacific, moving quickly to blank sailings when bookings are weak and deploying extra-loader vessels, usually for the largest retailers, to handle cargo surges.

As a result, any capacity additions that will occur over the next three months will most likely come via deployment of extra-loader vessels on single voyages. Industry analyst Alphaliner reported last month that Cosco, Maersk, and MSC will deploy six extra-loader vessels in July and August, mostly to the East and Gulf coasts, so third-quarter results could show some movement in market shares. However, a second carrier executive said most of the vessels will be smaller than the 10,000-TEU-plus ships that dominate the trade, so variances will be small.

Unlike last year’s demand volatility, shippers and carriers this year forecast a return to normalcy, meaning volumes are beginning to accelerate in August as expected, space is tightening, and some sailings are beginning to overbook.

Kevin Higgins, CEO and partner at logistics provider Orion Global Partners and a former logistics executive at Walmart, sees a return to a “fairly typical peak” this year, and all that that implies. Customers anticipate that spot rates will increase during the peak months. However, the rapid escalation in spot rates that occurred last year made it difficult to plan supply chains, he said.

Spot rates this month are down by double-digit percentages compared with August 2018, according to the Shanghai Containerized Freight Index published under the JOC.com Shipping & Logistics Pricing Hub. The spot rate to the West Coast on Aug. 9 was $1,474 per FEU, down 28.7 percent from the same 2018 period, and the East Coast rate of $2,787 per FEU was down 14.2 percent year over year.

Spot rates to the East Coast have remained firmer than West Coast rates, due to higher load factors. “The all-water services are very strong,” said Lawrence Burns, senior vice president of trade and sales at Hyundai America Shipping Agency. This is not unusual early in the peak season when lower-value holiday shipments with lower inventory carrying costs move in large volumes. Carrier executives expect West Coast services to fill up in late September-October.

"Dominate" - as have control