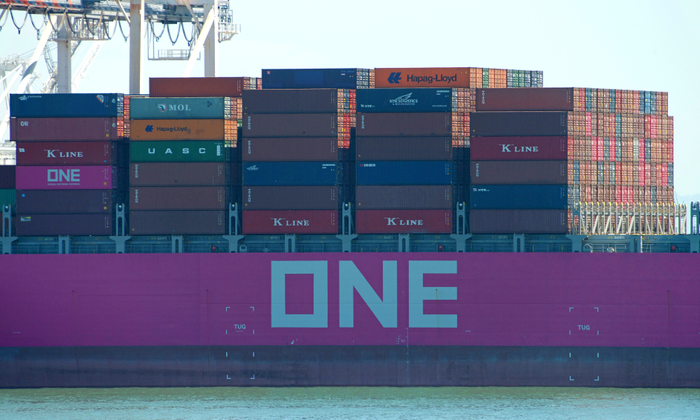 ONE sharply turned around its loss-making performance last year with a positive result in the first quarter of a new financial year. Photo credit: Shutterstock.com.

Ocean Network Express (ONE) made a positive start to its second year of operation, recording a 39 percent increase in revenue during its first quarter that took the carrier to $5 million in net profit.

The result was a sharp turnaround from a year ago when setup costs involved in the merger of Japanese carriers “K” Line, NYK, and MOL, and launch problems with the new ONE line hurt earnings. Those issues dragged down profitability in its 2018 first quarter, and although ONE ended the year with a loss of $586 million, the carrier has managed to steadily improve its performance.

In the first three months of fiscal 2019-20, the Singapore-based carrier reported more stabilized services and improved rates on the trans-Pacific, South America, and intra-Asia trades. It also saw a significant improvement in volumes and a reduction in terminal and inland costs.

In its results statement, ONE noted that on the Asia-North America eastbound trade, freight rates for long-term contracts improved and were felt on the balance sheet since May. The carrier said rates in the trans-Pacific spot market remained firm, but there were reduced shipments by some customers as a result of additional US tariffs on Chinese goods.

ONE carried 669,000 TEU from Asia to North America and kept utilization at 89 percent through the reduction of 12 sailings during the first quarter, a move the carrier said was not foreseen at the beginning of the year.

On the Asia-Europe westbound trade, although rates hovered around the same low levels as 2018 with supply growing faster than demand, overall demand remained relatively strong. A total of 460,000 TEU was moved on the trade, while a cut in service frequency by five sailings kept utilization from falling below 87 percent.

ONE expects to be profitable for the first six months of its 2019-20 financial year ending next March 31, but its forecast takes a gloomy turn in the second half when the carrier expects rates to deteriorate on Asia-Europe, and demand to fall on Asia, Europe, and North American trades. The full-year expectation is for ONE to make a net profit of $90 million, an increase of almost 6 percent over previous guidance.

As ONE reported its first quarter results, Hong Kong-based OOCL announced its operational update for the first six months of the year.

Total first half volume on all OOCL trades increased 3.2 percent to 3.37 million TEU, while revenue grew 6.5 percent to $3 billion. Strong volume gains were reported on Asia-Europe, which was up 8.5 percent to 692,000 TEU. It also booked a solid 15 percent increase in liftings on the trans-Atlantic, to 240,000 TEU.

No profit and loss figures are given in OOCL’s operational update, but the increase in Asia-Europe volumes was accompanied by a 9.4 percent increase in revenue, while trans-Atlantic liftings came with a 16.3 percent revenue hike.

The healthy increase in volume on the trans-Atlantic is revealed by data from PIERS, a JOC sister product within IHS Markit, which shows US imports from Northern Europe up 6.6 percent in the first half of the year compared with the year-ago period, with imports from the Mediterranean up almost 11 percent.